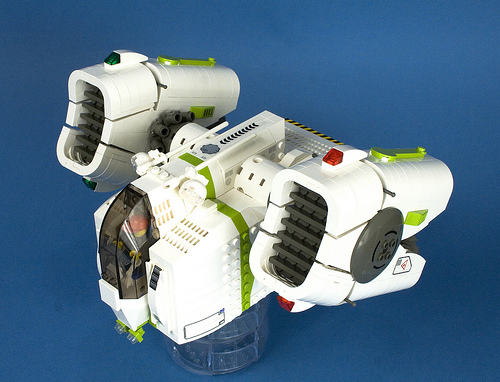 Attentive readers may have noticed that I haven’t posted for about a month. My father recently suffered a severe stroke, and I’ve been very busy and distracted as a result. I only bring this up because it has lead me to really think about the role that LEGO plays in my life. My friend Gary McIntire suggested that it was worth putting some of my thoughts in writing, and I thought I’d share.

I’ve realized that for me, and I expect for others as well, LEGO is more than just a hobby. It’s a distraction from the stresses of everyday life, a release. There’s something therapeutic about diving in to a bin of plastic bricks and creating something that is heartening, regardless of what may be going on in other aspects of life. I’m hoping that some of our readers share the same experience with LEGO as something more than a toy, and that they may want to share as well.

I’m actually posting a LEGO creation, while I’m at it. This is small cargo shuttle, that I’ve been building over the last five weeks or so. This ship is intended to be the space equivalent of a box truck, like this. I imagine this particular ship as having a lot of light-years under its belt, used for longer journeys than originally intended, so there’s a hammock in the cargo bay. As I explained above, I had a lot of time to think about this creation, even if I didn’t have much time to build or blog. I also imagined the that it might not always have been docked in the nicest of space neighborhoods, so I built after I took some photos, I covered it in graffiti. 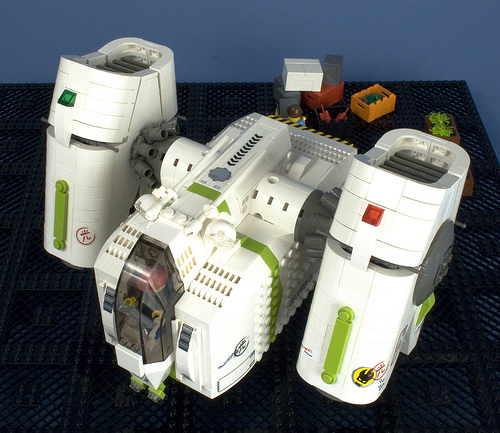