In part 1 and part 2 of our interview with Mark Stafford, we found out how Mark (Nabii) got his job and what it’s like to work for LEGO as a Designer. In our final section, we ask him about the differences between being a regular fan and designing official sets.

Is it easy working with as many bricks as you want? Why aren’t official set designs more like the best designs from LEGO fans? Read on to find out…

The Brothers Brick: How does your hobby building affect your work building for the better? And the worse? And vice versa?

Mark Stafford: In the beginning it made my work building overly complicated, I’d build SNOT just for the sake of hiding studs. 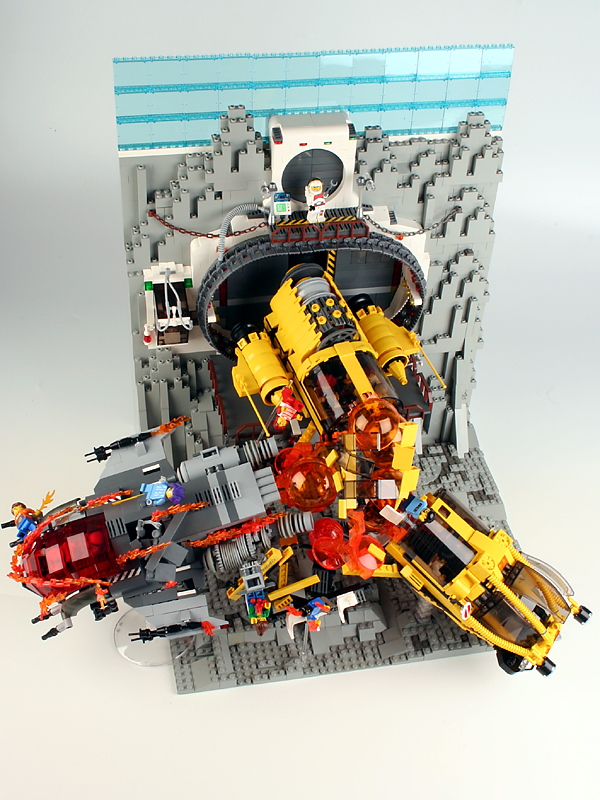 Now I only do this at work when it’s the only way to make the shape I need. The LEGO Company is proud of its studs, and a model without any at all is actually frowned upon.

Of course the more you do anything the better at it you will become, and I think my fan models now use fewer elements, look cleaner and are more stable.

Also if I find an interesting parts combination at work that can’t be clearly explained in building instructions, or is an illegal build, or is just not stable enough to be played with, then it may end up in my fan MOCs.

TBB: Is there anything you think AFOLs should know about the difference in building style between work and play?

Mark: Only that TLG’s style is dictated by its target audience; we make the sets for kids and they have a different tolerance for frustration, amount of time it takes to find elements in the pile, lower manual dexterity and much reduced strength in their fingers in comparison to adult builders.

At home I can do anything. Huge areas of my MOCs can hang on one or two stud connections, whole models can be built in a single colour, sections can be built sideways or shoehorned into position and I can do unspeakable things to mini-figures!

TBB: How many people are involved in the complete process of designing a set from brainstormed ideas to the finalized product?

Mark: Wow, that’s a tough one. Especially for play-themes! First off there’s the idea for the theme, this might be generated internally at PMD (the building all the designers work in) or it may have been created in our concept labs, coming through Japan, America, Germany, Spain, and the UK before more polishing in Billund. This gets a universe to be as appealing to our target audience (normally boys from 6 to 12) as possible. The theme is then turned over to a group at PMD, here we will take some of the already successful ideas and “models” (often glued together and featuring found or created elements) and we will then build sketch models that are buildable in LEGO bricks. Sometimes just the essence of an idea from one area can be turned into a huge project elsewhere.

Once a theme has been given a go ahead the sketch models are roughly sorted into the price points that are needed. A model has to be carefully considered, it’s basic function and qualities looked at and if it needs to be reduced or increased in size in order to maximize its potential, the redesign and rebuilding at this stage is one of the toughest parts of the process.

Sometimes the sketch is your own, sometimes other people’s. We have weekly design meetings where the entire team gets to have input on what’s working and what isn’t on each other’s models, not to mention the constant advice we offer to each other every day. Then there’s input on buildability by our target age group from our building instructions experts, legality of our builds from Design Lab, and the overall consistency between models in a project is maintained by our Design Lead.

And that’s just design; there’s also production, packaging and logistics to get the model out there, and sometimes consideration of these aspects can bounce back and affect the design process.

In fact it’s pretty egotistical to claim any design entirely as my own given the huge team behind every set, but I do, so I guess I must be hugely big-headed!

TBB: Does this give you much space to add your own personal style?

But that’s a pretty lame answer because I think my building style and preferences do come through in the sets I’m Model Designer on and even given everything I laid out in the last answer there’s actually tons of room to create models to my liking. (And when I’m not too keen on the actual model idea I can at least try to get a lot of cool pieces into it!)

TBB: How about choice of colour scheme? Is this collaborative or ‘from above’?

Mark: It varies, if there is an overall colour scheme, like Power Miners, we come to a decision in our project group. For Power Miners (I know that one is controversial with AFOLs) we threw around a few ideas then changed a model in Photoshop into about thirty different colour combinations and carried out a little consumer testing to see which combination had the most impact against the dark underground backgrounds we had in mind for the boxes.

We had been to a mining museum in Germany and saw most mining machines were yellow or white with cutting tools painted red or orange, and a few were bright green or light blue, (mining equipment has to be bright because underground it is very dark!) then we looked at LEGO’s existing line up: Mars Mission was very white, and City’s construction was yellow and Coast Guard orange, and an underground theme in dark colours would disappear into the dark background. So we had already decided green was probably the main colour to focus on and most of our colour schemes revolved around a green main colour. Eventually the colours settled on were lime green and orange and I have to agree this makes the most impact and really catches the eye and jumps off the toyshop shelves.

This early version of the Crystal Harvester shows much less orange, but as you can see the vehicle tool (the big wheel at the front) kind of disappears into the rest of the vehicle.

However in Exo-Force each set could be a different colour and so we had plenty of room to experiment. My 8115 Dark Panther was actually developed in black and red, then I built a version in Teal, Orange and another in Purple, and we eventually chose the purple.

TBB: Do you or other designers look at AFOL work when designing a product?

Mark: Not so much. Some of us keep up to date with the AFOL sites and postings. We like to look at cool MOCs and will often see a piece used in a way we have not considered, but we never look for ideas for specific products. We’re more likely to look at concept art websites, photographs and books to see interesting shapes or buildings and then envision them in LEGO bricks.

Besides, where’s the fun in copying someone else ideas? The whole point of LEGO bricks is to make your own creations!

TBB: Anything else you’d like to add about your job?

Mark: It really is as cool a job as you think it would be when you’re a kid!

Although after building all day at work, there is as many fans suspect, a lot less drive to build in my spare time and for many other designers no desire to do this at all.

I’d also like to clear up a misconception: We don’t get free LEGO bricks, and for home building we buy sets like everyone else. The staff shop has a discount of 50% off the Danish price, but that’s just down to about the US retail amount so we don’t have access to unlimited bricks at home any more than any other fan!

TBB: And finally, what MOC of yours would you most like to see converted into an official kit? 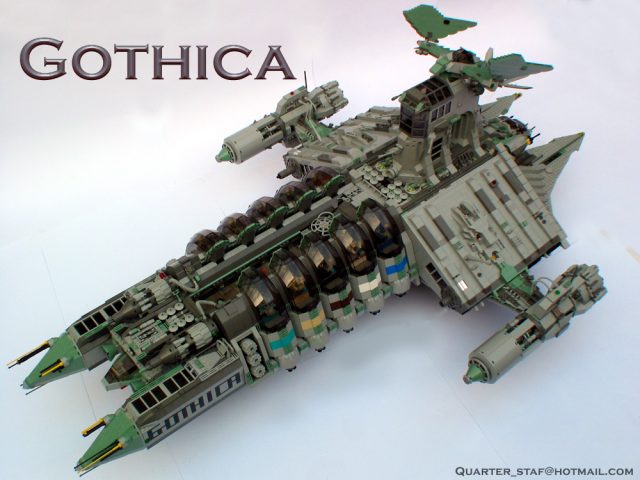 Mark: The Big Boys Toys is the only one of my MOCs I think has what it takes and that I could face revisiting and working on for four months, though the military aspect might need to be toned down before it could be a set, and a lot of the elements are no longer available so there would need to be considerable redesign.

It would be nice to make a completely new huge sized spacecraft set (Gothica sized or bigger)… but all you annoying adult fans keep asking for Star Wars, Café Corners, Volkswagen Beetles and Eiffel Towers! :P

A huge “Thank you!” to Mark, his boss Matt Ashton, and Steve Witt for working with us on this interview.