Well, this is the moment you’ve all been waiting for! Its time to actually vote on who will possibly represent The Brothers Brick readership community as a LEGO Ambassador. So come out of your dens, caves, lairs, or cubbyholes and vote! Reserve those future complaining rights and vote now! Because if you don’t vote now, you can’t complain later. :)

Remember, any given community group can nominate up to three people, so we’ve set up the poll so you can vote for up to three people. We will be sending the names of the top three to LEGO, along with the number of votes that each one got. 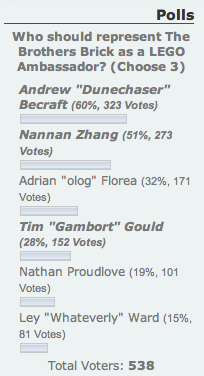 UPDATE (5/24/08): Voting is now closed. I’m replacing the poll with a screen shot of the results.

Make sure LEGO hears your voice. Stand up and be counted!

Of course, this isn’t the only nomination and voting process going on in the broader LEGO fan community. Make sure you participate in the nomination/voting process in other communities you also belong to:

6 comments on “The time has come, the Walrus said, to vote on many things”