Dave DeGobbi of Burnaby, B.C., Canada attended NWBrickCon 2006 over this past weekend, and stole the show (well, at least the steampunk section) with his Goliath airship: 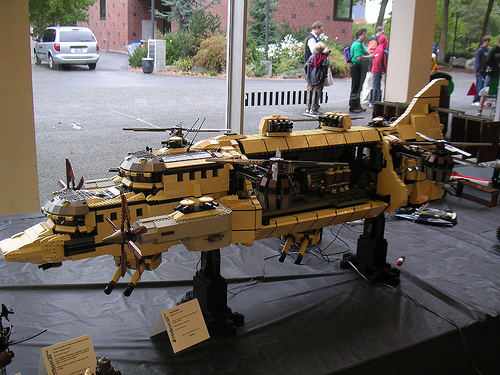 Naturally, the Goliath won the Best Steampunk prize for the show! Inspired by my favorite movie of all time, Hayao Miyazaki’s Laputa: Castle in the Sky, the airship includes many cool features:

Dave says it took him about eighty hours to build, based on three years of parts collecting. The movement is powered by seven regular LEGO motors and one micro-motor. He estimates that Goliath includes over 7000 LEGO elements, which he spent more than $1000 CDN to purchase. (Multiple Yoda sets on clearance helped with the tan.)

Those of you who transport large LEGO creations may also be interested to learn that Dave included a 3/4″ x 1 1/4″ x 4′ Brazilian cherry beam in the Goliath, which makes it strong enough to survive long trips. As an added bonus, it makes the airship strong enough to hang from the ceiling. Here’s a picture of the DUPLO cradle and straps he uses to secure the Goliath: 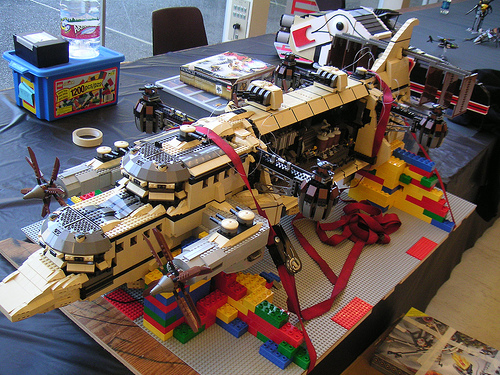 Be sure to check out the full photoset on Flickr for lots of detailed shots. Dave’s awesome airship has been showing up in lots of Flickr photostreams, so you might see some new details in other people’s photos as well. Thanks for sharing this info and sending me the video, Dave!