After a very early morning in order to get to the LEGO Store by 8:00 for breakfast, I’m fairly exhausted so this’ll be short.

First off, I’m an idiot, and so I forgot my camera on its charger. Josh took plenty of pictures, but he’s going to upload them when he gets home. In the meantime, Mark Neumann has also been posting NWBrickCon pictures to his Flickr photostream. In lieu of pics for today from me, check his out.

EDIT (1:45 A.M.): Flickr user David Caley also visited NWBrickCon today and has a good chunk of pictures from the public hours. Check out his photoset on Flickr.

Second, today was a complete madhouse, with public hours from 11:00 to 4:00. I met my office-mate Crystal and her family and showed them around the exhibition hall. We went out to lunch, where Mike Rayhawk, a fantastic illustrator and graphic designer who created much of the concept art and accompanying illustrations for LEGO’s recent Knight’s Kingdom II theme. One interesting tidbit I learned from him is that LEGO needed some last-minute face designs for some marketing people, and he whipped a few out based on people he knew. His father inspired Vladek, for example. The minifig designers at LEGO ended up using Mike’s face designs for the characters, and despite some of the complaints I’ve heard about the “jellybean” knights, I think they’re some of the best face designs in years.

Third, I attended a presentation by Brendan Mauro about the “8cre” standard for modular castle layout design. I’ll try to convince Brendan to upload his presentation somewhere, and I’ll link to it when it’s up. Well worth the read, with lots of cool techniques for large layouts.

Finally, I want to take a moment to talk about prejudice. I’ve found that prejudiced people are generally people who haven’t encountered the person or idea they’re prejudiced against. Well, I was prejudiced against non-official, “custom” parts integrated into LEGO creations. Between his presentation yesterday and seeing his goods up close today, I couldn’t help myself. Will Chapman of BrickArms is a really nice guy, with a passion for high-quality minifig accessories. By the end of the day, I ended up with two sets of his awesome modern weapons. My name is Andrew, and I’m no longer prejudiced against custom parts. Heh heh. Anyway, here they are, minus an M4 and a handgun of some sort I put in Jayne Cobb’s hands: 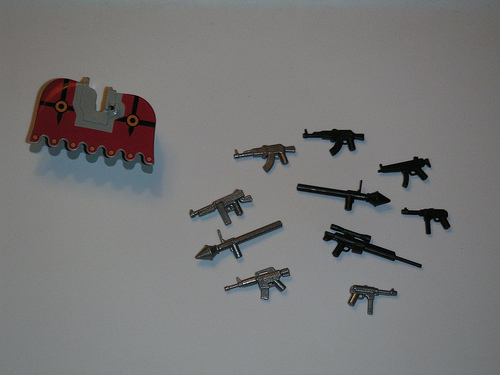 Oh, and the horse barding — one I didn’t have — is from our very own Josh. Thanks dude!