Instead of writing up the day’s events, I’ve spent the evening getting started organizing my NWBrickCon pictures. I split my pictures into creations and events. I haven’t finished adding titles, captions, and tags to everything, but if you see something you want to know about, post a comment on Flickr and I’ll add the missing information.

One housekeeping note: Dan Sabath suggested during the closing ceremonies that all of us blogging NWBrickCon and posting pictures to Flickr should all use the “NWBC2006” tag so the posts and photos will be easy to find. Great idea, Dan! For your subscription convenience, here’s the Atom feed for pictures tagged “NWBC2006” on Flickr. Looks like I’m not the only one with photos in that feed. Hurray!

Got up fairly early this morning to make it downtown in time for the “Wacky Racers” competition. I joined event organizer Dan Sabath for a quick cup of coffee. I hadn’t brought anything to race, so Dan explained that the object of the game depends on various arbitrary rules. This year, in addition to distance traveled, the winning score would include a calculation of the distance that the minifig pilot was ejected from the vehicle. Here’s the ramp down which the doomed drivers would be sent: 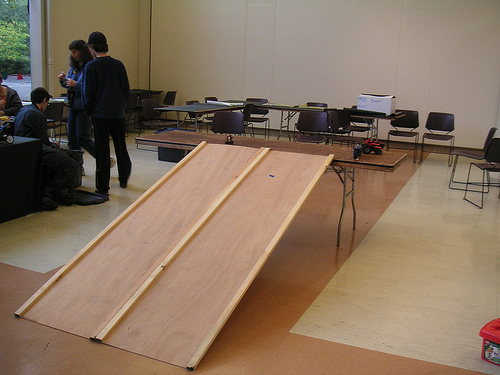 Competitors began trickling in, and Dan convinced me to send Leftenant Cavendish down the ramp in his marvelous amphibious contraption. Here’s a lineup of several competitors and their vehicles: 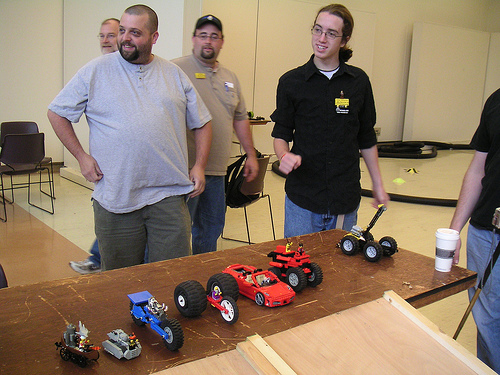 The race soon begain in earnest, with various levels of success. The three-wheeled racer with huge wheels made it all the way to the end of the room, but failed to eject the driver. Our very own Josh (L) and Tony Hafner (R) get their vehicles ready: 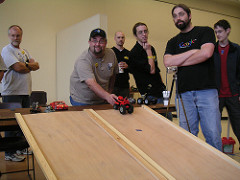 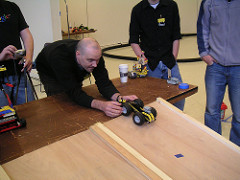 Tony won when his racer ejected its driver (from a rubber-band-powered catapult thingie) a whopping 36 feet.

The wacky racers event was followed by voting for the awards later in the day, and then by four more hours of the general public taking a look at our creations. By the afternoon, we were all pretty exhausted, operating on little sleep, and quite probably fighting off half a dozen bugs from the thousands of parents and kids coughing and sneezing on our LEGO.

At 4:00, we began taking down the displays, folding tables, pulling up tape, and so on. Closing ceremonies were held at 5:00, during which the awards we voted on earlier were presented. By that point, my camera’s batteries were long dead, and it didn’t occur to me to take notes, so I’m waiting for the official winner’s list on the NWBrickCon Web site or on the SEALUG mailing list. Congrats to Josh for second place in the Castle category for his awesome Lighthouse! My own steampunk creations had no chance against Dave DeGobbi’s Goliath.

With closing ceremonies out of the way, we finished packing up, stood around chatting for a while, and headed home. Counting two previous SEALUG meetings, this was only my first “in-person” LEGO event, and I’m excited for more. Getting to spend time with Josh was fantastic, and getting to know so many other LEGO fans I’ve interacted with online was great. What was kind of funny, though, is that I didn’t make the connections between some people in real life and their online personas until fairly late in the weekend, and many people didn’t figure out I was “Dunechaser” until a couple days into the ‘con. Case in point: I’m kicking myself for not putting Mike “Count Blockula” Crowley’s familiar face with his name until we were wrapping up and heading out. Sorry dude!

Finally, a huge round of virtual applause to Wayne Hussey for organizing a fantastic event and to Sean Forbes for being the public face throughout the weekend. So Wayne, when do you start accepting checks for next year’s ‘con?