The Great Wall is often cited as one of the wonders of the medieval world, at its peak stretching more than 5,500 miles across China. In LEGO form, 21041 Great Wall of China represents the oldest structure in the Architecture line and the first to include significant landscaping. It is also the first LEGO Architecture set designed to be modular, creatively constructed to connect multiple copies. The Great Wall includes 552 pieces and retails from LEGO for $49.99 USD. (EDIT: The set is currently on sale at Amazon.com for $39.99, making it easier to buy multiple copies.) 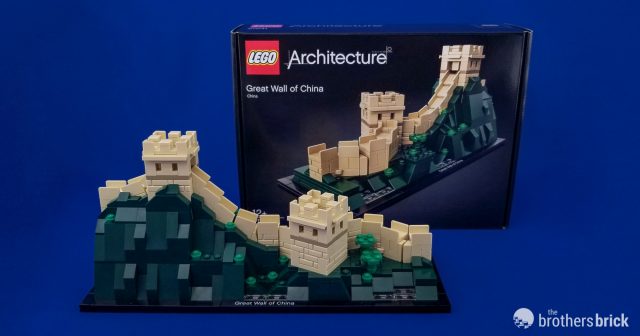 The Great Wall is a departure from the Architecture sets of modern buildings and significant landmarks we have come to know and love, though it feels at home with its dark green and tan styling as well as its black tiled base. While similar in size to the 21006 White House, the Great Wall is hefty and designed to be viewed from all directions. The set was released earlier this year, but with the holidays coming up, we wanted to take a closer look.