Builder Andrew of CRCT Productions gives us one of the lesser-known hero ships of the Star Wars galaxy, the Starhawk-class Battleship. A creation of the New Republic in the final days of the Empire after the events of The Return of the Jedi, the Starhawk was a smorgasbord of cannibalized Star Destroyers and other warships. Three of them fought valiantly in the Battle of Jakku, taking down a Super Star Destroyer with its powerful tractor beam cannons on the nose. 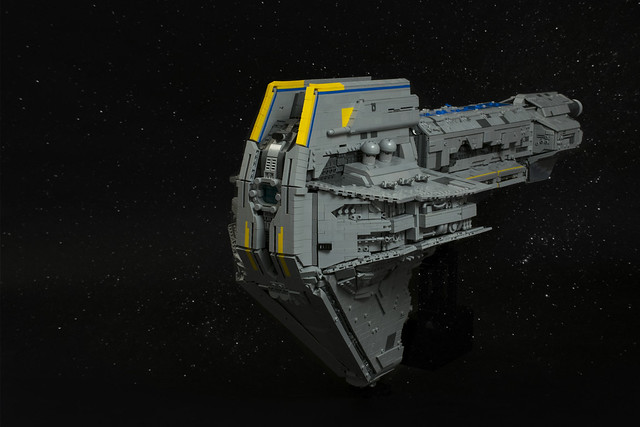 This build is incredible. For having little source material, Andrew did a fantastic job at getting all the known details into his Starhawk. The yellow and blue markings are a nice touch, breaking away from the Imperial grey seen on nearly all the large warships in the Star Wars films. Other features include the smooth surfaces, neat angles and attention to the smallest of details, which give this LEGO creation the illusion that it might not be LEGO at all: it might be the real deal, an actual Starhawk.