Time flies. It has been 14 years since my LEGO aircraft were first featured on The Brothers Brick. Perhaps surprisingly, I still have most of the models I had back then. However, although I updated several of them over the years, my F-16 Fighting Falcon, commonly known as a Viper, and my F/A-18 Hornet were now really showing their age. My jet models usually have a retractable undercarriage and that takes up quite a bit of space. As a result, the fuselages on the old versions were about a stud too wide for their scale. So, my main goal was to make those narrower. This obviously requires major changes and, rather than updating the existing models once more, I decided to rebuild them from scratch. 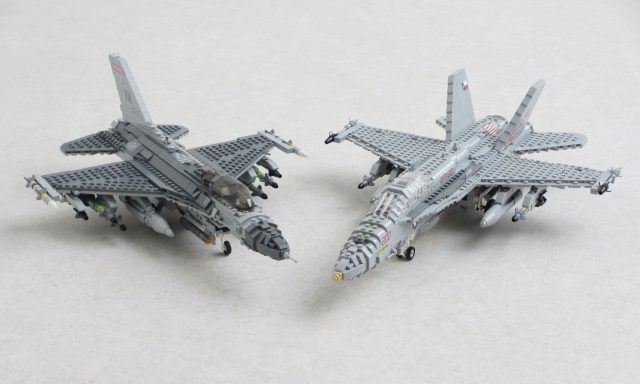 Using curved parts, wedge plates, and various brackets that didn’t exist when I built the originals, I further improved their shape. Some things have stayed the same, though. Lately, I have built some studless models, but it is no secret that I do like studs on my models. To fit with my older models, these two still have them. And while the old versions may have been old, they had features that I liked, such as the design of the cockpit canopy on the F-16 and much of the design of the main landing gear on the Hornet, so I copied those. While I have become somewhat fatter as I have reached middle age, my models are now slimmer and far more elegant. And with these changes, they’re good to go for another decade.