LEGO is rolling out an update to its online ordering systems for individual bricks in February. The current Bricks & Pieces system is being merged into an overhauled Pick a Brick platform. The current systems are fragmented and difficult to use. While most fans are familiar with online Pick a Brick, many are completely unaware of the Bricks & Pieces platform, which is an offshoot of the replacement parts system and is only accessible via a small link in the footer of LEGO’s website. Screenshots we’ve viewed of the new platform indicate that it will retain Pick a Brick’s more robust search features rather than Bricks & Pieces’ limited search capabilities. The new platform will allow users to search the full catalog of available elements in a single location, and prices will be standardized across the selection so elements will now have the same price regardless of color. The company says that some specialized parts may see price increases, while some elements will become more inexpensive. We cannot confirm how significant or widespread these prices changes may be. The update is planned to be available to the Netherlands, France, Germany, and the UK in early February, followed by Canada, Australia, New Zealand, and the US in late February. Other markets will follow later. 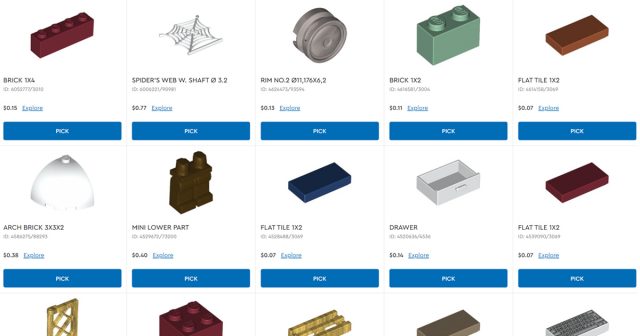 Under the new, merged system, LEGO will select 1,600 of its top-selling elements to be clearly labeled as “Bestseller” and will be warehousing those elements in the United States and Poland. The company says that orders of Bestseller elements should be fulfilled within 5 working days, down from the 13-18 days with the old system. Orders of standard, non-bestsellers will still ship from Billund, Denmark, using the current, slower fulfillment process, but customers should be able to split their orders within a single purchase, so adding non-bestseller items to your cart won’t delay the whole order. All orders under the new system will now be eligible for promotions (currently Bricks & Pieces orders are not). Orders must meet a minimum threshold of €12 to waive an order fee of €3 for Bestsellers and €6 for non-bestsellers. Fees in other regions have not yet been disclosed.

LEGO will also be making the in-store Build a Mini experience available online, including elements that have been exclusive to it. However, this system will be separate from the merged Pick a Brick and Bricks & Pieces platform. Read the full press release from LEGO below.