If you stay in the LEGO game long enough, you’re bound to run into the problem shelf space. Specifically, the problem of not enough of it. Andrew Lee is combating that issue with Scumbag City, a multi-storied metropolis that ingeniously hangs on Andrew’s wall. 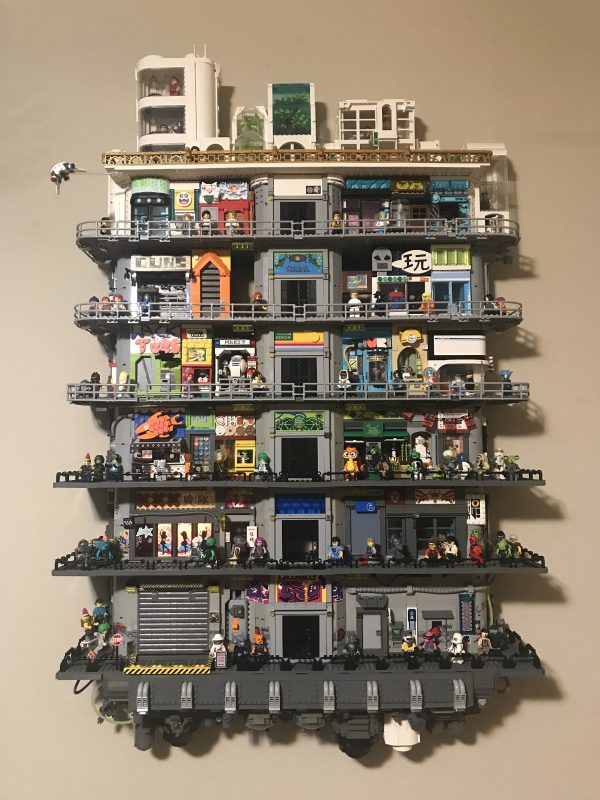 To achieve this gravity-defying effect, Andrew has built the bottom-most layer around an already existing wooden shelf. The upper layers are secured with screws placed into the wall through Technic brick holes. From there, Andrew has installed a central elevator shaft that allows the citizens to move between levels. Each level was then outfitted with storefronts and restaurants, each equipped with front facades that can be easily removed so you can see the action within.

I particularly like the way this build so clearly tells the story of life in Scumbag City. The top-level, with its large windows and gold fencing, is clearly the home of the city’s elite. The next three levels feature large railings and brightly colored shops and restaurants. The lowest levels have smaller railings, industrial areas, and businesses like a gentleman’s club. No doubt life on the lower levels is a little harder, if for no other reason than it’s probably pretty noisy living right above the engines the keep Scumbag City aloft.