Debuting at Brickworld Chicago back in June, builder Casey McCoy represents LEGO’s Black Falcons well with this epic monastery. And this creation is jam-packed with awesome details! Let’s start with the exterior walls, which alternate between gentle curves and harsher slopes. All of this on top of a beautiful smattering of textured brick that draws the eye to key points: the ornate stonework around the entrance, the elegantly simple bell tower, or those stunning stained glass windows. I appreciate the common architectural themes between the upper and lower structures. However, with the addition of beveled corners and more intricate stone work on level #2, the build tells a story of the later addition of the upper section, perhaps after the monastery was established. 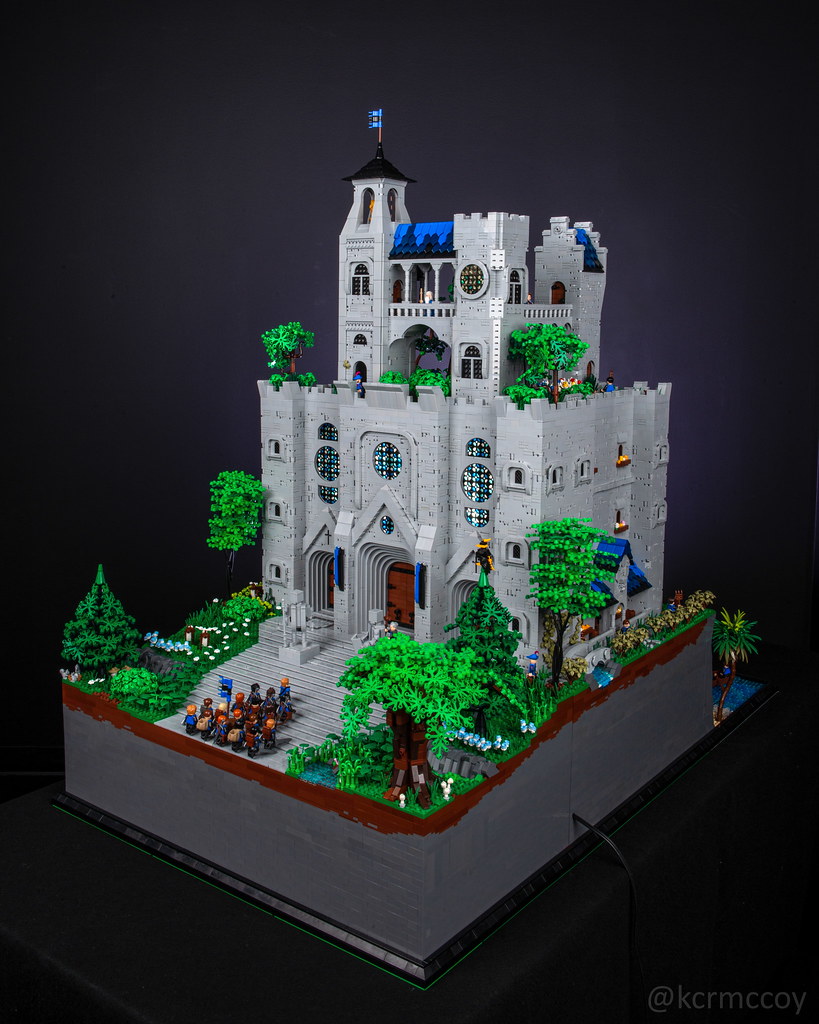 Focusing in around the front doors, I absolutely love these two statues! Depicting the more scholarly and noble arts of the age, these brick-built figures represent the peaceful nature of the build. This is a sanctuary, not a place of war! The pop of brown from the church’s front doors is a welcome contrast to all the light gray stone surrounding it. Casey’s use of the exposed stud here is excellent, adding depth to a typically 2-D object. From this angle, we can also see a bit of the lush wilderness surrounding the structure. Bushes and trees are expertly placed so as to set a proper location for the monastery as being amid the forest, but not so many as to encroach on the site and take over. And atop one of the firs, the faction’s namesake: a black falcon beautifully molded out of bricks. 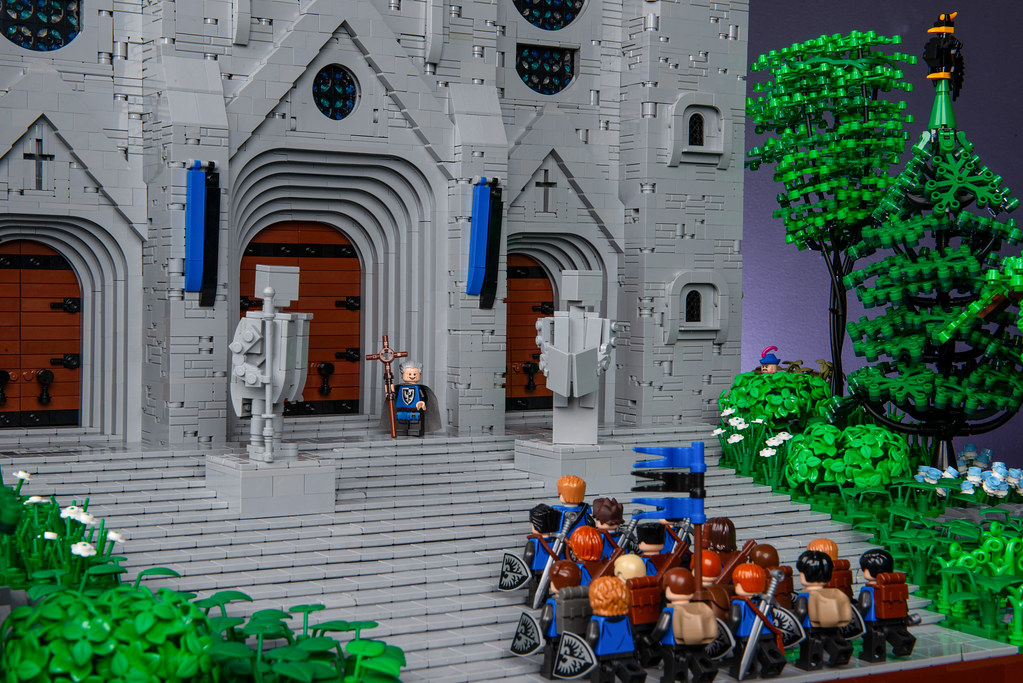 The interior gardens are just as lush as the vegetation outside. Two apple trees are tended by the abbey’s residents, using a cleverly-constructed ladder. The small scenes posed up on the second level provide a look into their lives. A bard playing a song on the balcony serenades the apple harvesters, while a pair gaze over the ramparts with a sextant in hand, no doubt surveying some object in the distance. One of my favorite details is in this scene: the trunk of the red apple tree. The gnarled flow of the hidden roots up into the base of the trunk feels so intentional, leading to a smoother stalk up into its fruit-filled leaves. 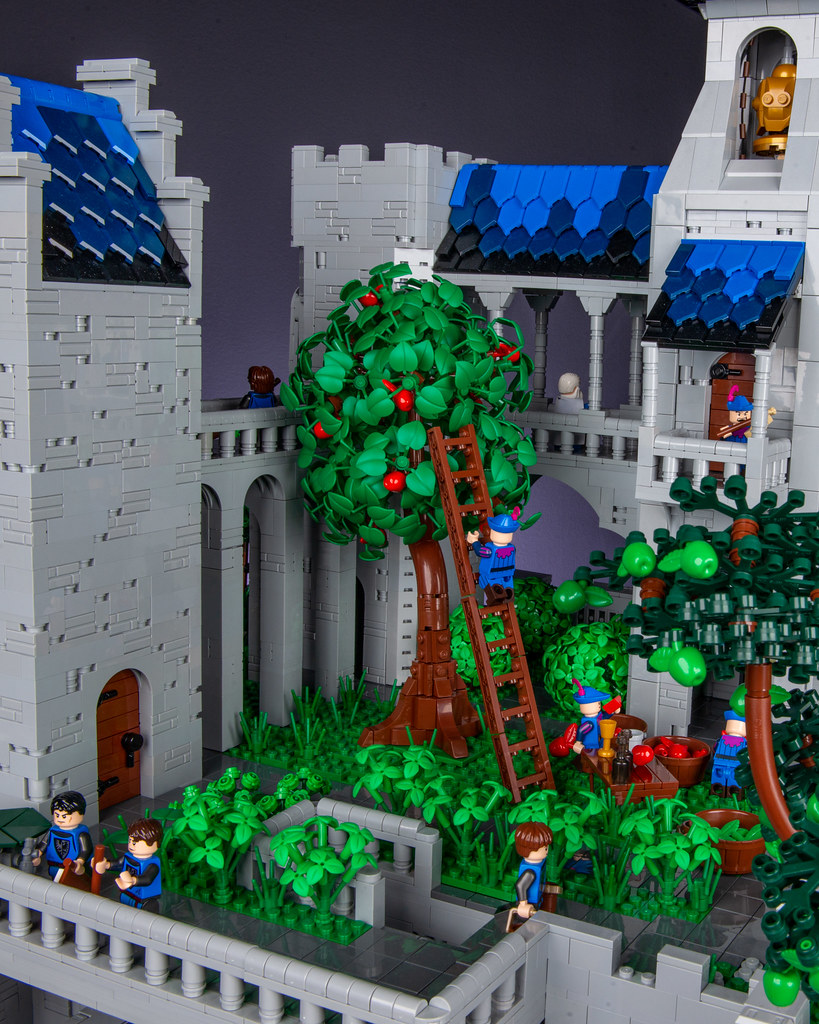 Finally, we arrive at the back of the build. This priory was constructed on a cliff overlooking a body of water. And we can see both a rope ladder and waterfall leading down to the shore. The rockwork here is spectacular, just as craggily and rough as the monastery is smooth and ordered. And I love the use of different transparent blue blocks to add further depth to the waves approaching the sand. Even the falcon head at the tip of the rowboat’s stern is an excellent little note in the grand symphony of this build. 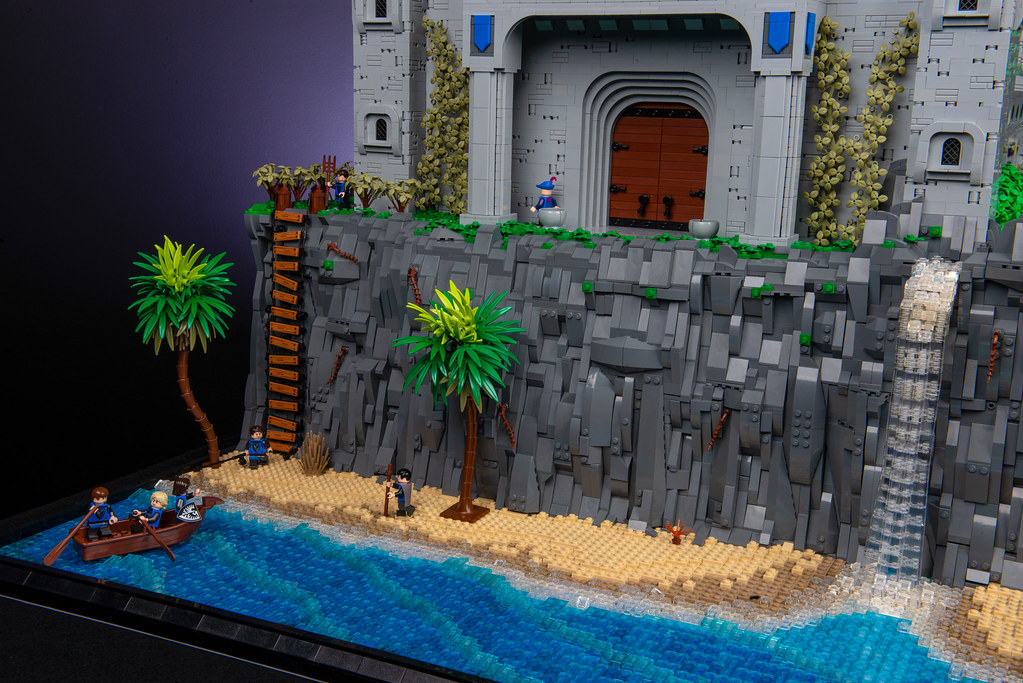