Legends are immortal and reach across time to transport us through their stories. Piotrek Przytuła tells one such story through LEGO–the Polish legend of King Sielaw. Long ago, the Masurian Lakes was ruled and guarded by Sielaw, King of Fish. At the behest of the Prussian gods, he protected the waters from greedy fishermen and settlers. Piotrek tells the story through a cross-section so we can see both above and below the waterline. The background is simple, which helps it set the scene and blend behind the impressive action. I do love how the shades of blue grow darker as the water gains depth. 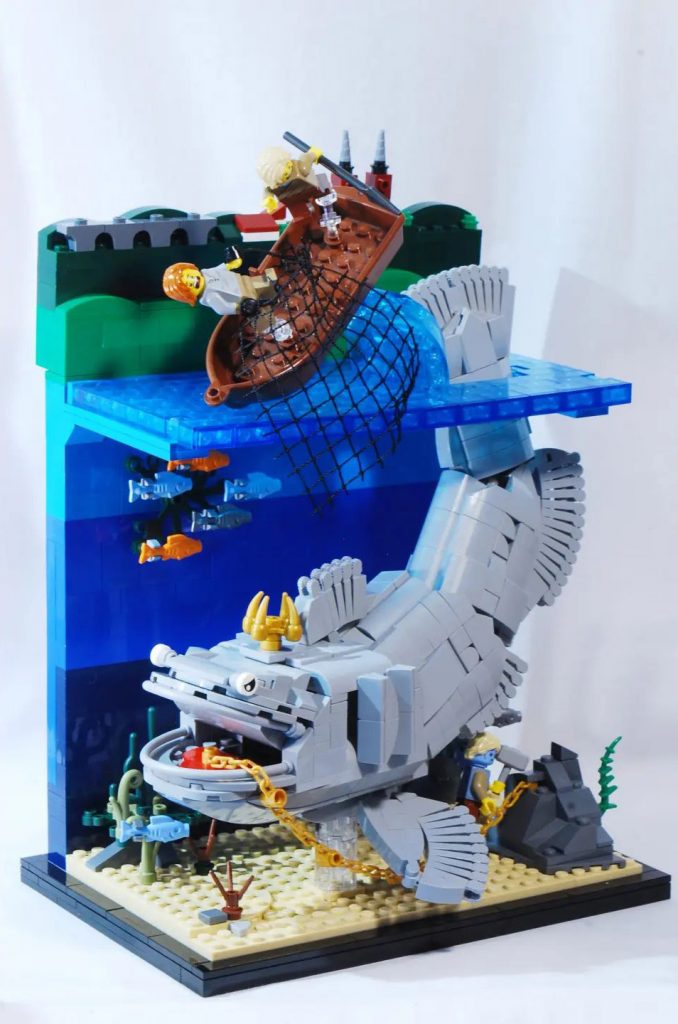 King Sielaw destroyed nets and capsized boats until there was no one on the lakes. He was so proficient at his job that the people began to starve. A fisherman’s wife presented an offering to the Prussian gods, and they revealed a way to capture the King of Fish. The fisherman forged an iron net and caught King Sielaw.  To spare his life, the King offered to fill the fisherman’s nets with fish. The fisherman agreed and would sell the fish in town. In the background, you can see the distant town of Mikołajki, with silver unicorn horn spires on the cathedral. 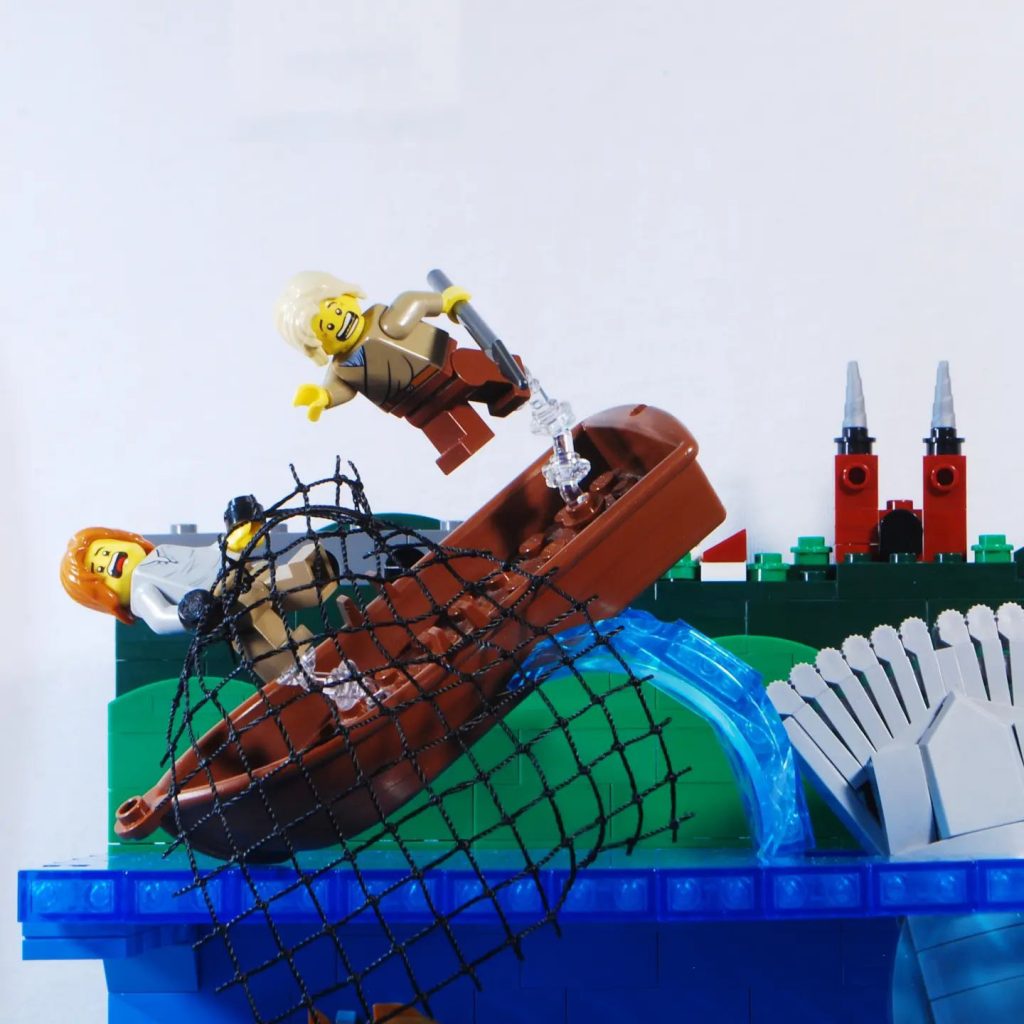 The other fishermen became curious about how the fisherman could bring in such bounties. He told them he had caught the King of Fish, and the other fishermen sought out King Sielaw. In exchange for his life, he offered them plentiful hauls, forever, from his kingdom. King Sielaw, the greatest and most clever of all water creatures, swims beneath the waters with his golden crown. Hinge plates are cleverly stacked to give his fins texture and curvature. His gills flare with slopes, and flex-tubing defines his wide mouth. Truly a build worthy of the King of Fish! 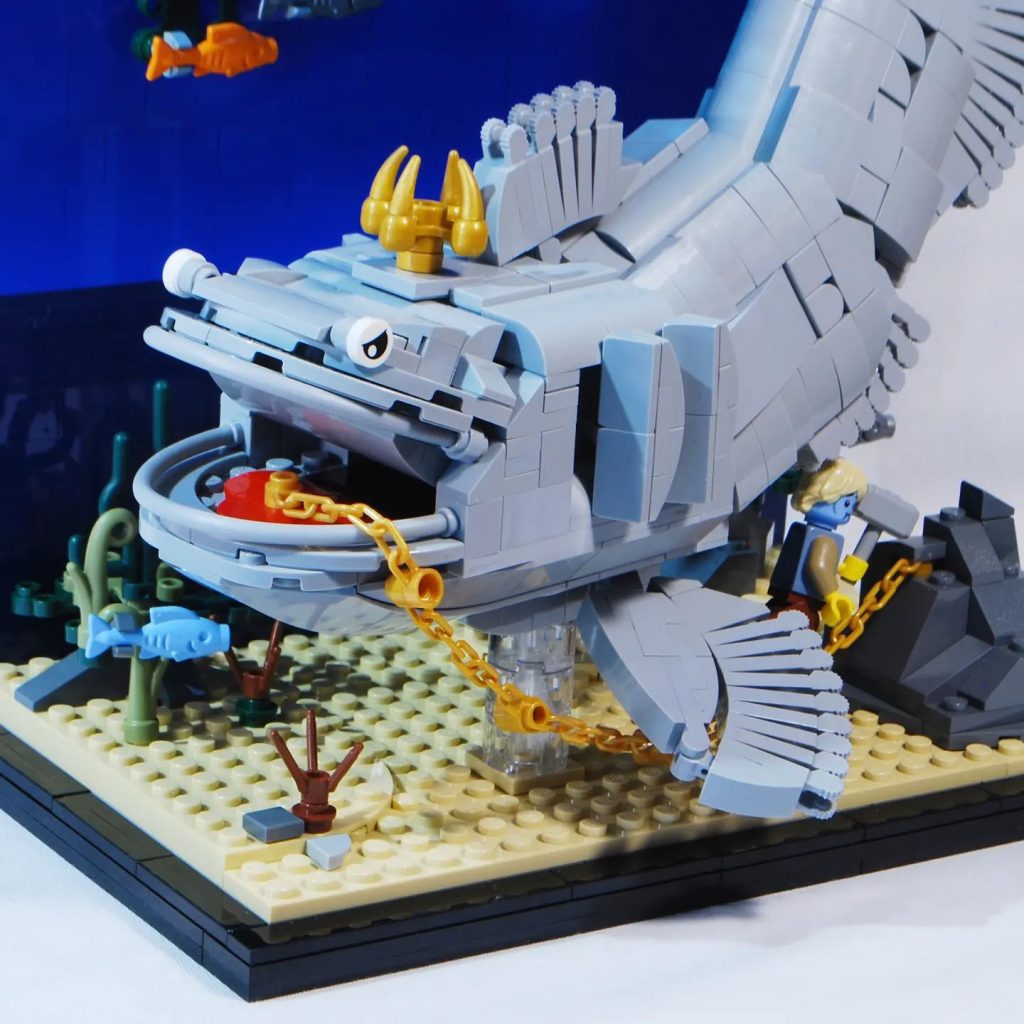 How does the story end, you ask? The fishermen took King Sielaw up on his offer. While they spared his life, they did not let him have his freedom. Instead, they chained him beneath a bridge and it is said the King of Fish is there to this day.