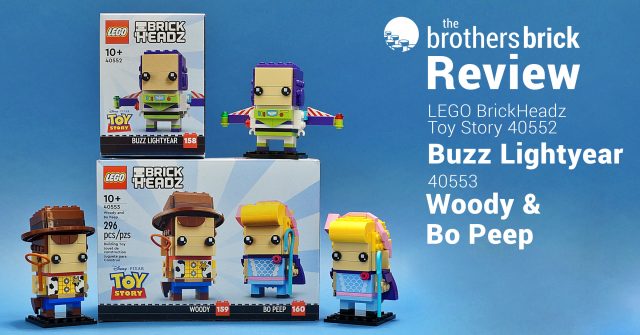 Buzz Lightyear comes packaged in a small square box typical of single BrickHeadz sets. Woody and Bo Peep come in a rectangular box to accommodate both sets. Each box features images of the completed included models and the Toy Story logo prominently displayed. 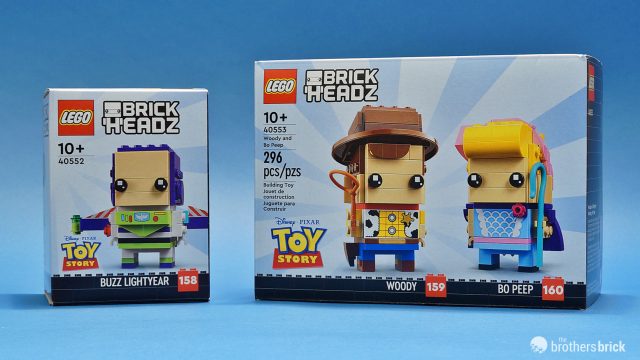 The back of the boxes demonstrates the figures’ ability to be removed from their display stand and cross-sells the corresponding Toy Story set. 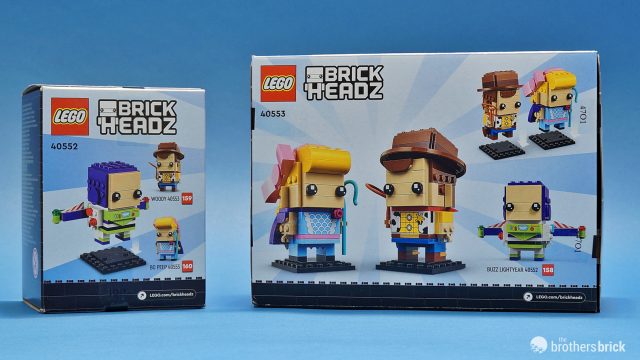 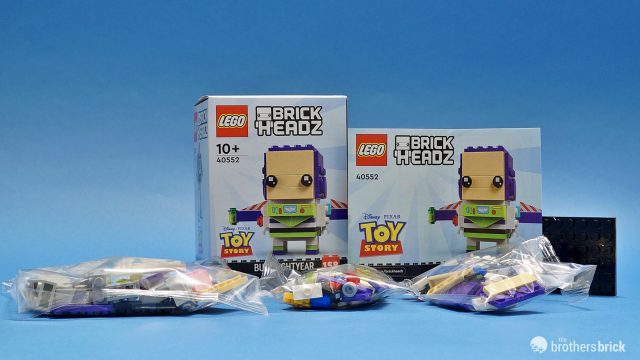 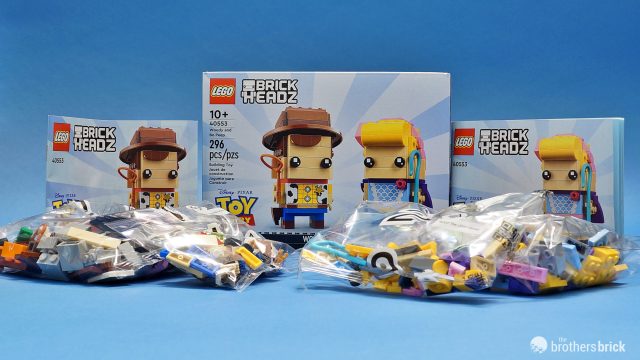 Neither set comes with decals, but there are several printed pieces to provide character specific details. The 2×4 tiles that serve as Woody and Bo Peep’s torsos have great printing, but they probably won’t provide many options to builders working on their own creations. The 1×4 tile featuring Buzz’s upper torso control panel might offer a little more variety as a part in certain sci-fi builds, but it’s still pretty unmistakably Buzz Lightyear. The wedges that make up Buzz’s wings, on the other hand, feature a red striped pattern that I think will prove useful in a variety of builds. 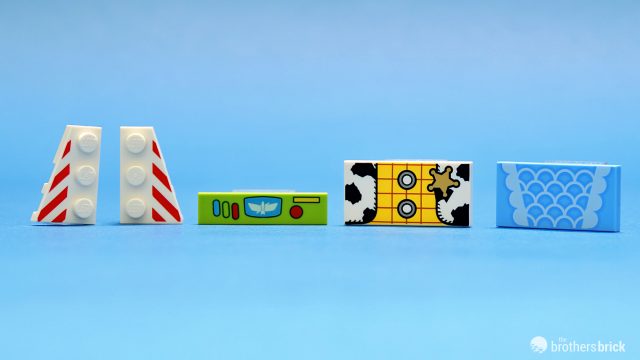 Additionally, the Woody and Bo Peep set features a 1×1 bracket in Dark Purple and a couple of 2×2 inverted brackets in Bright Light Blue. This isn’t the first time these pieces have been available, but they are rather rare colors. 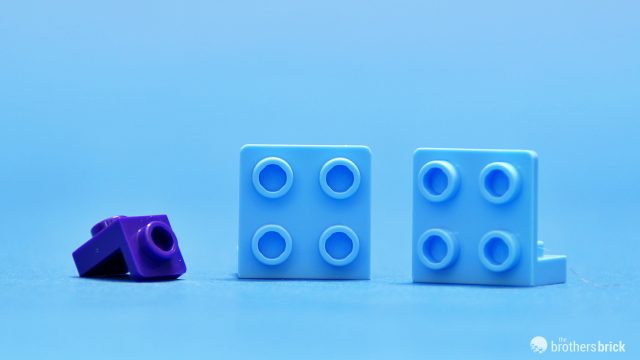 Perhaps the most noteworthy piece in either set is the 2×2 ribbed brick that comes in the Woody and Bo Peep set. This brick is as tall as two plates stacked together and features a ribbed pattern around the entire edge of the brick, with a technic axle hole in the center. Like the brackets above, this piece isn’t unique to this set, but it is a fairly new mold and this was my first time having one in hand. It ends up buried inside Woody’s hat, but it can easily be replaced with two 2×2 plates if you wanted to harness it for other builds while still keeping Woody on display. 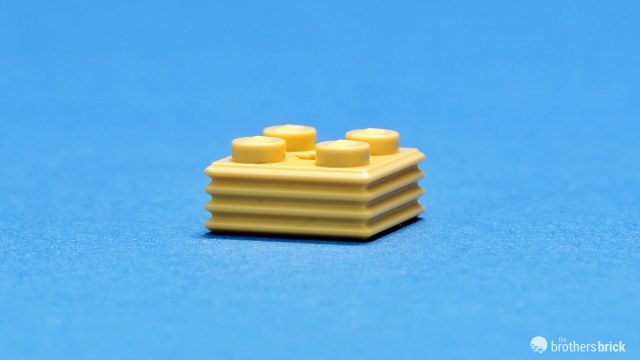 BrickHeadz are, by their nature, fairly formulaic affairs. Still, these two sets aren’t without their own unique charms. For instance, Buzz and Woody’s chests are filled with reminders of their canonical toy nature. Buzz has 4 blue 1×1 round bricks topped by silver 1×1 round plates inserted in an alternating up/down fashion, like batteries in his chest. Woody includes two white ice cream scoop pieces acting as cotton inside of his torso. 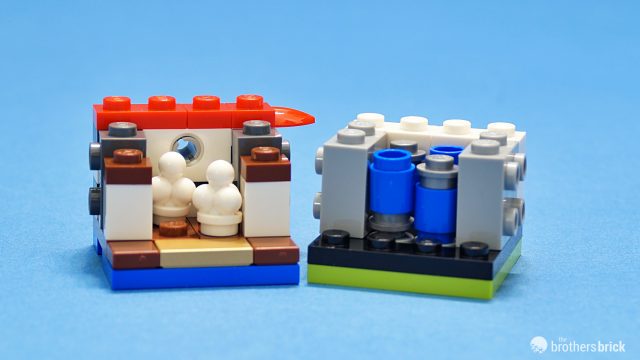 That said, at a certain point, the in-progress sets all look very similar. A 4×4 main body with a lot of Studs Not On Top construction to fill out details. 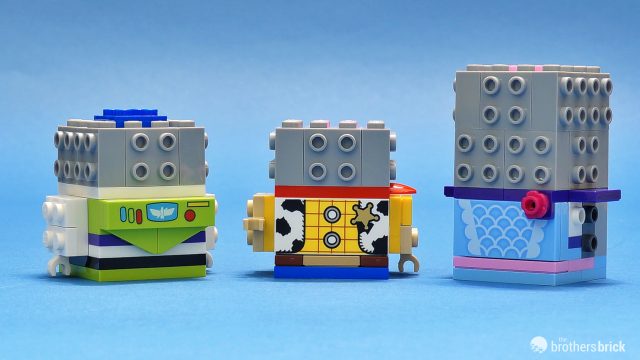 Buzz, Woody, and Bo Peep are instantly recognizable in their final forms.

Buzz’s final build includes his space suit wings extended. The backpack is well rendered, and his arms include details like his laser beam light. 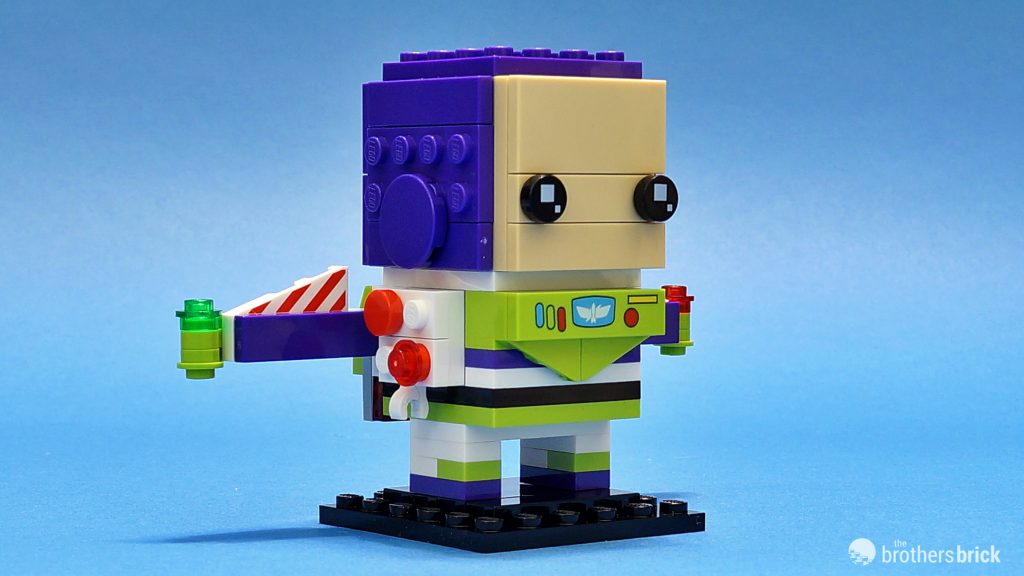 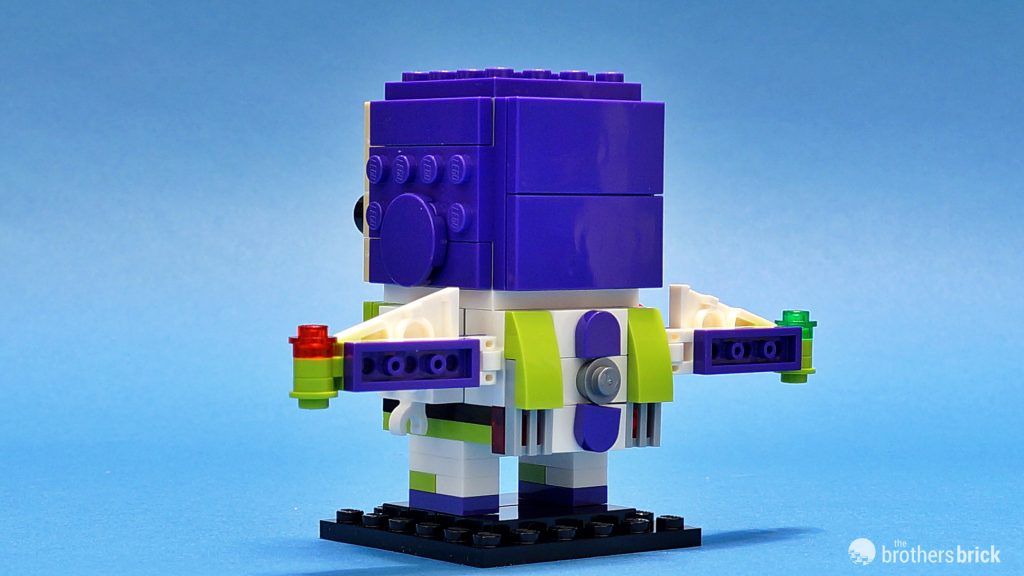 Woody and Bo Peep are both holding their trademark accessories, a lasso and a shepherd’s staff, respectively. Lots of care was taken to shape Bo Peep’s hair and the ribbon tied into a bow around it. Woody gets a lot of character thanks to his hat, which tilts back on a standard hinge brick. He also sports a life preserver on his back to represent his pull string. And where would a cowboy be without his trusty spurs? (Represented here by a pair of gold 1×1 plates with clips.) 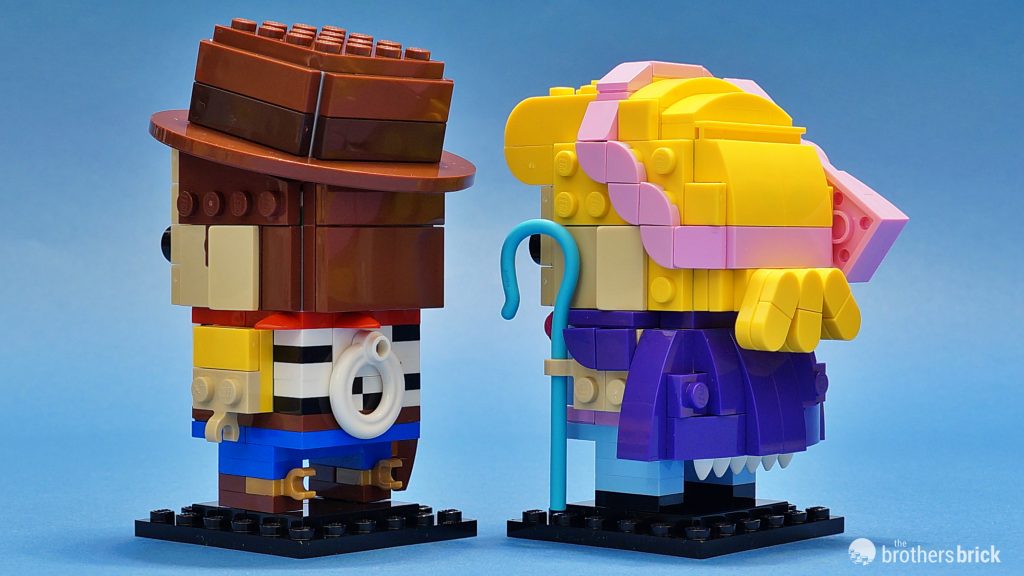 It’s hard to weigh in with a verdict on BrickHeadz as builds, at this point. If you’ve built one before, you pretty much know what you’re getting. These two sets definitely deliver on that promise. But these sets are also excellent representations of the characters they’re portraying, and the attention to detail and little easter eggs within them definitely feel like a celebration of the Toy Story franchise. If that speaks to you, you won’t want to miss these. Both sets will be available February 1st. 40552 Buzz Lightyear for US $9.99 | CAN $12.99 | UK £9.99 & 40553 Woody and Bo Peep for US $19.99 | CAN $24.99 | UK £17.99. 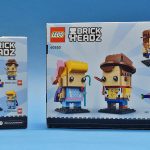 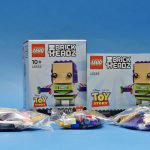 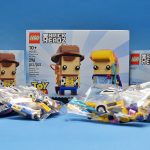 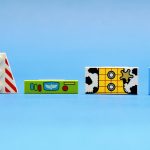 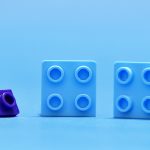 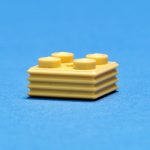 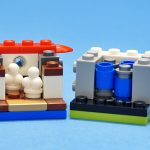 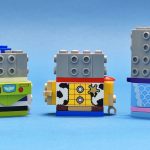 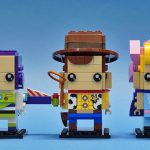 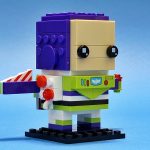 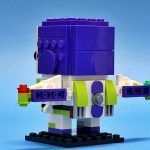 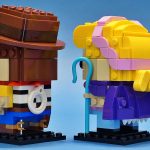