Denis Villeneuve’s Dune has quickly become a hit amongst fans and critics. The cinematography and soundtrack balance perfectly with the classic narrative to deliver a knock-out blockbuster that will last the ages. Much like Star Wars, Star Trek, and others, Dune features a plethora of cultures, planets, and religions. For me and other fans of LEGO, though, it’s the spacecraft and vehicles that really round it all out. The Ornithopters of Frank Herbert’s sci-fi classic have been a challenge for past projects but Denis Villeneuve’s design team produced a craft that will surely become iconic. When I saw this Ornithopter by TBB alumn Simon Liu, I had to know more. I talked with Simon about avoiding spoilers prior to opening night, his immediate need to build this beauty, and the challenges he faced with its final design.

Simon is apparently very against spoilers and as such, wasn’t fully prepared for just how amazing the film would be—let alone how enamored he would be with the design of the Ornithopters. As he puts it, he’s “just as guilty as many others that see something that makes them all googly eyes and want to build, and this was definitely one of those things.”

Despite being busy with work, he kept plugging at it until, after much trial and error, he had this beauty just a few weeks after the film’s debut. Shown with the wings folded and alternating landing gear deployment, the Ornithopter provided quite a few challenges. Aside from how big the ship needed to be, Simon tells me he struggled with the cockpit and its glass panels. He spent a full night digging through his LEGO bins trying to find the right canopies to properly enclose it until he found this configuration. I love the plates and slopes he used to emulate the panels, hiding some parts of the canopies but providing a great view of the passengers and pilot. 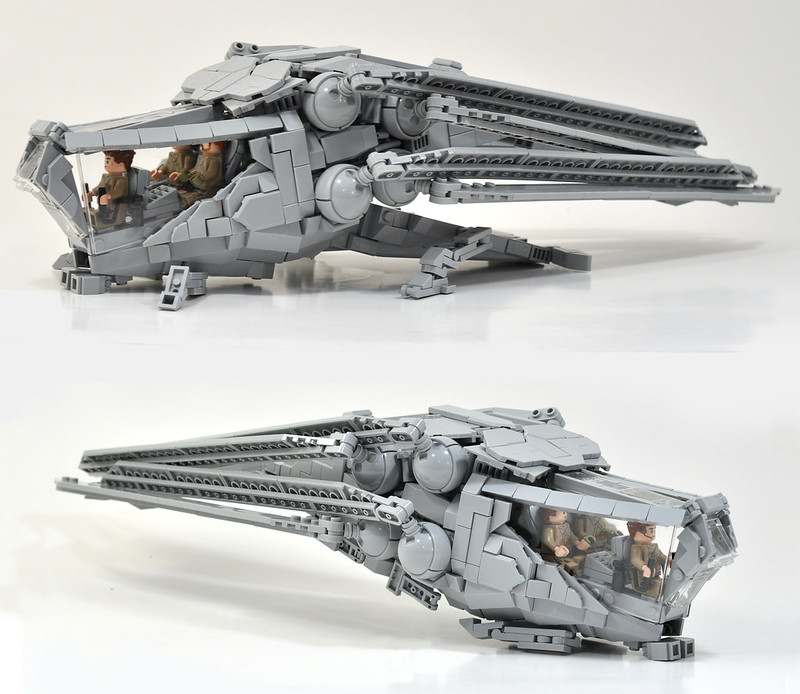 After finally getting the right structure for the front, Simon thought the rest would be smooth sailing. It was not. Using some of his SHIPtember building tricks, he was able to tackle the structure pretty easily. The shaping wasn’t overly complicated, according to him, but it was “by far the tiniest package” he’s used the techniques in. The true challenge was balancing the frame with the weight of the wings and tail. Given the small amount of ground contact and the length of all eight wing sections (plus where they attach in the frame), the whole thing was very back-heavy. Simon hid some LEGO magnets as weights in the front, as he has in past models, to offset the center of balance. Even that had to be supplemented with a stand, or the ramp shown above. 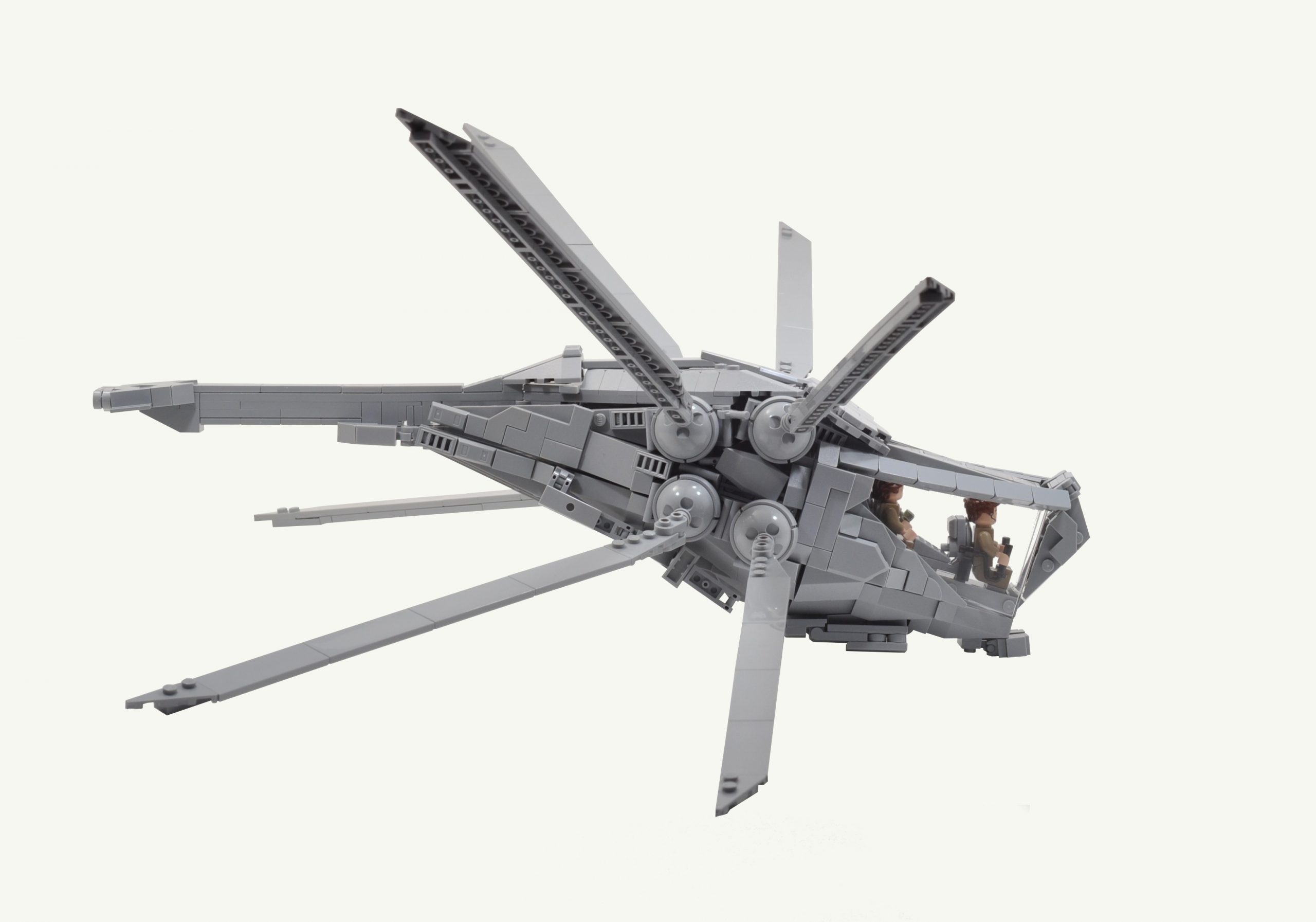 Balance wasn’t the only issue though. The ball turrets Simon used to attach the brick-built wings (another troublesome element) proved to be delicate connections. The detail in the wings and connection points are very similar to elements in the film design. Finicky as they were, there were bound to be some mishaps. He had a few moments while taking this shot with the wings extended when one would fall out, throwing the body off-balance and toppling it over. Thankfully, it survived. Texturing near the base of each of the eight wings leads into the katana-like blades that provide lift for the craft. The single stud connection point proved to be another challenge that probably takes this model into the “display purposes only” category. As Simon puts it though, “spinning is the new swoosh.” So, I guess it’s time to get a turntable for your builds if you don’t already have one.

1 comment on “Soaring over Arrakis with House Atreides: Dune’s Ornithopter in LEGO”