Febrovery might be far off, but that doesn’t mean we should deny ourselves rovers now. Builder Kilo Bricks brings the goods with the Goliathan Beta, an extensive mobile command center fit for exploring other worlds. This behemoth ten-wheel rover is a sight to behold. Its realistic design traversing over earthy terrain almost fools the eye into seeing NASA concept art. The keen eye of a LEGO fan will quickly be able to pick out the tells. Each angle of this beast is full of details worthy of praise, but the true show stopper is its interior. Ready to go for a ride and see what this monster has to offer? 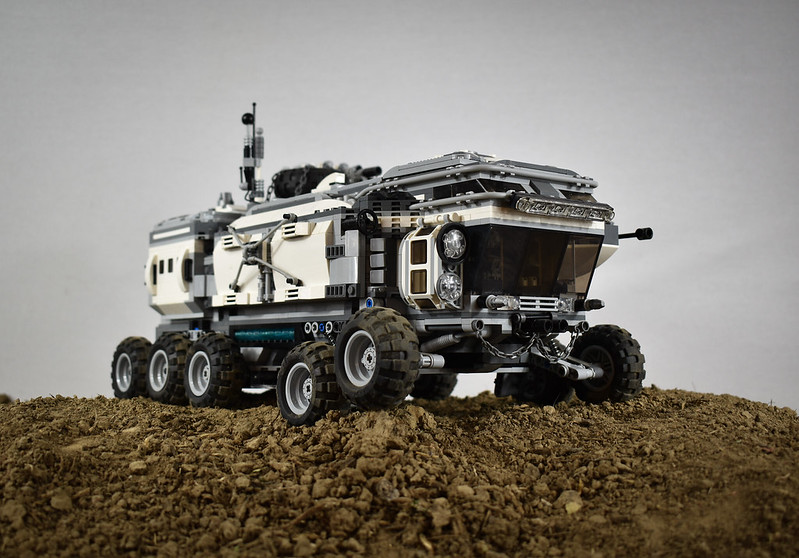 Just comparing the two front angles, we get drastically different profiles. While the right side of the rover is mostly panels and curves leading up to the entrance into the cabin, the left holds a ton of details. Gears and wheels hint at moving parts along the body. In fact, turning the top wheel will crank out the power units for the Goliathan. A gunner’s chair over storage compartments provides plenty of utility for the tasks at hand. In fact, that chair extends out to the side of the rover when necessary. 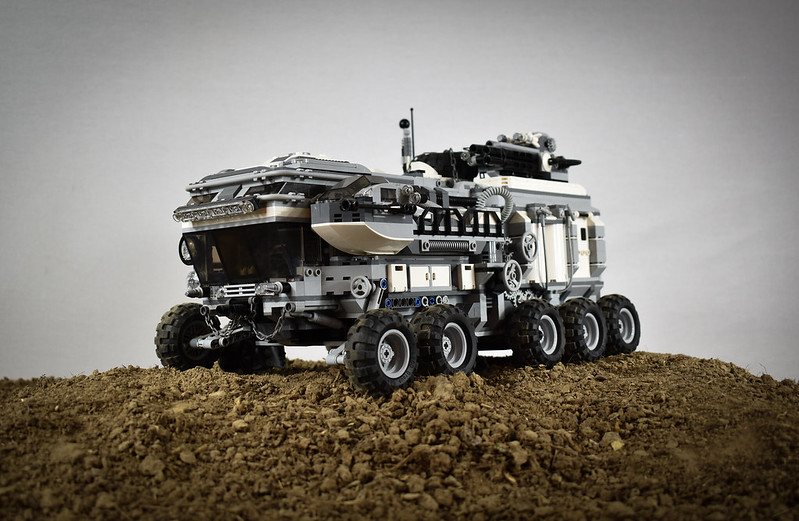 Finally, the back features a ramp that falls down from the body to reveal an alternate entrance. Pipes and the tank overhead add power to the turret above, which also doubles as a crane. 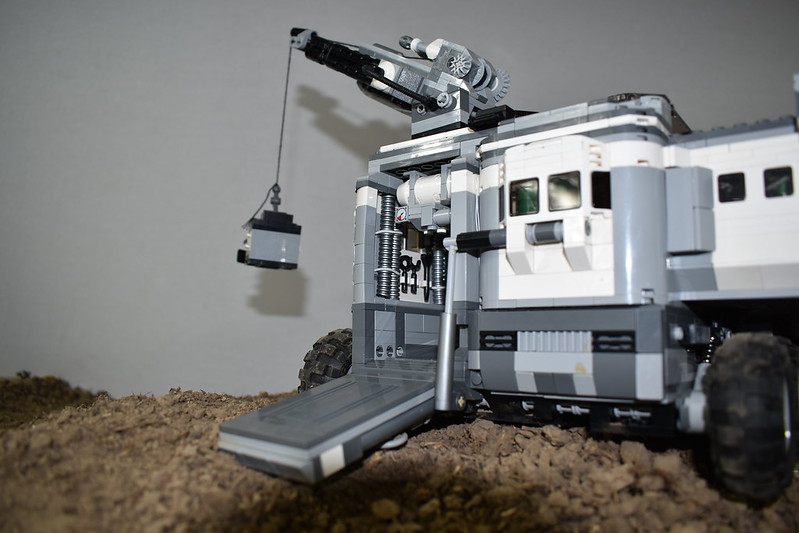 If I could slap the hood for effect, I would. Let’s open it up and see what this baby can hold. As you can see, the right section of the body falls down while the roof opens over multiple sections. Inside, various sections swing out to complete the structure of the base. 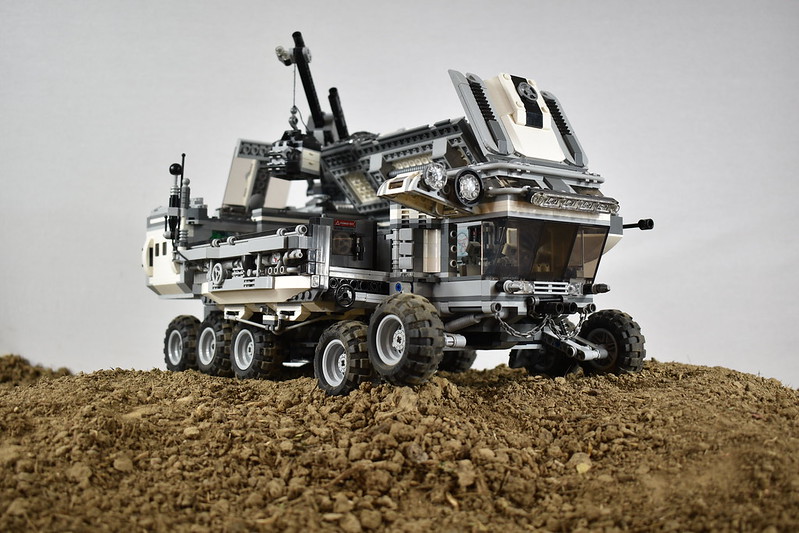 Okay, now you know how it opens up. Inside, we see the wealth of equipment that the crew has at its disposal. A lowered command deck with weapons and plenty of storage features a holographic table displaying the rover’s surroundings. The grey 1×1 plate and translucent grey cheese slope are used to represent the Goliathan amongst the Star Wars-like translucent blue display. The blue chamber is most likely a medical station, though various specialized tools in the area nearby suggest that it could be used for analysis. 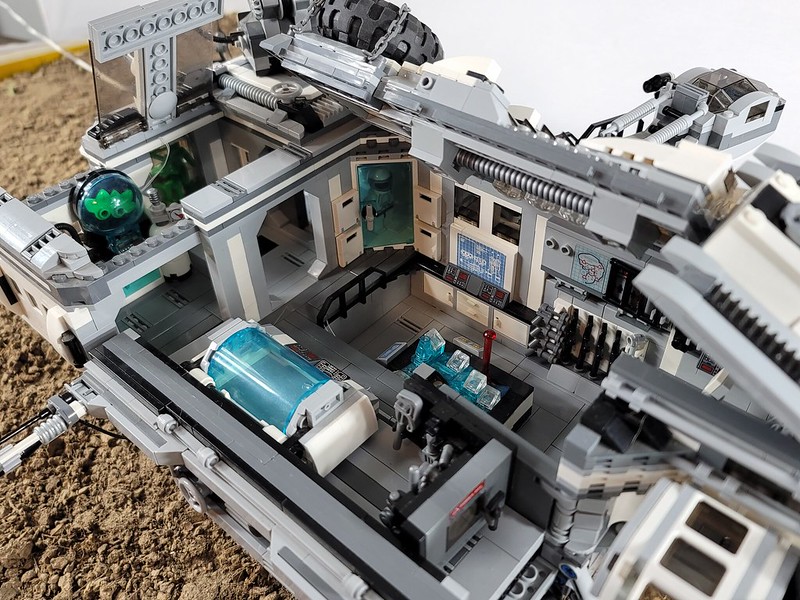 The back corner of the rover slides out to reveal a small section full of plants. More analysis equipment and a tank of some sort of gas sits in the extended section, providing further areas for the crew to conduct experiments. The room next door leads to the back entrance, as well as a smaller observation room on the side of the Goliathan. 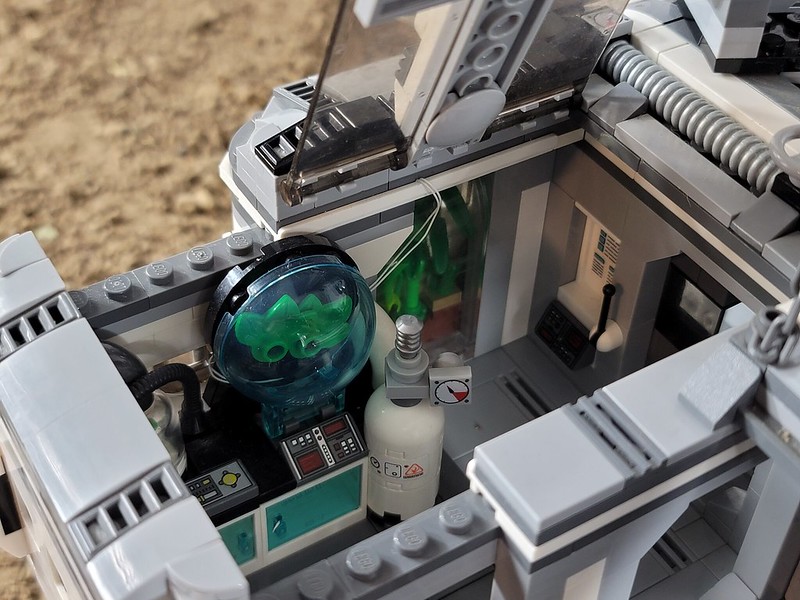 The driver’s seat is worth a look too. Multiple displays and readouts provide plenty of data for the crew as they traverse the alien landscape. Its difficult to cover every aspect of a build like this, but each corner of this eye-catching rover is worth a closer examination. It’s pretty remarkable how much detail Kilo Bricks was able to fit into the Goliathan Beta, and I commend him for the amount of planning that this model surely required. Fans with keen eyes might see little white wires, like the ones above the driver’s seat here, throughout the build. A delightful feature of the Goliathan Beta is its ability to light up. This build certainly lit up my day, and I can’t wait to see what else Kilo Bricks has to bring us in the future. 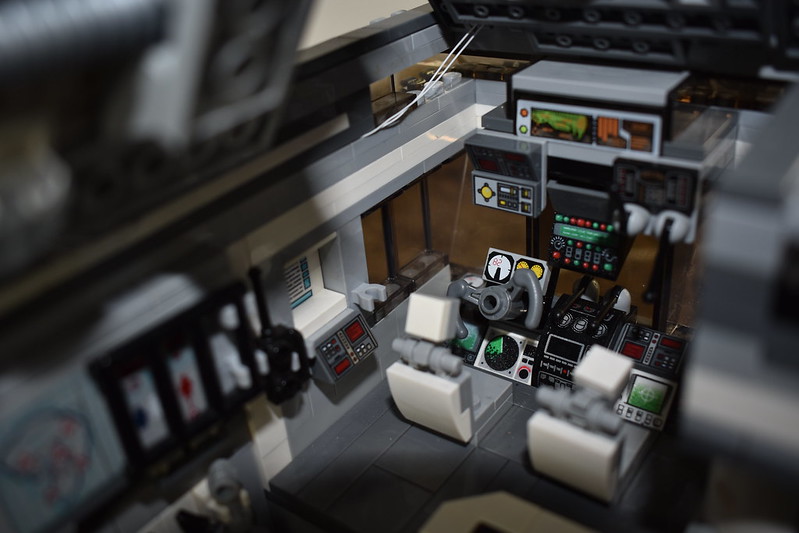