I think I was twelve or thirteen when the Digimon Movie came to America. The power of Omnimon’s line as he saves the world from Diaboromon held so much power to me back then. My younger brothers and I were obsessed, watching it countless times during the summers until our parents came home and forced us outside. I honestly still have the WarGreymon poseable figure that I cherished back then. So seeing builder Kekenoji’s brilliant model of the iconic Omnimon, I just had to write about it. After recently watching Digimon Tri, the newest continuation of the Digi-Destined’s story, this character was fresh in my mind, and Kekenoji did a marvelous job modeling this awesome warrior. 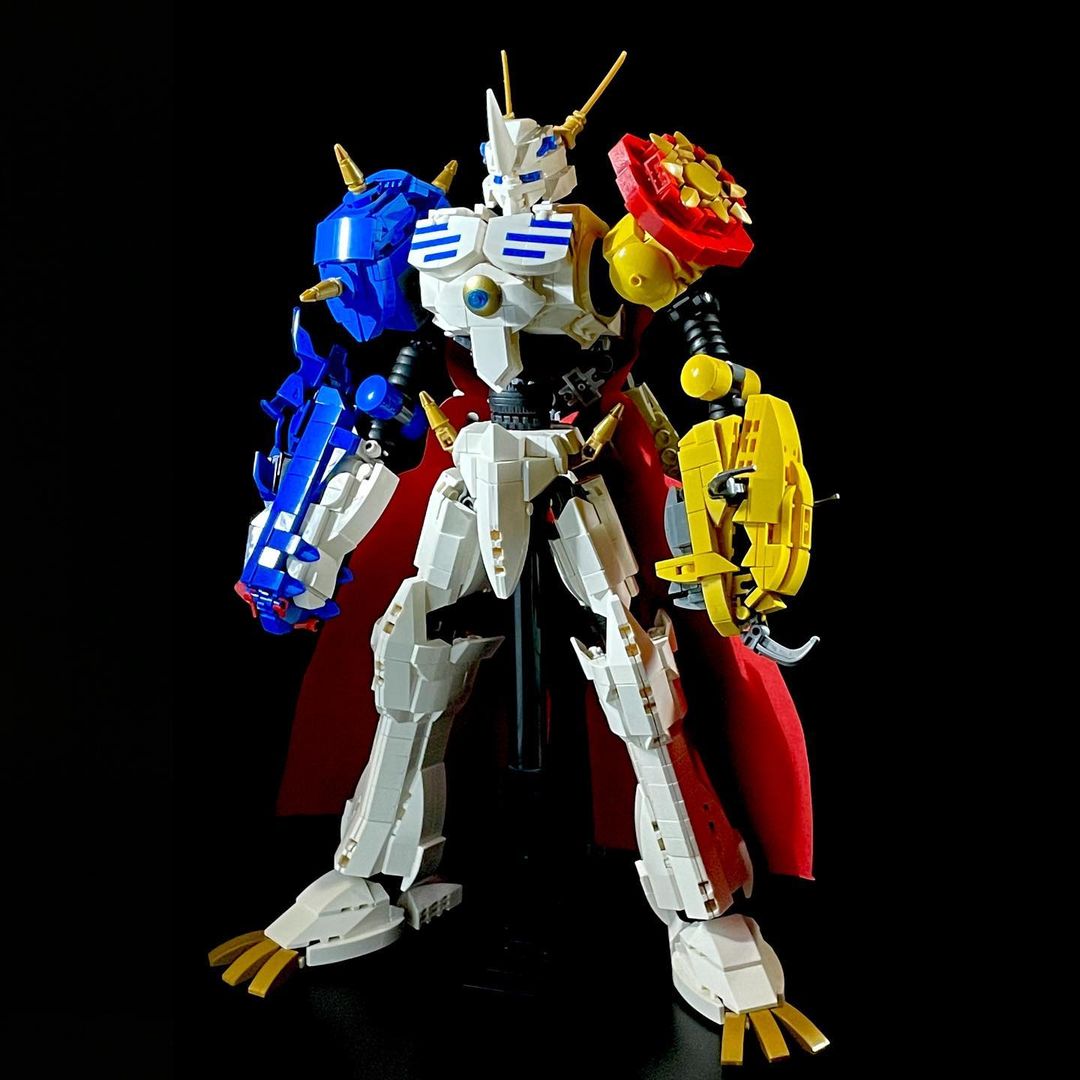 The main body is nicely stylized, built with various techniques and upside-down bricks to give the effect of a suit of armor. The chest uses stacked 1×2 plates to achieve the blue stripes. Tires provide body to the core, as well as strength through friction, something Kekenoji makes use of again in the arms and the joints of the legs. The capes that the builder used have a pretty goofy source, coming from a few Zerg’s from the Toy Story line that Kekenoji had.

Taking a look at the right arm, the stand-out detail is the heavy use of blue. For those not in the know, Omnimon is a fusion of MetalGarurumon and WarGreymon that possesses the “Omega inForce.” Spoilers, I guess, but he basically saves the day for the original Digi-Destined kids when a virus-type baddy, Diaboromon, is about to nuke the world. Anyway, this right arm is modeled off of MetalGarurumon’s design, ending in his wolf-like head. Motorcycle bodies are cleverly used as ears and provide a smooth transition into the slopes used in the face and mouth. The jaw opens, revealing a double clip which is used to connect the Garuru Canon with a ball joint. The shaping and mobility of the shoulder plate allow for a lot of movement while tires in the thin frame of the arm help the structure bear weight. 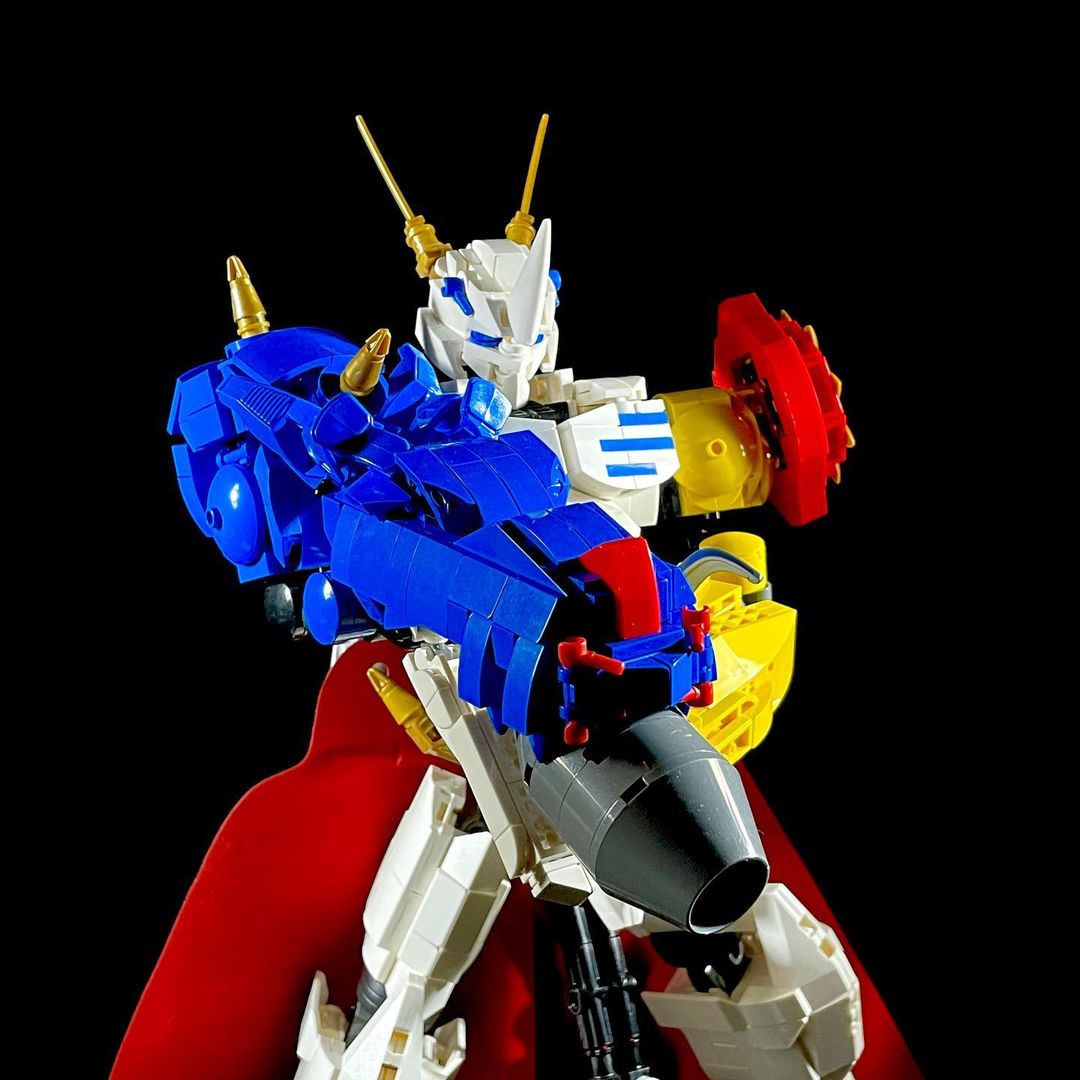 The seal on the left shoulder uses clips and sideways building to emulate the shape of the Crest of Courage of the Brave Shield Omega. Again, tires give texture and body to the arm as well as strength. That’s an essential detail with an arm that fits a sword attachment into it. This arm is modeled off of WarGreymon’s helmet, complete with horns. The diamond shape eye is built with cheese slopes into the structure of the head…hand? Sure. This mouth also opens, revealing the bottom of a plate in the jaw to which the Grey Sword can attach. Inverted, modified plates give texture to the blade, emulating the writing on the anime version which translates to “All Delete.” 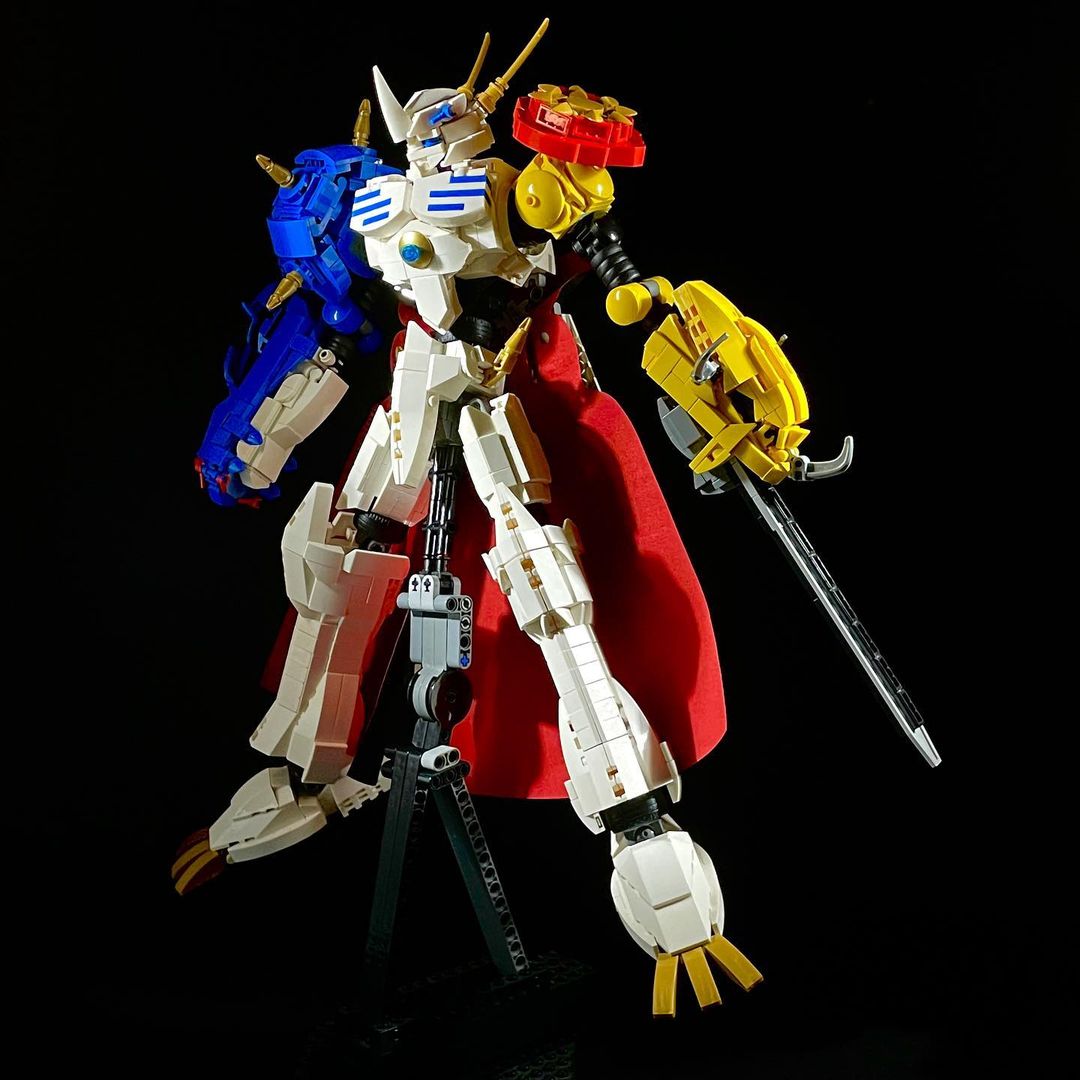 Hands down one of my favorite uses of Mech building techniques. It would be a disservice to not admire the tight building techniques that Kekenoji used in the head. It’s a dead-ringer for Omnimon. Builders like Kekenoji have an eye for pop culture and this isn’t his first foray into Digimon territory. I have to give props again for great form and clever parts usage.