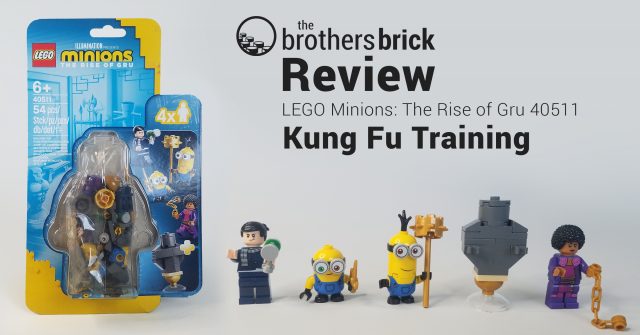 The Box and Contents

Usually, sets that serve as accessories to other LEGO sets comes in either a small box or a plastic bag, but a handful of sets come in minifigure-shaped packages like this, such as Ninjago’s 40374 Golden Zane Accessory Set. Kung Fu Training came in an action figure-style package, with all the parts contained within the transparent plastic minifigure casing. The front of the package’s background has an illustration of what could be the actual Kung Fu training room from the movie, with the included minifigures being shown fully built on the right side of the case. The bottom of the package is bordered by an assortment of yellow bricks, a definite call out to the yellow Minions this theme is named after. 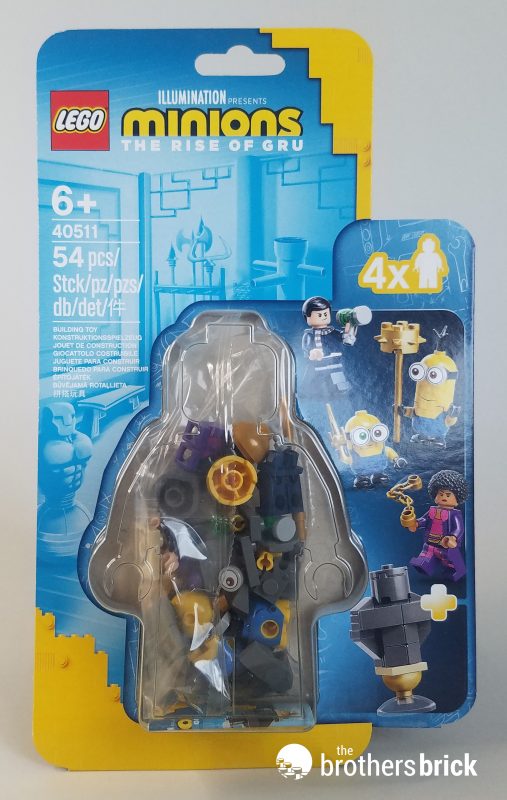 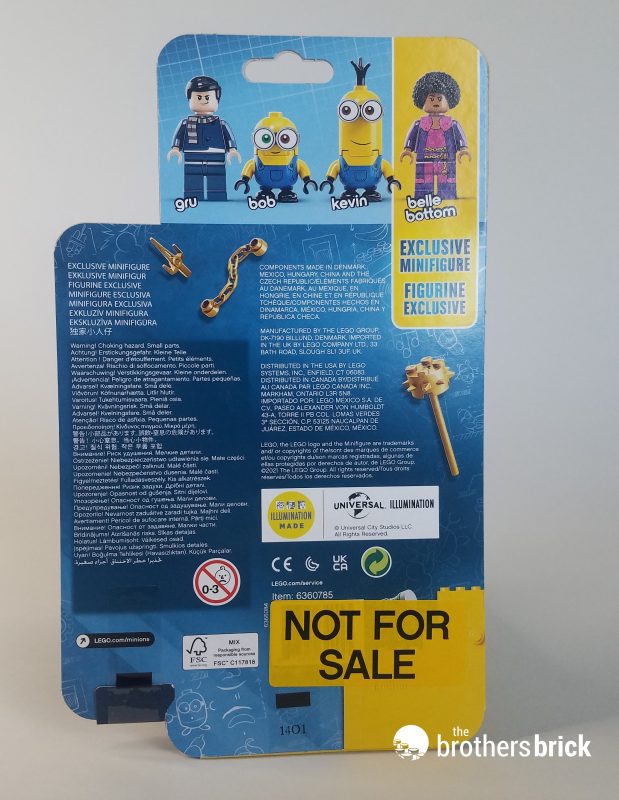 With only 54 pieces, this could easily rank as the smallest set in the Minions theme. The pieces come in a plastic bag along with a single front-and-back page of instructions. 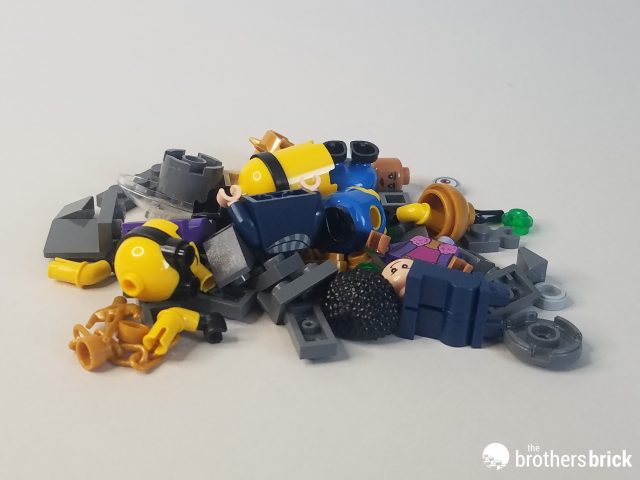 The entire set only took me a few minutes to build since it was mainly minifigures. I’m definitely not complaining there, however, especially since this set comes with an exclusive Belle Bottom figure.

Belle is supposedly the central villain in Minions 2, but with everyone in the movie being a villain you can’t be too sure about that. Her minifigure is fantastic, with purple and pink giving this girl some serious flair. Her torso has a gold belt print that continues onto her leg pieces, adding to the detail that makes her figure that much cooler. That’s not all: her figure comes with a great afro and a gold chain as a weapon accessory.

I did notice that the printed facial expression on her head is nearly identical to the facial expression printed on the back. There’s just a slight difference in the eyebrows, making me feel like she didn’t need a reversible head at all. Additionally, the reason why you’re not seeing images of the back of the head in this review is because the head is stuck on the figure’s neck, and the afro hairpiece is stuck on the head. I hope these tightly-fitting pieces aren’t the case with every Belle Bottom minifigure! 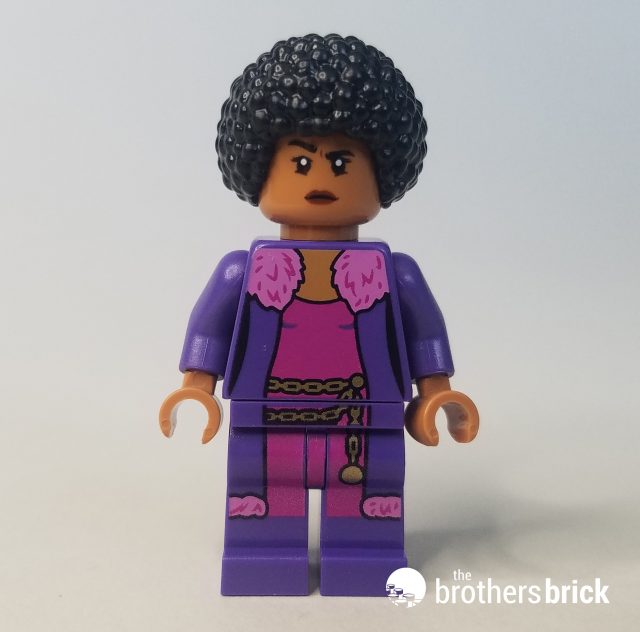 Building Gru, the maniacal, accented villain seen here in his younger days, was just as simple. He comes with a hairpiece designed to give him that little kid look with the bit of hair sticking up in the back, that was originally Emmet’s from The LEGO Movie. It’s been in black a handful of times previously, though. Gru has his trademark dull, striped scarf as well. His weapon of choice is some sort of hammer, though knowing Gru from his previous films it probably shoots burps or something.

Moving on to the Minions: these guys are naturally the best part of every Minions LEGO set. I love their unique pieces and the potential there is to use them in other builds. In this set, Bob is the short one and Kevin is the tall one. Both are featured in other Minions sets, so don’t go in expecting to be able to create a dozen individual Minions right out of the box. But with a little imagination and some eye-piece swapping, you could easily make your own army of Minions ready to steal the Statue of Liberty (a small one from Las Vegas) or the Eiffel Tower (also Vegas). 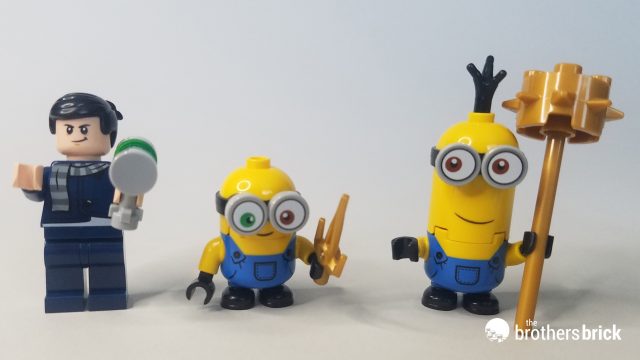 The final part of the Kung Fu Training set is the battle dummy. It’s a super quick build of just 22 pieces with no other purpose than to get whacked by the set’s minifigures. You can see in this image how tall it is compared to the Belle Bottom minifigure. The torso base fits nicely onto the gold-colored bowl, which surprised me since I didn’t know that those pieces fit together. Though the instructions didn’t specify anything further than the dummy, I’d imagine you could customize it into a more formidable opponent. Just add a couple of swords and you’ll have Minions running away from it instead of charging towards it. 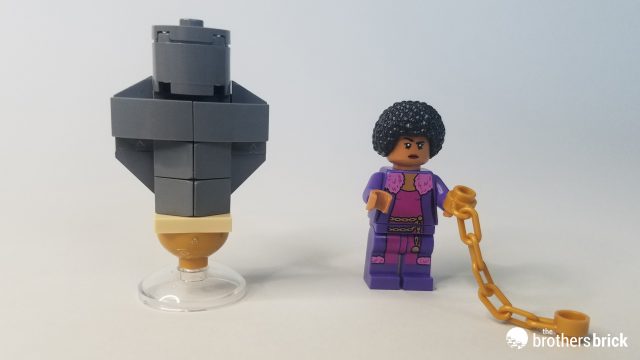 Kung Fu Training only took a few minutes to put together, and the result is four minifigures and a battle dummy (or spare parts for another build). Will Gru and his Minions manage to get enough training in to defeat Belle Bottom? It’s up to you! 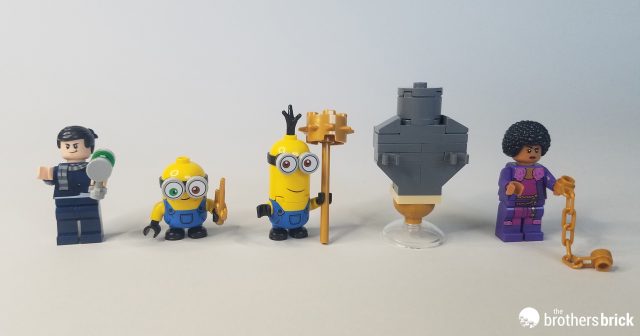 As an accessory set, Kung Fu Training will likely be a cheap way to assemble your Minions while still collecting young Gru and the exclusive Belle Bottom. Gru only comes in one other LEGO Minions set, so this is your chance to pick him up in an inexpensive set if you didn’t already have one.

I would buy this set, but I wouldn’t say it’s a “must-have” for everyone. However, if you’re into collecting minifigures or you really like the Minions theme, then this was created with you in mind.