Here in the U.S. and around the world, the end of the year brings a number of holidays and festivities, and under normal circumstances, a trip to the ballet to see The Nutcracker is a major holiday tradition. Well, in the midst of a global pandemic you will be able to bring a little bit of the Nutcracker home for the holidays. LEGO’s holiday BrickHeadz this year is 40425 Nutcracker. Although LEGO was able to send us an early review copy, we still don’t have the price, but we presume it will be $9.99 like other standalone BrickHeadz. It will be available starting October 1 and has 180 pieces. 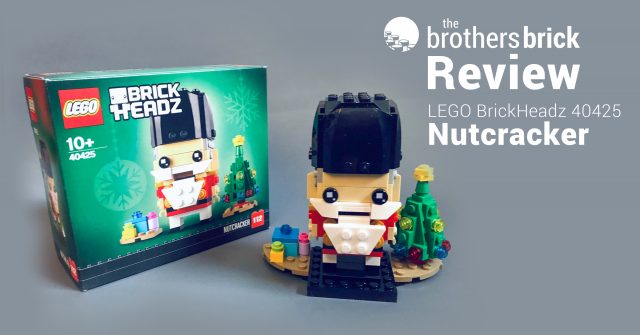 The Nutcracker is number 112 in the BrickHeadz series and comes with 3 unnumbered bags and an instruction booklet. Like all of the other sets in the holiday theme, the set includes a base model with a few smaller builds to accompany the figure; in this case, a decorated tree and a small group of presents. 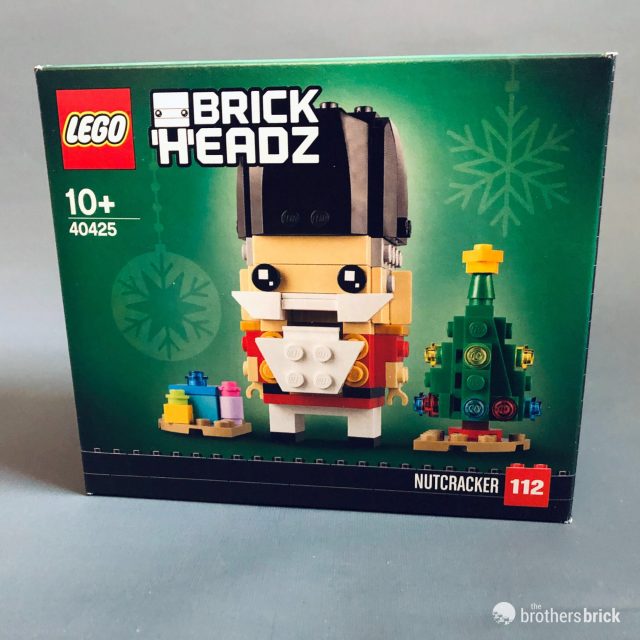 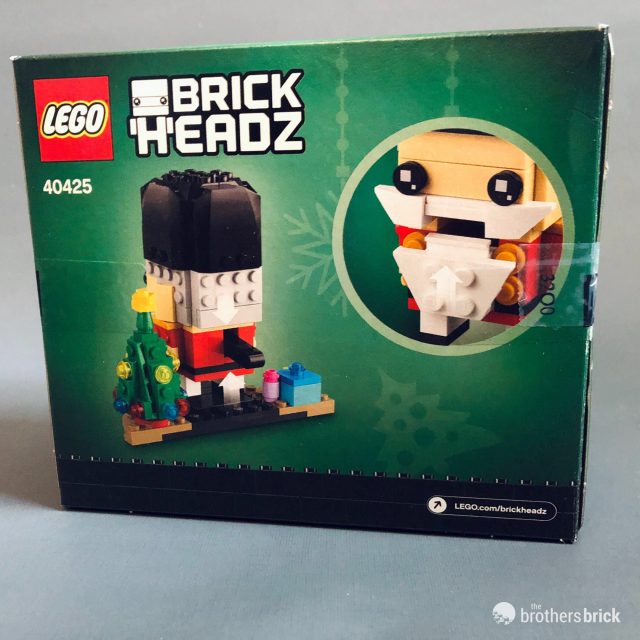 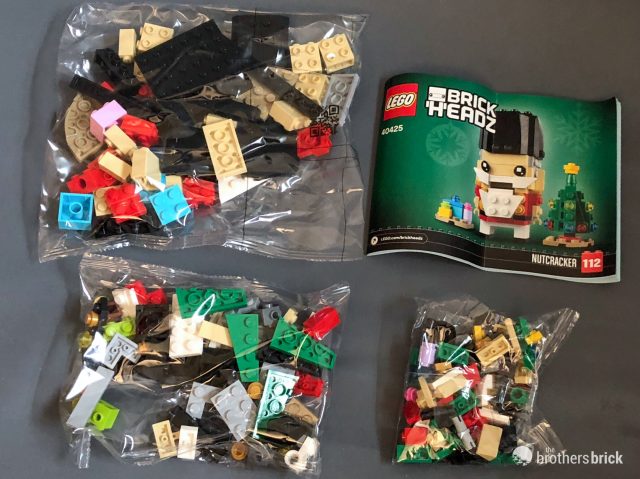 As soon as you start the build, the unique play feature of this model is obvious: the moving mouth attached to a Tecnic lift arm to simulate the nutcracker function (I did not test this, but I strongly suspect that this model will not crack nuts). 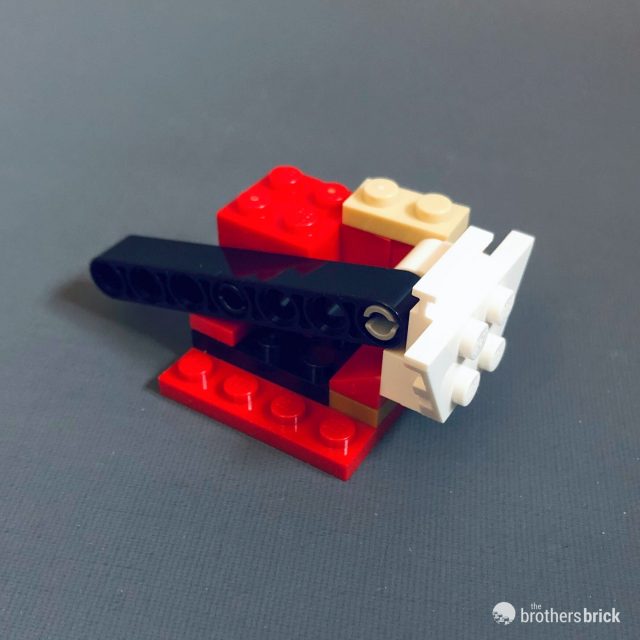 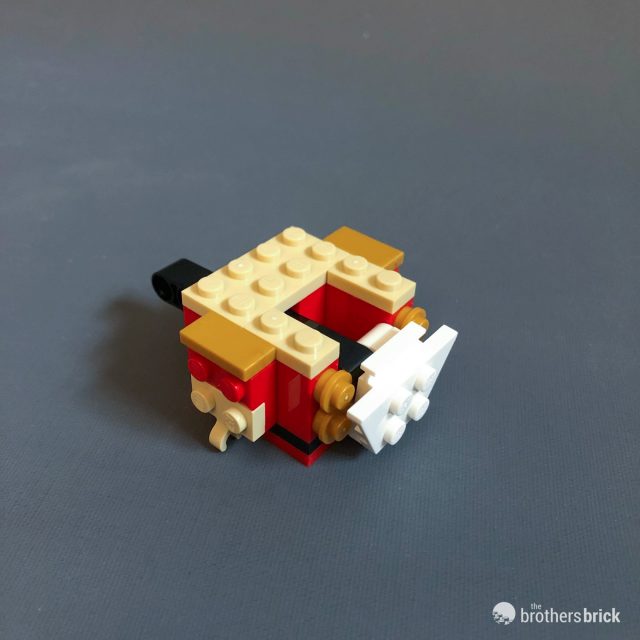 The rest of the body is fairly standard, with the exception of the arms, made with a modified plate with side facing studs (the set includes 6 of these parts, used again later in the hat) and shiny gold epaulets. 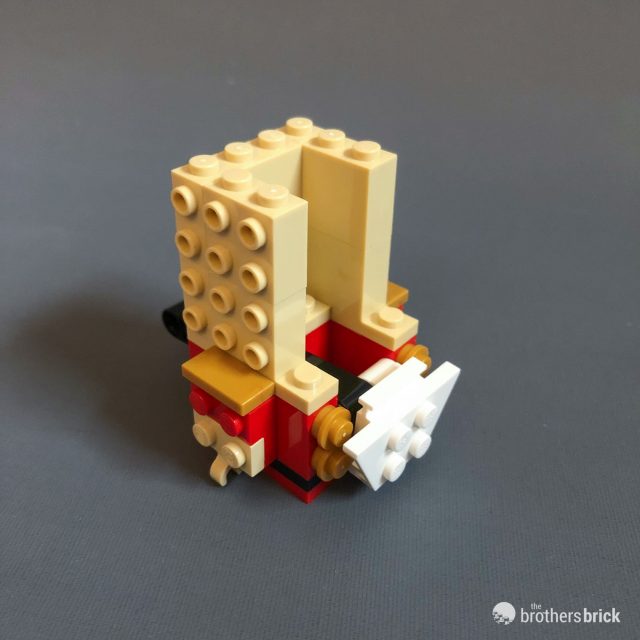 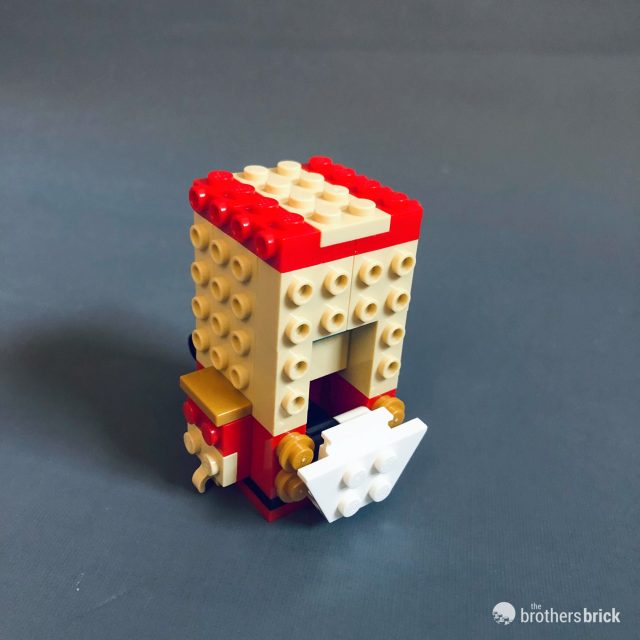 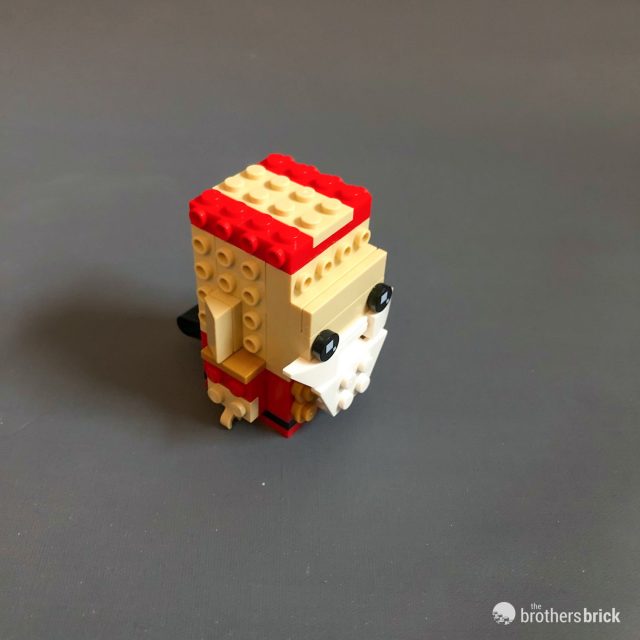 Moving on to the head, the front section is hollow, to allow for the movement of the jaw assembly, so the eyes and mustache are attached over this hole. Next, the signature black hat completes the look of this toy soldier turned valiant defender of the young girl Claire, against an army of rats lead by a 7-headed rat king. 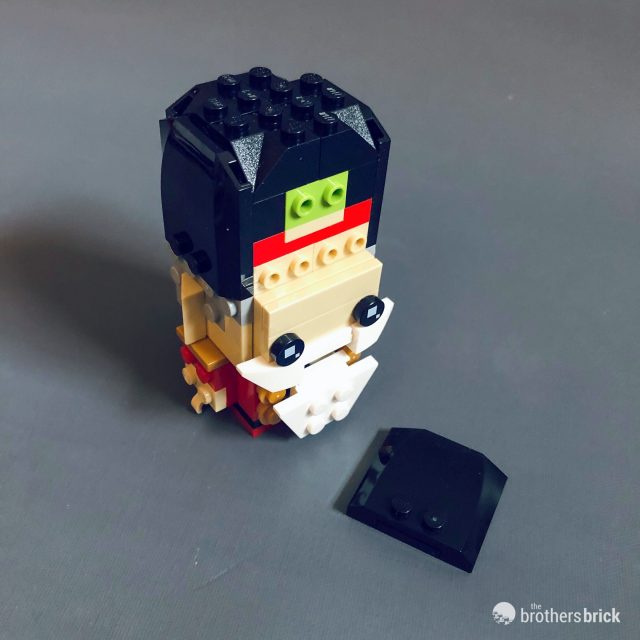 You might notice something missing from the finished model that puts this soldier at a distinct disadvantage. A sword! Luckily, a cutlass from any pirate set will do the job very nicely. 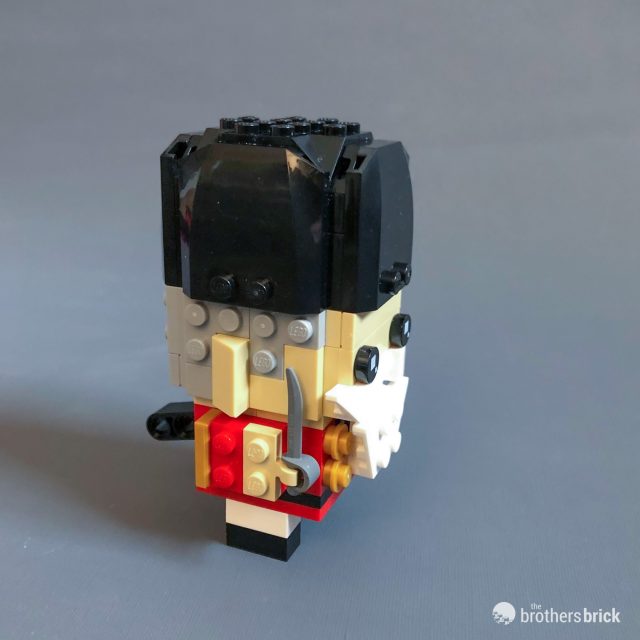 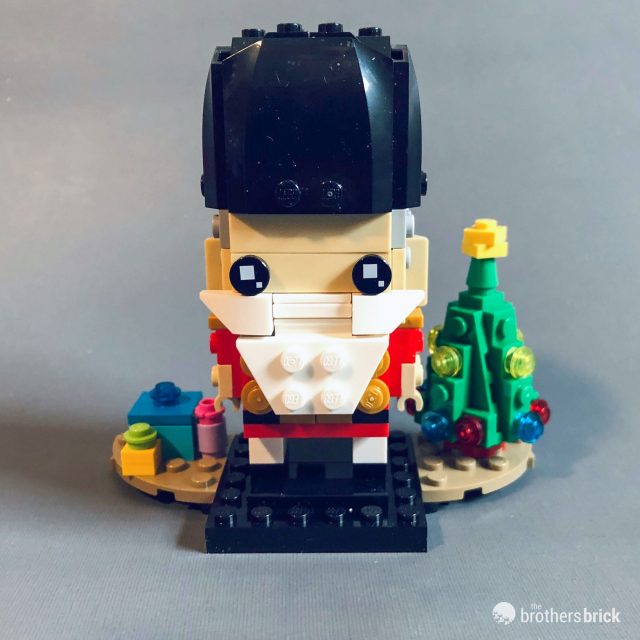 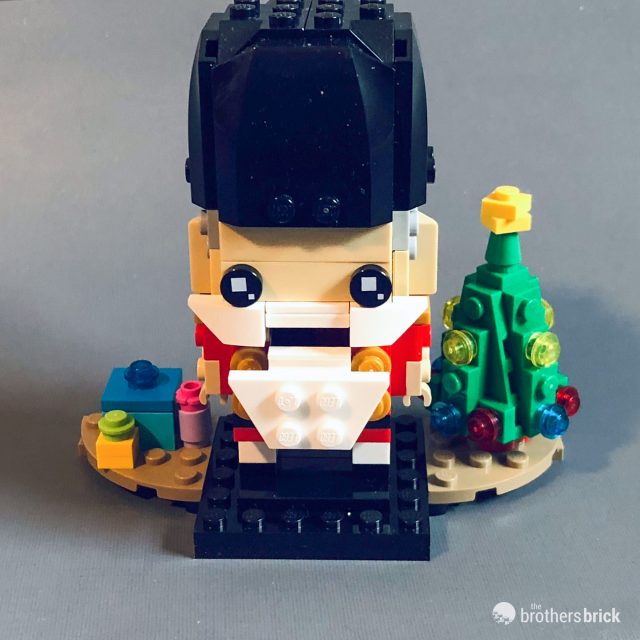 While I appreciate that LEGO is branching out from traditional holiday subjects like Santa, elves, and reindeer, This model falls just a bit short for me, and at first glance could easily be confused for a generic Russian Czar. I think there are a few simple details, like the sword, and actual boots, instead of the shorter, standard shoes, and even some sort of brick-built rat, or a smaller toy soldier that would have nailed the Nutctacker look even more. 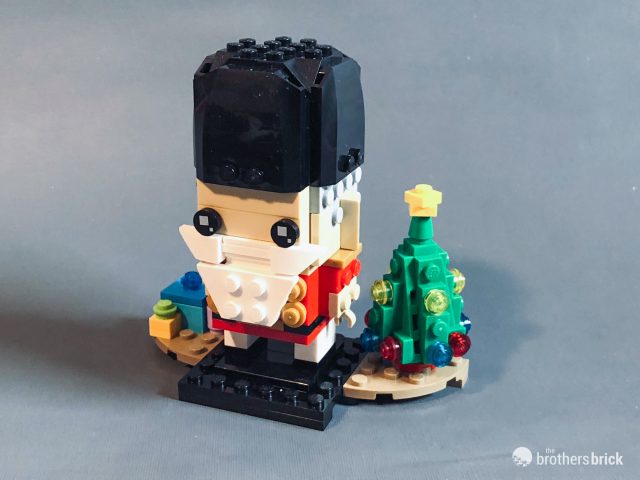 For the price, it is hard to beat BrickHeadz as parts packs, and this set is no exception. The 5 plate high sideways facing stud bricks in tan, and red, as well as the modified plates I mentioned above, make the set worth picking up, and for people who collect nutcrackers, I think this set would make a fine addition. The other parts of the build are also nice, with the decorated tree using a similar technique as the Gingerbread house we reviewed last year. 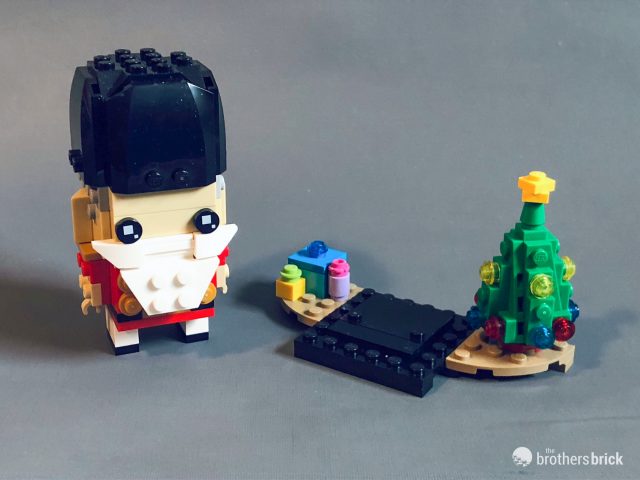