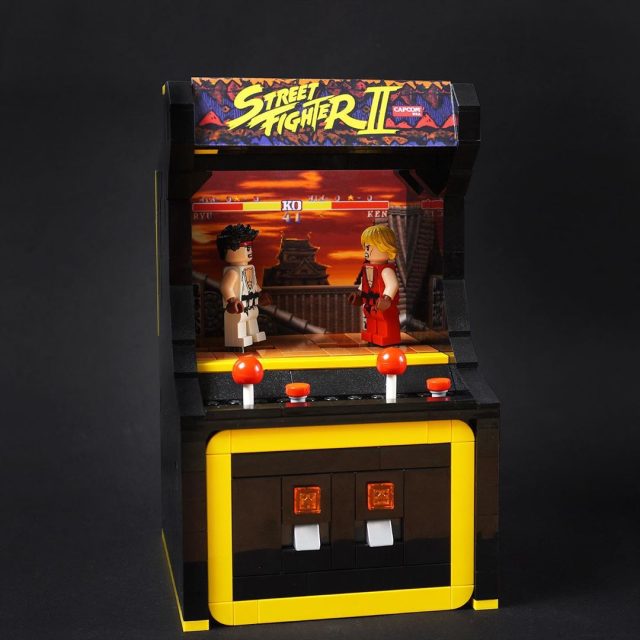 Setting up is as simple as plugging in a video game console, except this build doesn’t need electricity. You start by popping off the cabinet’s lid. Drop in the card picturing the memorable scene of Suzaku Castle (Ryu’s stage). The custom Ryu and Ken minifigures stand in the screen, wielding their power blasts, an adaptation of their respective Hadoken special moves. Each player has a joystick and a multi-purpose button. When pressed repeatedly, the minifigures either move in idle position or they’ll perform a 360-degree spin kick when they slide forward in the slot. Creating a variety of attacks for the gameplay is the icing on the cake for this build because Street Fighter II gained notoriety for its combo moves.

At first glance, you’re probably wondering why the contrasting skin tone between the hands of Ryu and Ken. We’re pretty sure the purpose is to mirror the brown hand wraps from the video game. The mosaic of Ryu on the back of the cabinet was teased at the beginning of this year. The branding all over this creation is complete from front to back. The coin deposit adds extra nostalgia. If we could just see what’s behind the coin deposit door so we could get a peek at the internal mechanics as if we were breaking in to get infinite plays.