With over two-hundred articles into this gig, I still approach most with about this much enthusiasm. I’m shorter and not as buff but just as bald and just as shirtless. It makes everyone here at Brothers Brick Headquarters a bit uncomfortable but I keep telling them I can’t help it if I’m follically challenged. Anyway, you can understand that I was extra giddy when I saw Chris Vesque’s LEGO ’67 Chevy C-10. It has all the things I’d be into; an old-school dragster square-body with ground-scraping stance, a striking color scheme, a blown engine, copious silver bits and a racing number that matches the year of this custom Chevy. 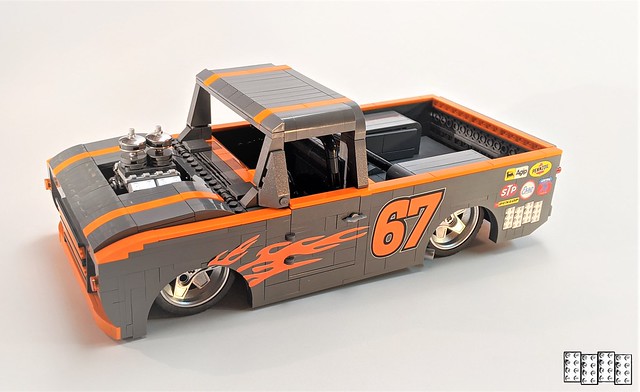 A commenter on Chris’ photostream even mentioned that this would be something I’d totally dig and his response was that indeed I was his inspiration for coming into the LEGO scene. Kinda gets you right in the feels, doesn’t it? I’m glad we can help inspire great builders like Chris in some way or another. Would it be uncouth of me to pull a Sally Field?