For LEGO’s upcoming gift with purchase, 40370 Push-Along Steam Engine, they are diving deep into the archives to celebrate the 40th anniversary of the release of 7180 The Push-Along Steam Engine set. This set was introduced in 1980 at the dawning of the 12v train era, and it’s quite a rare find these days. If you can find one still in a sealed box, you can bet it will set you back a bit. Lucky for you, this updated version of the model will be free with purchases over $99 / €99 / £99 available March 1st – 15th in LEGO Stores and Shop At Home. We got our hands on a copy before it hits stores to see what it’s all about. 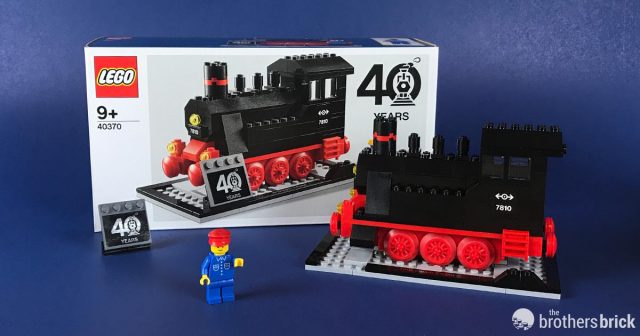 The set comes in a nice box, sporting the 40 Years and vintage LEGO System logos. The back features a few views of the model and its attendant base. Inside, you will find three un-numbered bags, two loose 2×16 red plates, and two 6×10 plates in light bluish-gray. Also included is a fifty-one-page instruction booklet and a sheet of lovely silver and black foil stickers. 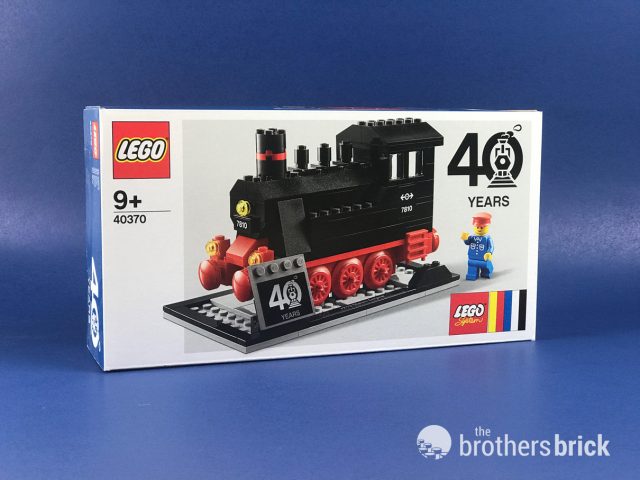 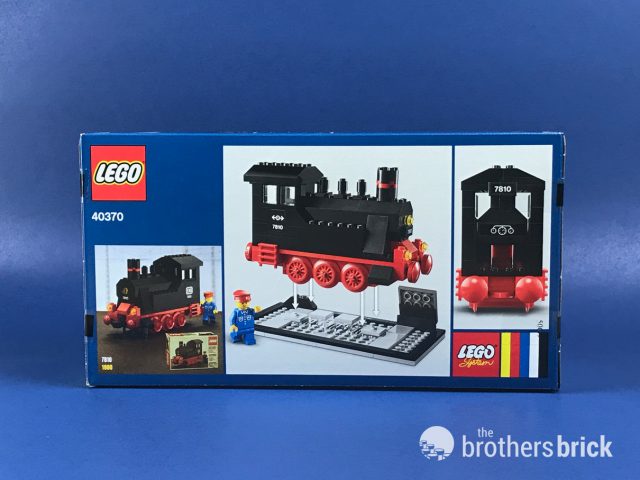 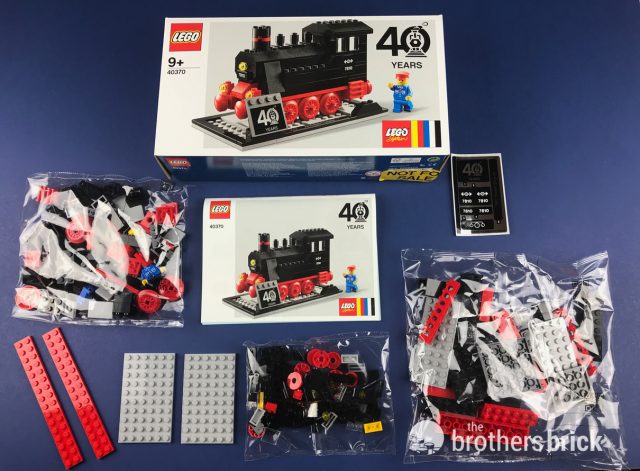 As it’s based on a model from 1980, this is quite a simple little build. Construction is divided into four parts. The display base, the train base, the train wheel section, and finally the train body proper. There are a few differences in the construction due to certain parts being no longer in production, which I’ll point out as we go along.

We start off with the display base that uses large light gray plates held together with black tiles. Light gray tiles are used to bridge the various plates in the center. Two columns created by 2×2 transparent bricks topped with plates support the center of the train while two 2×2 jump plates help keep the model attached to the base. The first two stickers are used here, the 7810 Steam Engine label and the 40 Years train logo. The train logo is supported by two black rocker hinges to give it a little tilt while on display. Two 1×2 slopes are used on the right side to display the conductor minifigure. 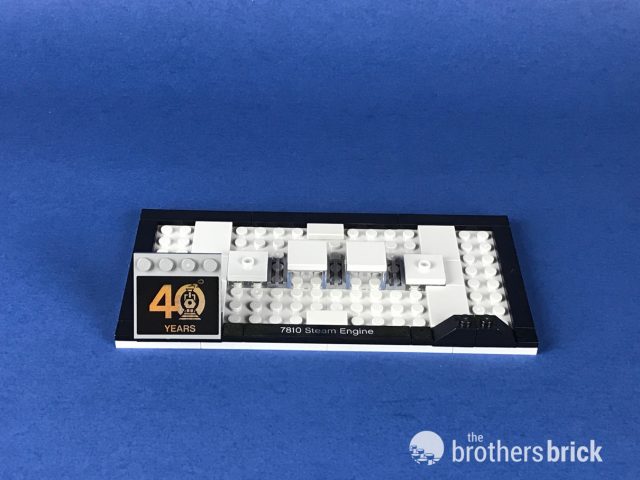 Next, we create the wheelbase, straightforward construction, but I liked seeing the L8 axels in red and the red train wheels. This is one of the first examples of the updating of this model as the original came with 4180c04 Wheels Train Spoked Small (23mm D.) and Black Brick.. 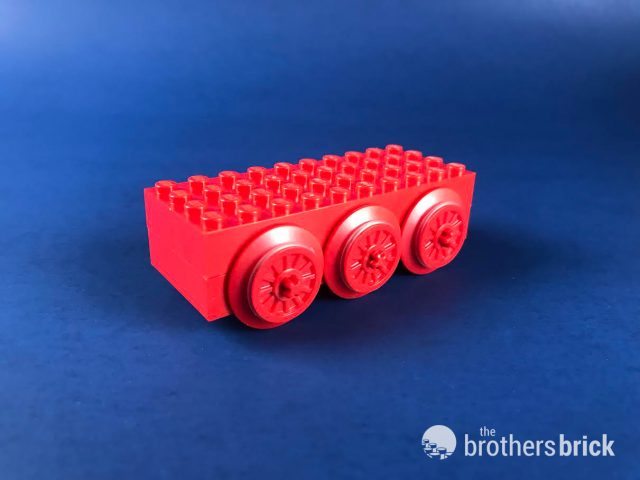 The next example of such an update comes with the next piece of construction, the train base. While the original model used part 4178 Train Base 6×16, this redesigned version has a base that uses simple stacks of red 2x plates to create the frame along with some simple black slopes and red train ladders. The bumpers are recreated with a round 2×2 tile with a hole connected to a 2×2 plate with rounded bottom and attached with a Technic pin. 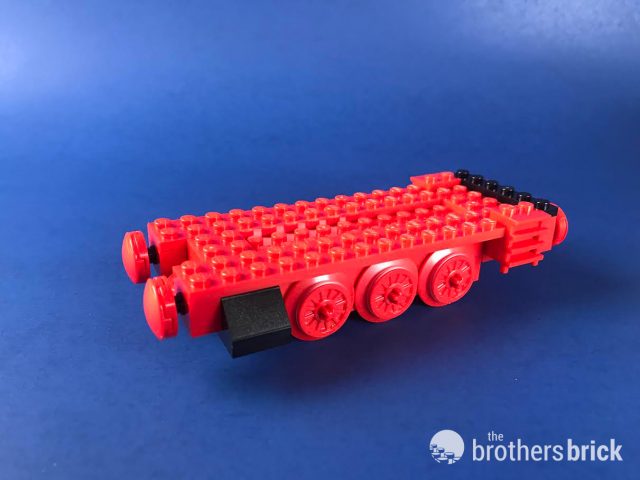 Now we move on to the main part of the build, which is the construction of the train engine itself. It’s a swift build at less than 80 simple pieces, and the construction methods are very basic in keeping with the original release. As a builder of architecture, I liked the inclusion of the four 2×2 black windows replacing the extremely rare vintage black train windows. Of additional note, here is another difference between the original and the new model, the side sticker. While the original gave the builder multiple choices of train companies on a clear sticker, the current build has the now LEGO standard train logo along with the 7810 demarcations on a reflective black and silver sticker. 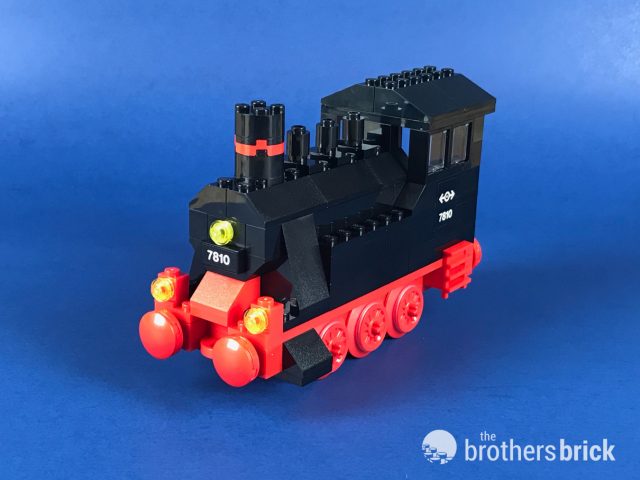 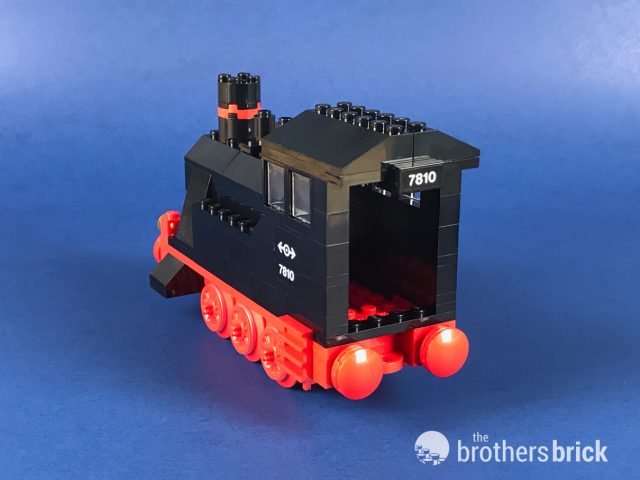 When completed, the train can be put on its base with the minifigure conductor on display as well as the 40 Years logo and nameplate. Its wheels turn, and it could certainly be played with, but this feels like something aimed more at adult collectors than kids. 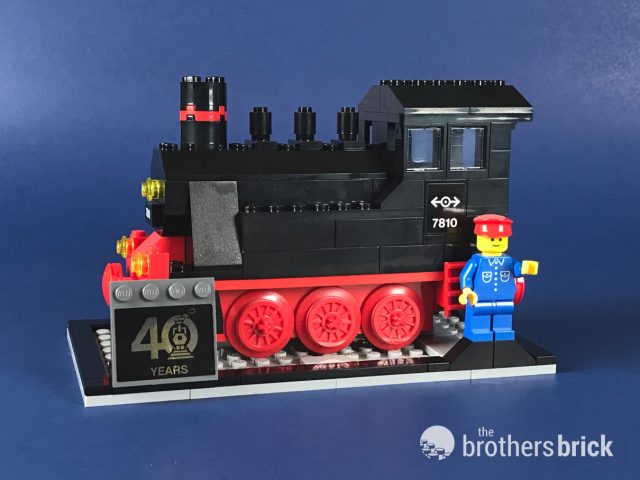 Like the original, the set comes with one minifigure, the train conductor. He is sporting the vintage 80’s style train conductor torso, blue with white buttons down the front, a collar, and two pockets. He also comes with plain blue legs, a red conductor’s cap, and the standard LEGO plain yellow smiling face. 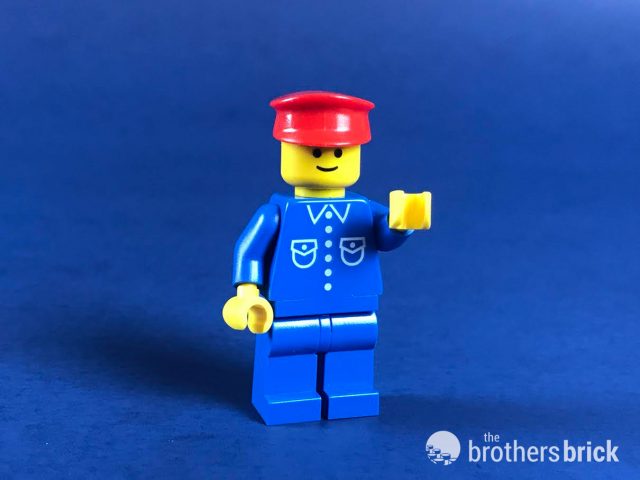 As a gift with purchase, LEGO 40370 Push-Along Steam Engine is a cute, nostalgic model that will likely be popular with train enthusiasts and those who like vintage LEGO sets. It does move and can technically be played with; however, it’s presented as a shelf item more than a toy. The build is simple enough that it can be put together quickly, and the addition of the base with its slick black and silver nameplate and 40 years logo make it an attractive display piece. The set will be free with purchases over $99 / €99 / £99 available March 1st – 15th in LEGO Stores and Shop At Home.