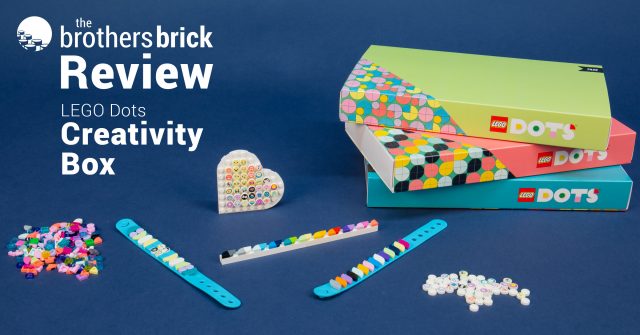 In advance of the theme’s release on March 1, LEGO sent us what they’re calling a Creativity Box. It is not a retail product and is instead intended to showcase the variety of parts Dots sets will include. So let’s dive in and take a quick look at some of Dots’ offerings.

The Creativity Box is a lovely black box decorated in a Dots motif. It says it contains 5,000 pieces, which sounds like a lot until you realize that 80 percent of them are 1×1 tiles that wouldn’t even full a standard large Pick-A-Brick cup. The parts are divided inside into six boxes. 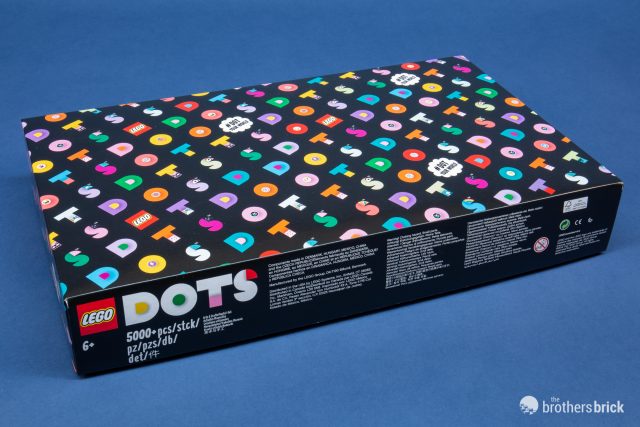 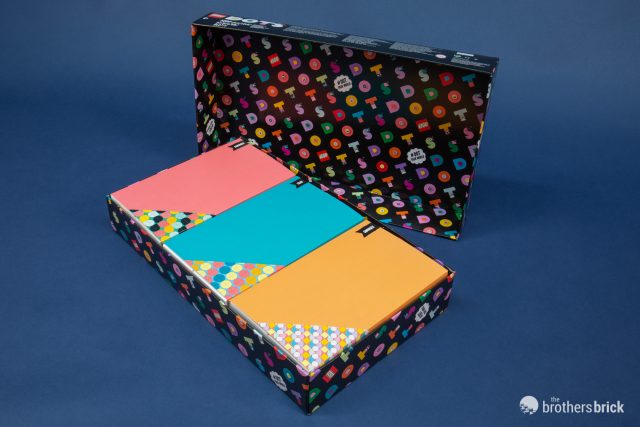 Each box is labeled for the “type” of part it contains: tiles, connectors, or canvases, and inside the parts were arranged beautifully. LEGO should take notes from this for their standard retail packaging. 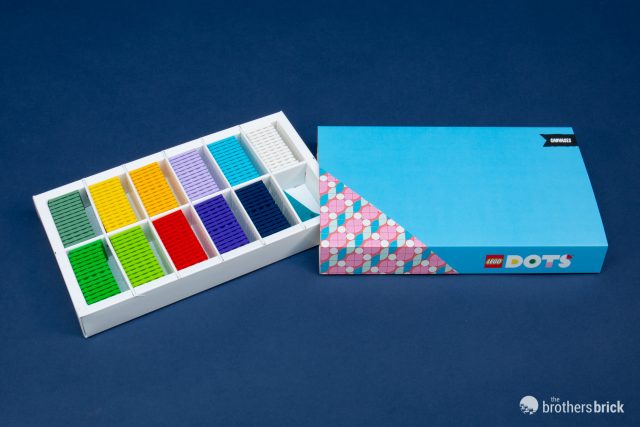 Some of the tile trays did get a bit mixed up from shipping, and I wasn’t about to sort 5,000 pieces for a quick review, but I’m sure they were lovely before that. 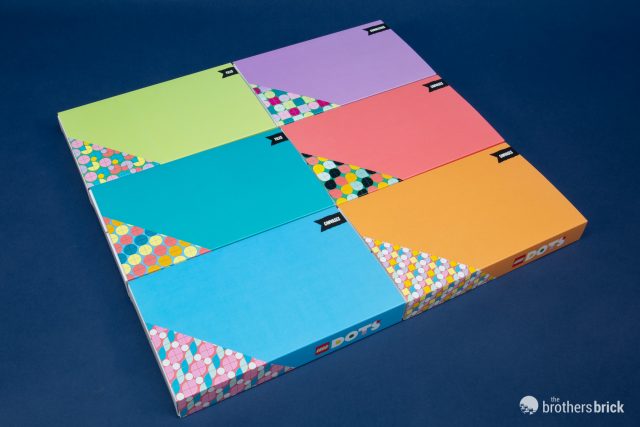 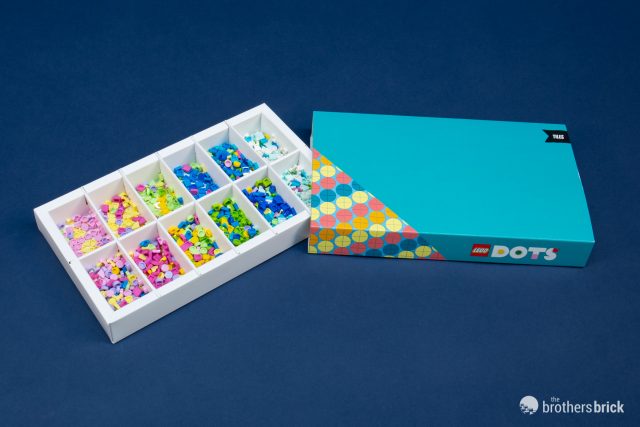 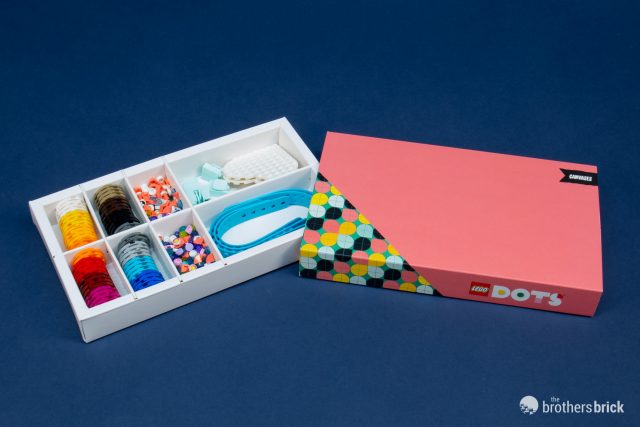 What LEGO had in mind when sending us this box is that I’d build something cool. But as I’m writing this, it’s the end of a long weekend and my creativity is pretty well shot, so let’s just take a look at the parts in the Dots theme, so you can get a better idea of whether or not Dots is for you. (Please see your doctor about Dots. If you’ve been experiencing Dots, you may be a tween girl or have AFOLitus.) 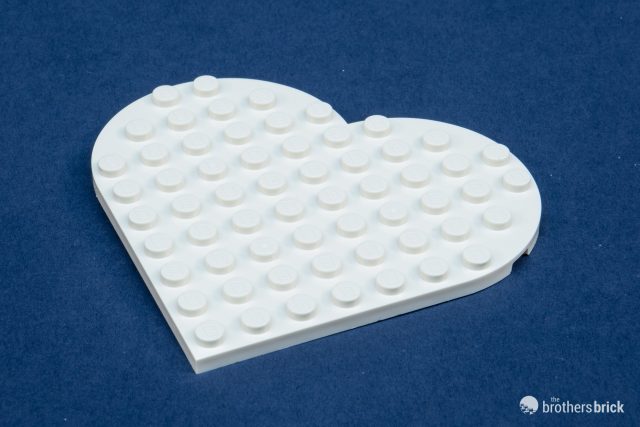 With a few thousand tiles, there’s a tremendous variety. We can’t confirm whether all of these parts will be available in the retail sets, but it certainly would be odd for LEGO to include something here that won’t be in the regular sets. And if you’ve been needing more 1×1 tiles in a huge variety of colors and shapes, then this is the theme for you. I counted 1×1 quarter circles in 21 colors, and while none of them appear to be new, it’s amazing to get such a wide variety together. 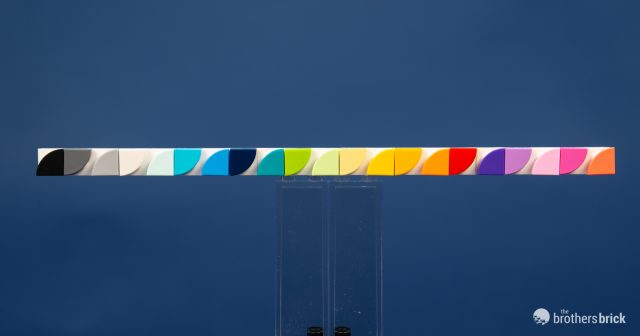 There were also loads of 1×1 square and round tiles, as well as 1×1 half-circle tiles, though none in quite such a stunning variety of shades.

Then there are the printed tiles. The Creativity Box doesn’t appear to have included any of the printed tiles from the five bracelet sets, so I’m guessing instead I received a handful of the 109-piece 41908 Extra Dots – Series 1 set, which runs just $4 and appears to have a somewhat randomized selection. I picked through the printed tiles and assembled a master selection of what I got, showing a ridiculous 50 unique prints. And there are still some in the official set images that I didn’t receive here. The 50 I got range from emojis and hashtags to avocados. Clearly, LEGO is tapping into the zeitgeist here. 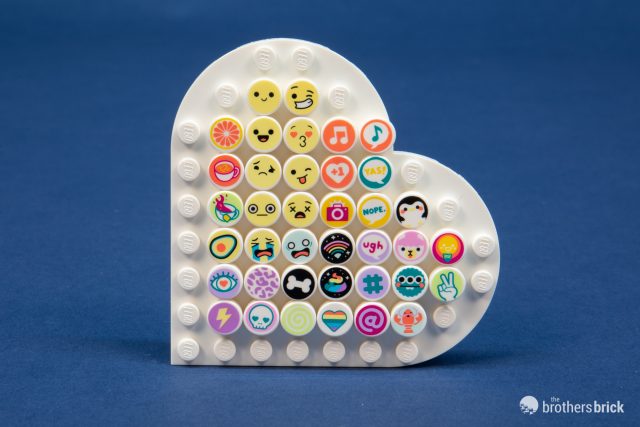 Then, there’s my favorite piece of the box, the new 1×1 faceted round tile. It’s an octagonal, gem-shaped tile with a slightly rounded top, part 65032. It comes in a new color that I’m guessing will be called Transparent White Opal. It has similar opalescent properties to the new colors in some of the Trolls sets. 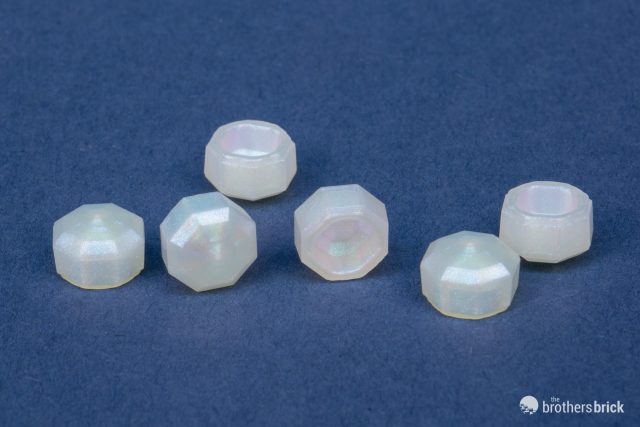 In profile, it’s taller than a standard tile, but shorter than the two swirl elements. Hopefully it won’t be long before we see it in more colors. 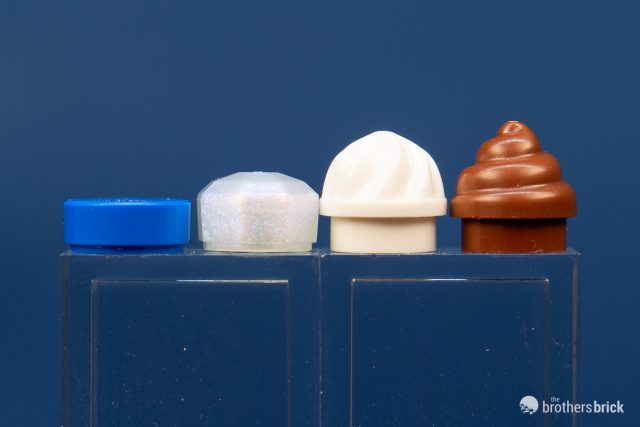 Next are the 1x2x2 bricks with paper holders (part 37452), which are available here in light aqua. They’re a standard 1x2x2 brick with a special tab on one side for holding paper, printed photos, etc. They’ll be a common fixture in Dots sets for desk organizers and picture frames. The surface of the tab has a slightly rough texture, slightly smoother than the texture on slope bricks. 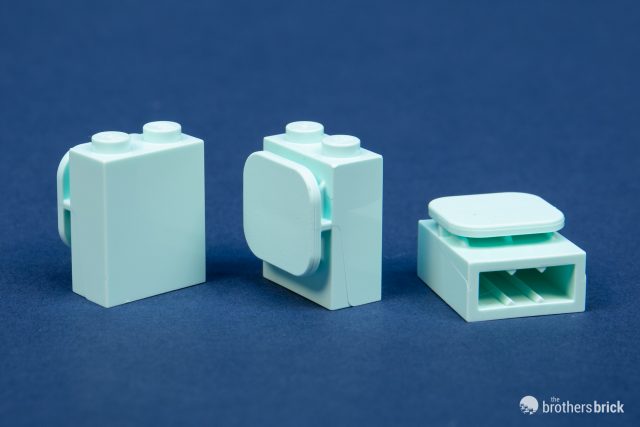 The brick can accept paper from either the top or the bottom, and it’s held in thanks to a series of small ridges beneath the tab. 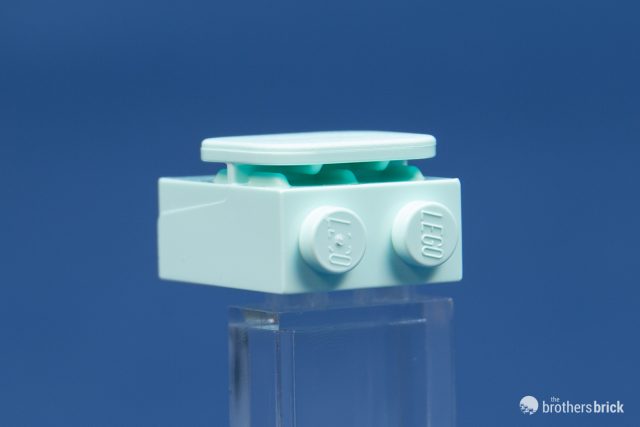 And finally, the element that’s most directly tied to the theme, the bracelet strap, part 66821. I received a few in medium azure, but they’ll also be available in the sets in black, lavender, magenta, and teal. They’re a soft rubber that’s highly flexible and feels very durable, though we’ll have to see how well they’ll stand up to everyday wear. The top features two rows of 14 studs. The bottom is smooth except for small dimples beneath the studs. The band itself is about a half plate thick and just wider than a 2-stud plate. I can imagine a lot of uses for these in fan models to create curves that would otherwise be exceedingly difficult or fragile. 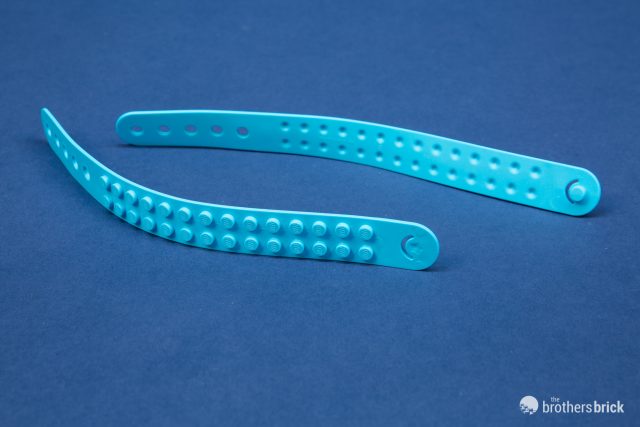 There are five adjustment holes which are also stud-sized. As an adult male, I’m not exactly the target demographic for these adornments, and the band doesn’t fit around my wrist at all. It just barely fits around my wife’s wrist on the largest notch. She did a few test designs for me, and the tiles stay in place quite well, with the studs on the bands having solid clutch. 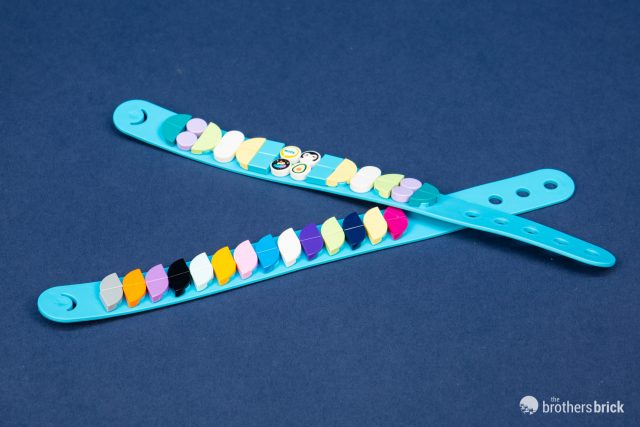 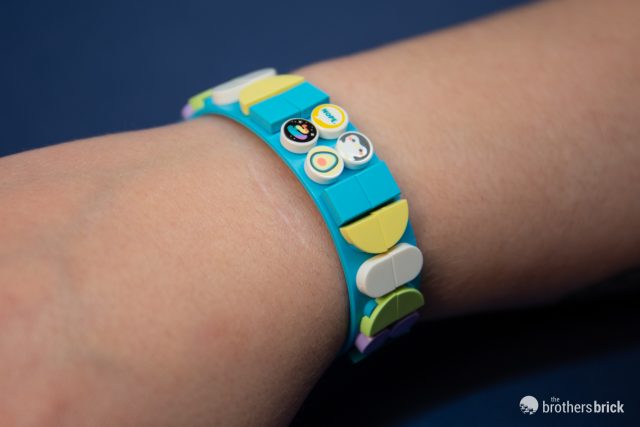 LEGO Dots won’t appeal to the majority of adult fans for its intended purpose of jewelry and tchotchke making, but given its low price points, wide variety of detail elements, and breadth of colors, I suspect it will be a hit with fans nonetheless. Every piece in the Dots theme that I’ve handled so far seems to fit well with the LEGO aesthetic (emoji prints notwithstanding) and is a useful addition to the current palette of elements. The larger sets are sure to be popular for drafting, and the smaller ones are so cheap many fans are likely to buy them on a whim just to get the new pieces. The bracelets are slated to run just $4.99 USD, which is a “why not?” price for most fans I know.

We’ll be sure to bring you more news and reviews on LEGO Dots soon.

The LEGO Group sent The Brothers Brick this set as part of an advertising campaign. Providing TBB with products guarantees neither coverage nor positive reviews.