Some LEGO builds look like they are made from tiny studded pieces of plastic. That’s appropriate, because that is what they are. However, some builds are done so sleekly that nary a stud is showing, save for representation of a specific detail. These builds cause the viewer to do a double take, and this author has been known to utter a muffled “holy bleep, that’s LEGO” from time to time when seeing them. This truck by Dennis Bosman is one such build. It’s a refrigerated Volvo F12 truck, branded for the Stie’s Termo Transport company from Norway. It is way too big for minifigs (it’s 1:13 scale, as opposed to roughly 1:25-1:42 for minifigs, depending on the relevant dimensions), and scaling it that way allowed Bosman to include mind-boggling details. The cab lifts open to reveal a fully equipped engine, the cab is plushly furnished, the trailers are studded both inside and out, and even the refrigeration units on the trailers have motors inside them. 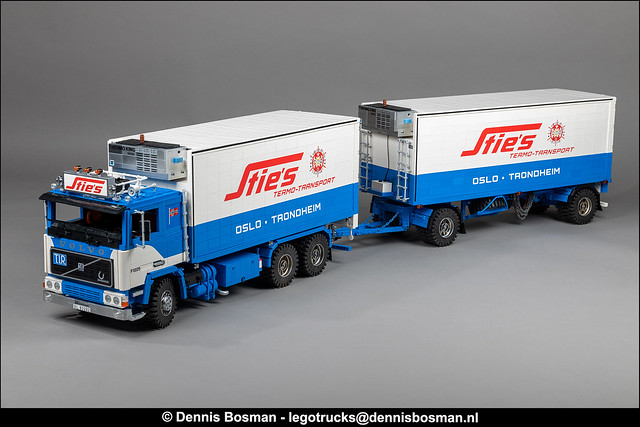 The machine looks solid from every angle, demonstrating an impressive attention to engineering. I suspect there is some custom metallic finish on some parts, and there are definitely custom stickers, but those serve to enhance the overall appearance (so the purist in me can hardly complain). I love the gas tanks with the cleverly constructed bands around them, and the cab interior leaves me in awe. There are tire chains in the back using multiple colors, including brown to show a bit of rust. There’s even a few non-production blue chains in the model. My favorite part use, though, is probably the spears for wiper blades. 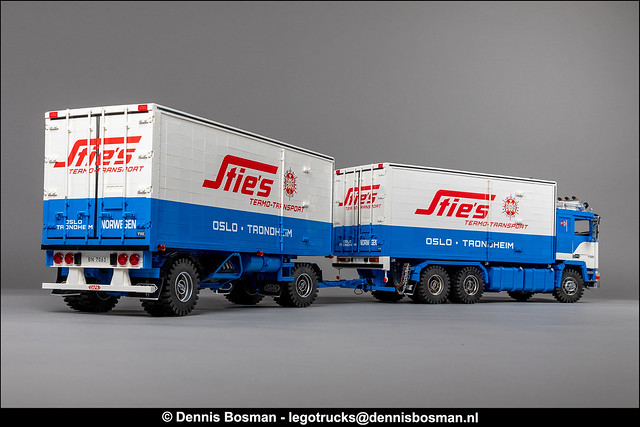 The engine is a masterpiece all of its own, with lots of sand green to imitate the old engine color of the original. Lots of hoses and even video cameras give a sophisticated and technical appearance, and while I am no motorhead, it looks enough like what I see under the hood of my own car to be believable. And with the attention to detail shown elsewhere, I am sure the features are pretty close here, too. 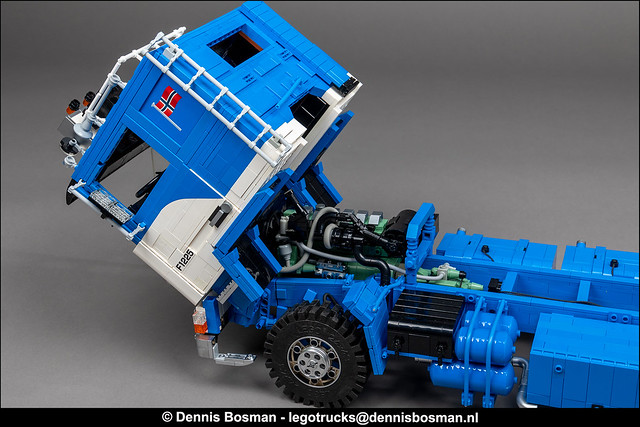 You should check out the full Flickr album to ogle over all the details yourself.