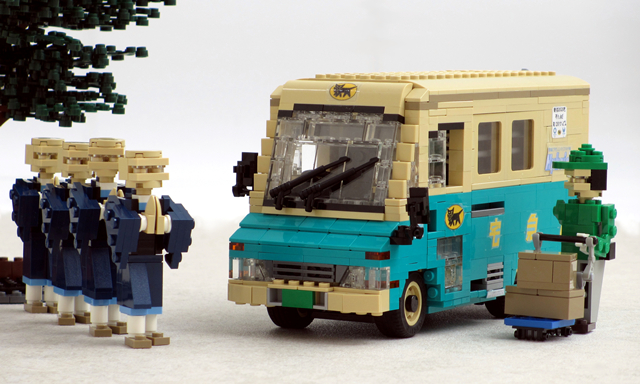 It was one of best LEGO events I’ve ever been to. It was also far more international than I had anticipated. The majority of exhibitors and visitors were Japanese, of course, but there were considerable contingents from Taiwan, South Korea and other Asian countries, as well as about a dozen people from North America, Europe, Australia and New Zealand. Andrew, Edwinder and yours truly represented the Brothers Brick. To get an impression, I highly recommend you check out the slide show of the event made by Stijn van der Laan. After BrickFest, five of us (Stijn, Andrew, Niek van Slagmaat, Nick Vas and I) traveled inland to spend a few days in Kyoto. This is Japan’s former capital and is still seen as its cultural capital today. Since Andrew grew up in Japan and speaks the language fluently, he served as our guide.

Much of the coast of Osaka Bay is an urban and industrial sprawl, with high-rise buildings, port facilities and warehouses criss-crossed by elevated roads and rail lines. Rokko Island is decidedly more tranquil, looking like an eighties vision of a future that never came. Kyoto has a very different vibe. The city was spared bombing during WW-2 and the leafy hills around the heart of the city house several ancient Buddhist temple complexes with Zen gardens and Shinto shrines. We spent a couple of days exploring these. It was a wonderful and welcome experience after the hustle and bustle of Kobe and Osaka. Modern-day Japan was never far away, though. That’s where the van comes in. While we strolled through the Daitoku-ji monastery, we came upon the most glorious Japanese van that I’ve ever seen. It looked completely out of place in its surroundings. And yet, in Japan that sort of juxtaposition is exactly what may lie around any corner. 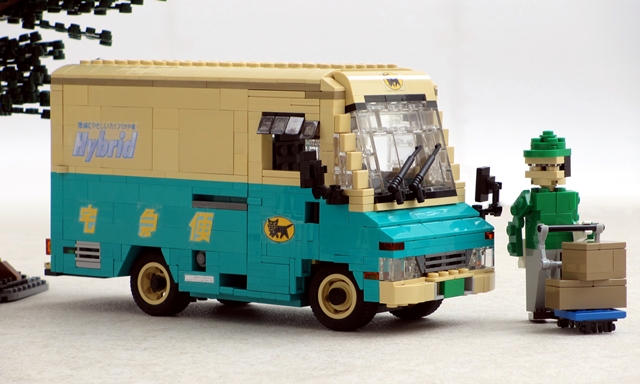 The van is a Toyota Quick Delivery, in the livery of Yamato Transport (ヤマト運輸株式会社). This is a courier service also known as the black cat company (黒ねこ) because of its logo. It represents a mother cat carrying her kitten to safety, which symbolises the care that Yamato takes when delivering your packages. I don’t know whether they really are that careful, although, given that the company is Japanese, they probably are. And in any case, it’s cute. Since all five of us are LEGO builders and since I built several Japanese vehicles to display at the event, we immediately started discussing how to build the van. The colour was a potential problem. As long-term LEGO fans may know, LEGO designer Mark Stafford killed Teal. LEGO reintroduced the colour in 2018, but I figured it would not be easy to work with. Fortunately, the parts palette is actually pretty good for a boxy vehicle. There are a lot of small plates, bricks and tiles. The van is a textbook case of “form follows function.” Like superficially similar American step vans, it is tall enough for the driver to walk through it but, because it needs to fit in tight Japanese streets, it is quite narrow. It is also asymmetric, with more windows on the kerbside than on the driver’s side. The large windscreen and low nose provide excellent visibility, and the sliding doors offer easy access to the cab. It’s a bit odd, but really cool in my book. Andrew suggested that I add the monks to represent the contrast.

2 comments on “Juxtaposition in Japan”