When I looked over the new 2020 wave of LEGO Ninjago sets, one immediately stuck out among the dragons, mechs, and other usual Ninjago fare. 71708 Gamer’s Market is a small set crammed with nine minifigures, along with three small booths. Other themes have long had people packs and army builders, with City and Star Wars providing the most well-known recent examples, but apart from blister packs of figures, Ninjago has always balanced minifigures with the brick-built parts of the set. With 218 pieces and nine minifigures, 71708 Gamer’s Market retails for US $29.99 | CAN $39.99 | UK £29.99 and is available now. 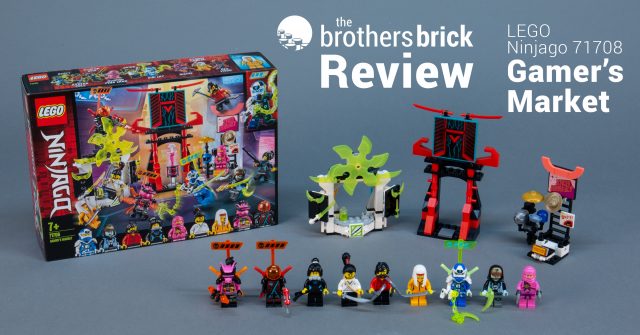 As any modern video gamer knows, microtransactions are where game publishers make the big bucks these days, and it’s no different for the new Tron-like digital world in which the latest season of Ninjago is set, so the Gamer’s Market is where you can outfit your character with all the latest gear, from katanas to hats.

The box and build

With just three small booths to build, there are fewer parts than in most Ninjago sets at this price point due to the abundance of minifigures. The parts divided into three numbered bags, with each containing a booth and three figures. There’s a decent-sized sticker sheet, which like many other 2020 Ninjago sets includes a segment of bonus stickers to apply on other pieces you already own. This set includes a block of 16 extra stickers, despite the set using just six. 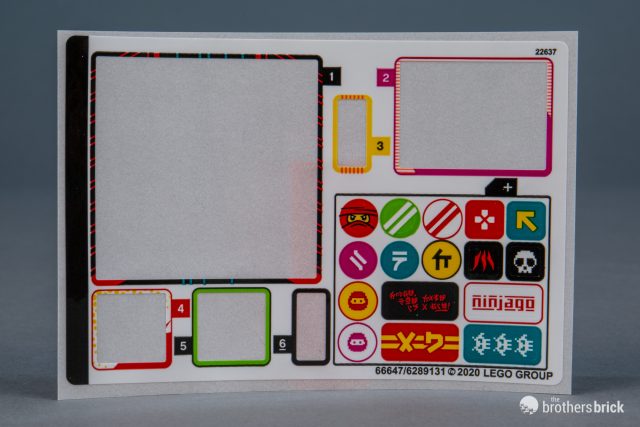 The three builds are stalls in the titular gamer’s market. Each stall has a different aesthetic, all set in the faux Asian-cyberpunk style that dominates this season’s offerings. 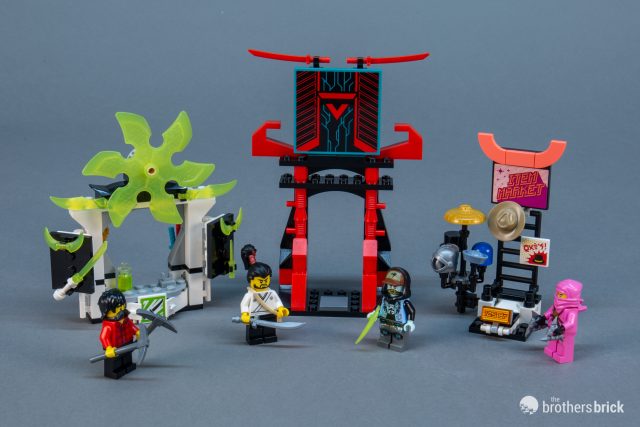 The first booth is actually a small shrine, with an almost-not-quite torii arch style. It includes one of the key blades–these important devices activate functions in most of the sets and are definitely this season’s McGuffins. The trans-pink key blade sits in a floating totally-not-a-Mario-cube block with a question mark sticker on the side, giving it a digital sword in the stone look. 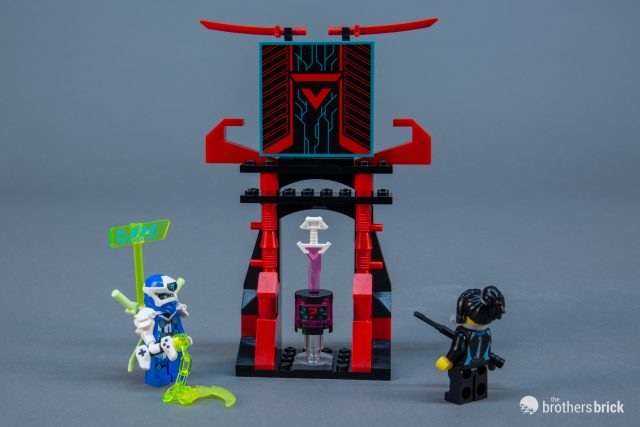 The second booth is a weapon merchant, signified by a giant trans-neon green throwing star spinning above the stall. The booth has a variety of trans-neon green weapons for sale from the Ninjago weapons pre-pack bag. Currently, this color is exclusive to this set. 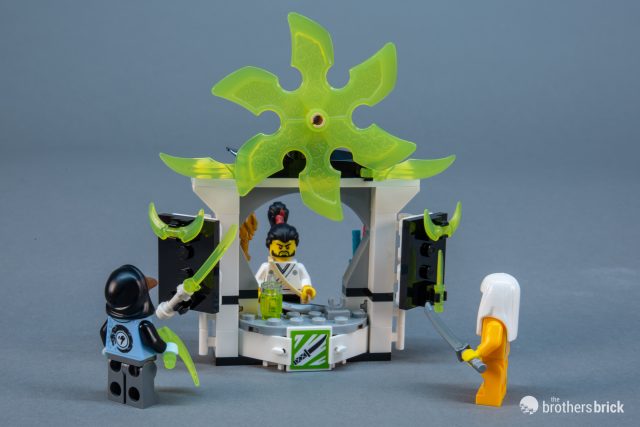 The proprietor Okino keeps the special weapons behind the counter. 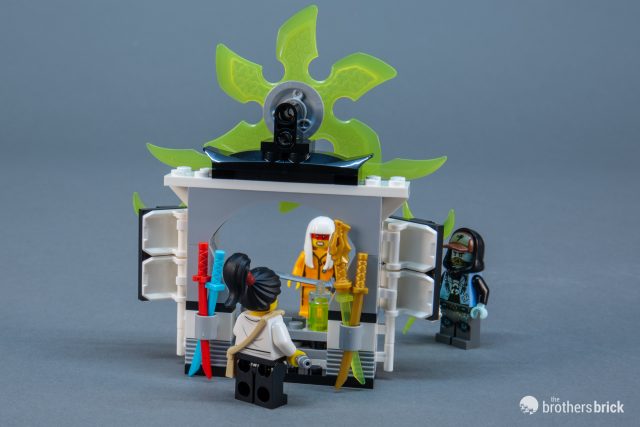 Finally, the third booth is the one that gave me the most laughs. After all, what’s a video game without lots of crazy hats to collect? 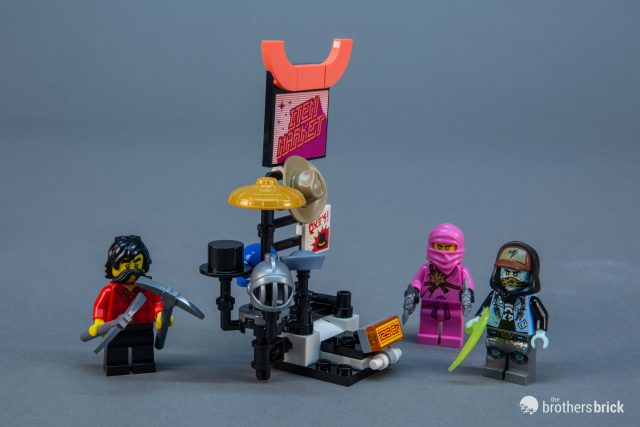 Named the Item Market, this booth lets you try on hats from a wide variety of genres. While a special mechanized play function to swap hats would have been amazing, in a set this small imagination and nimble fingers will suffice just fine. 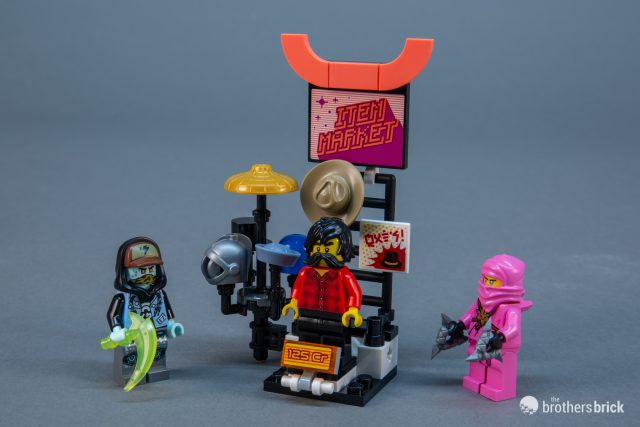 The hats are pretty standard fare, with one exception: there’s a blue classic space helmet. Benny’s been waiting a long, long time to buy a new one without a broken chin strap. The last time a set included this helmet in blue was 1988. (Pedantic side note: technically the mold has been slightly updated from the ones in the 80s, but for all practical purposes it’s the same.) 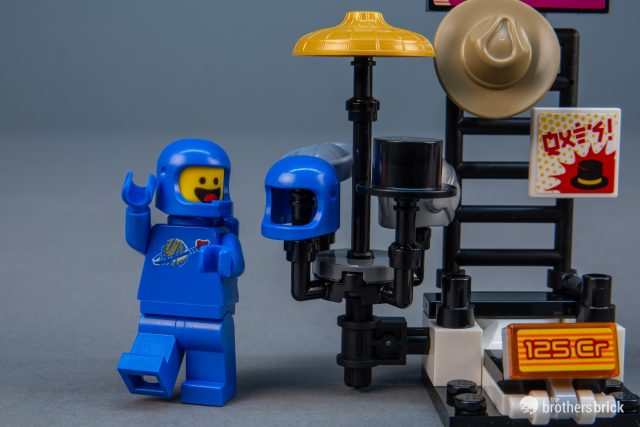 This set is the quickest shortcut to getting loads of the new minifigures from the 2020 Ninjago wave, with three in-game characters (denoted by character stats hanging above their heads) and six more regular minifigures. 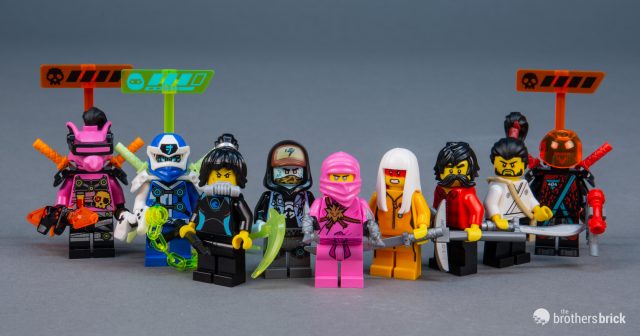 First up, let’s look at the digital players. Digi Jay (in blue) here is identical to the version included in 71715 Jay Avatar – Arcade Pod. He carries a white and black controller weapon with bladed chain. To his left is one of the Red Visor villains, the generic cyber bad guys of the video game world. I’d guess they’re fairly hard to find, since the insignia reads 404. 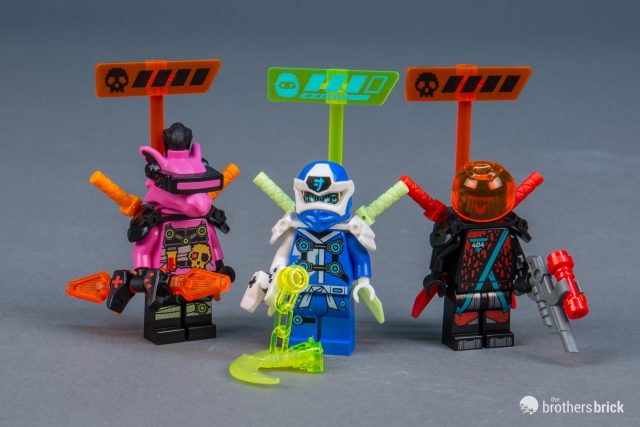 Both Red Visor and Kai each have double-sided heads.

Then there’s Richie, who looks like a Jim Henson creation pulled straight out of the 1980s, like a cyberpunk Alf. Richie is part of the Rat Pack, a group of evil rats who serve Emporer Unagami. The pink head is an all-new mold, with the Geordi La Forge visor molded in. There’s a hollow stud on top to connect the black ponytail. Richie carries a black and red controller with two short trans-neon orange blades. 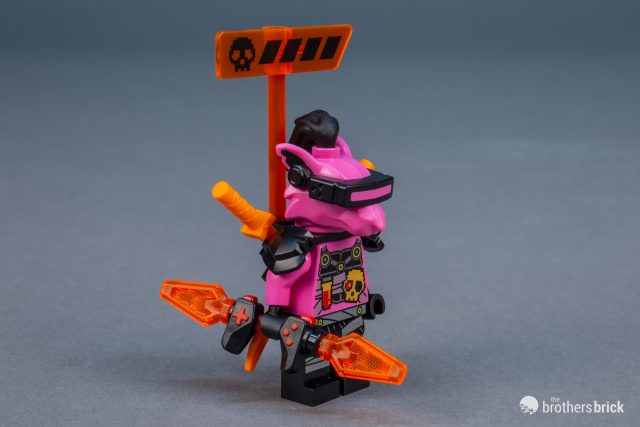 We already examined some of the other new parts in our Ninjago Arcade Pods review, but for a quick recap: the signposts are a new element that accepts a bar on both the top and bottom, and it attaches to the minifigure via a Bar 4L (lightsaber blade) which sockets into a newly developed crossing scabbard shoulder pad element. 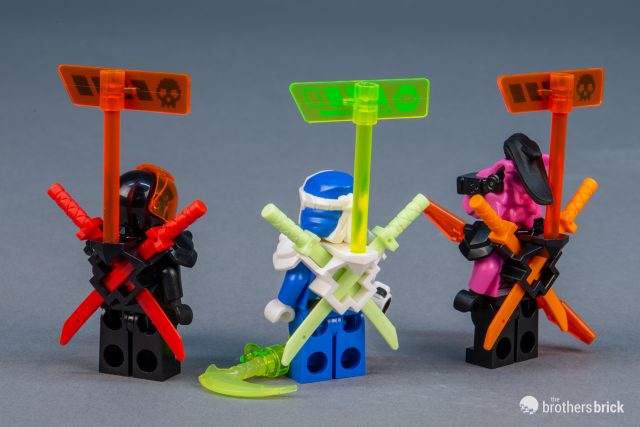 Next up are Scott, Avatar Harumi, and the merchant Okino. Scott is a new character for this latest season and wears street clothes, with a hat/hoodie combo piece borrowed from the Hidden Side theme. Avatar Harumi, a longtime antagonist to the hero ninjas, gets a nifty new tracksuit that’s totally not inspired by that one Quintin Tarantino movie, because kids don’t know about that. Okino sports a shoulder bag and a new hairpiece with a very, very tall topknot. 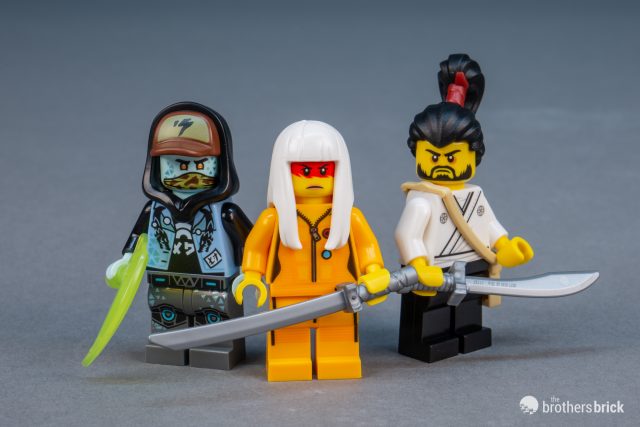 All three minifigures have back printing and alternate expressions.

Finally, the last three minifigures are Avatar Pink Zane, Avatar Nya, and Avatar Cole. They each appear to be in various stages of the character creation screen, trying on a wild array of outfits. Zane, who’s typically dressed in white, is rocking a pink mask and suit this season, and it’s great to get another color of Ninja, including a new color for the original Ninja head wrap. Kai’s younger sister Nya sports a wetsuit and rebreather and is armed with a speargun. Cole meanwhile looks ready to pan for some gold with a flannel shirt, flowing mustache, and double pickaxes. 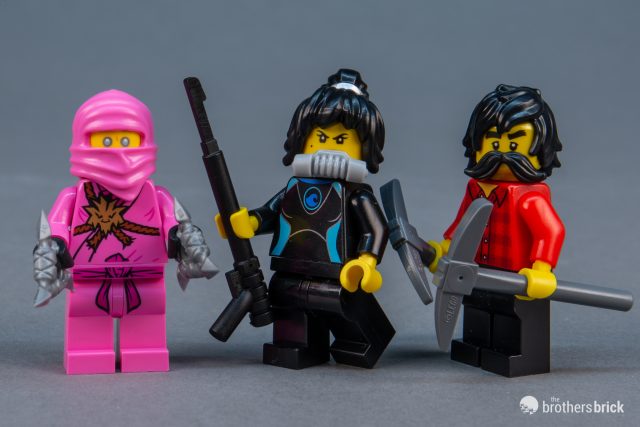 Like most of the rest of the figures, they each have double-sided heads with various expressions.

This season of Ninjago brings a lot of interesting new characters and redesigns, so it’s fantastic to get a set that allows you to pick up most of the cast in one swoop at a reasonable price point. The brick-built sections aren’t anything special, but they serve their purpose well even though most people will be buying the set for the minifigures. If you find your minifigures end up in a bin while you build cool models with the bricks, this probably isn’t the set for you. However, if you’re a minifigure person, and you’re only going to buy one Ninjago set this year, this is the one to get, since it has a sampling of nearly all the most interesting characters from the other sets. And it goes almost without saying that kids who are invested in the TV show and love the Ninjago universe will be delighted by this set.