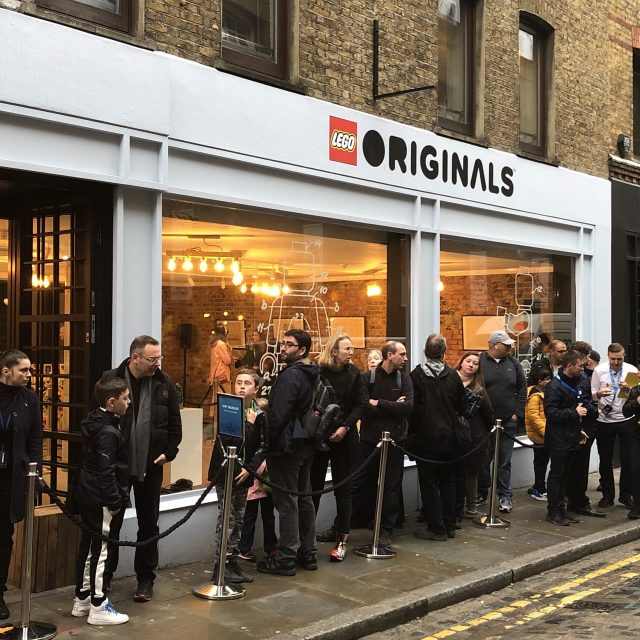 Once inside the gallery, visitors can get a good look at the display of wooden minifigures decorated by LEGO designers and guest artists. These are all impressive, and give some idea of the creativity that can be applied to the bare wooden figures. The standouts for me were the Half-Man Half-Squid creation by Jake Blais, and the carpenter’s workshop diorama built by Mel Caddick… 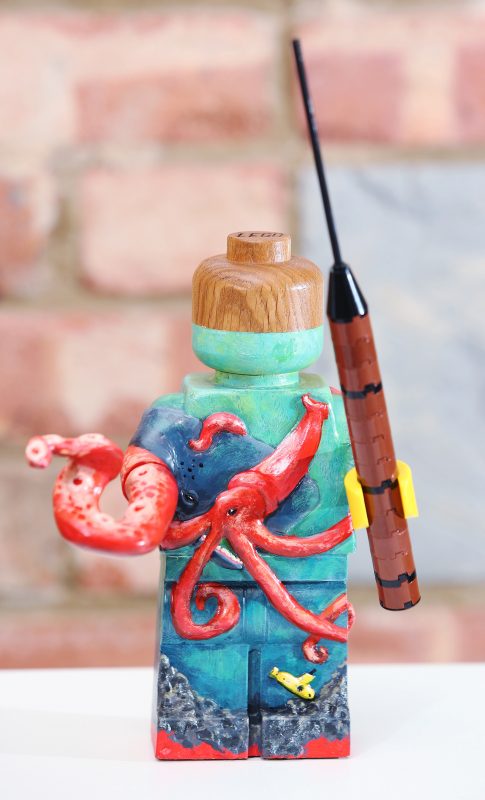 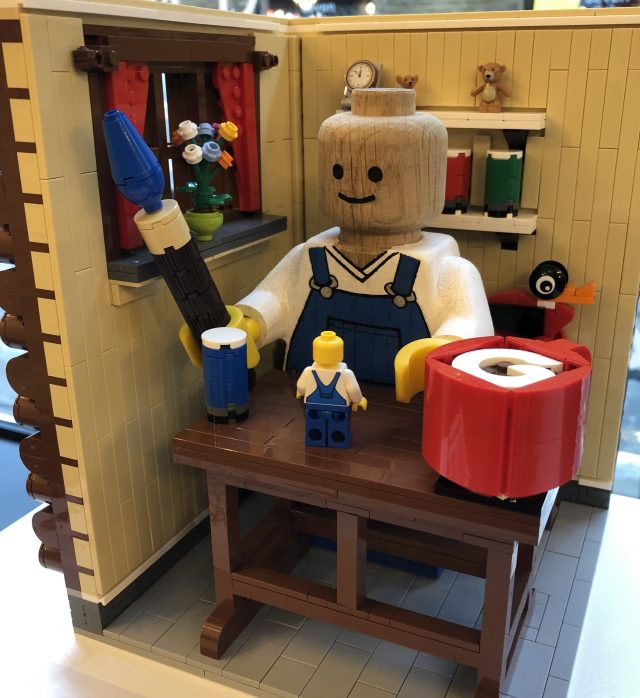 Beyond the decorated figures, the gallery also plays host to framed posters of LEGO blueprints and designs from across the company’s history. These look good, and visiting fans will likely add them to their LEGO wish lists. 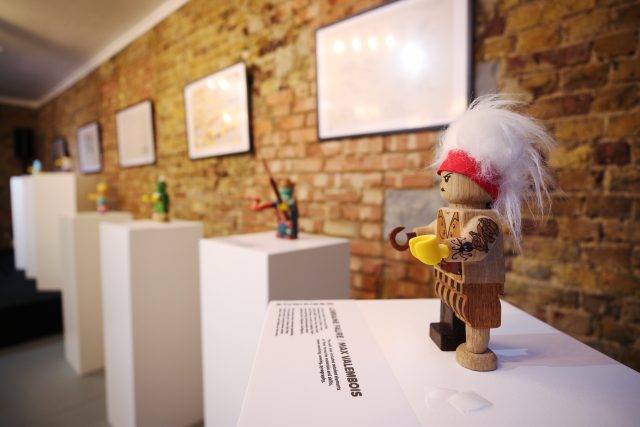 After the gallery opening, we caught up with Sine Klitgaard Møller, the project’s Design Director. We discussed the thinking behind the wooden figure, and where the LEGO Originals range might go in the future… 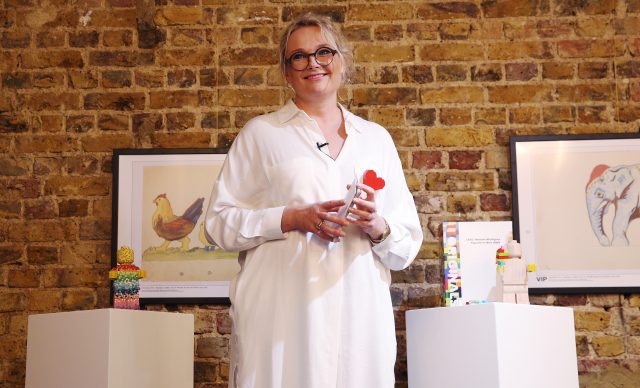 The Brothers Brick (TBB): The new wooden minifigure and the wider concept of LEGO Originals seem to fit a number of macro consumer trends — notably collectability, personalisation, and nostalgia. Was any particular one of those a driving force behind today’s launch?

Sine Klitgaard Møller: All of them were. These trends all came together with a desire to celebrate a LEGO icon of creativity. Since its introduction in 1978, both adults and children have taken the minifigure to heart as a creative icon. We wanted to further elevate the minifigure by celebrating it in a high-quality and precious material. And, along with that, we see trends of designers exploring new and different materials — a journey the whole world will need to take in the future.

TBB: Talking of being precious, the figure is described as a “rare” Limited Edition, but it will be available globally from 8th November. How limited is it? How many will be produced?

Sine: I can’t tell you the exact number, but it is a limited production run, and will be limited in distribution to LEGO brand retail stores and online. We’ve never done anything like this before, so we’re still figuring out how big things like this could be. We’re pretty sure the figure will run out, but we’re not sure yet how quickly that will happen.

TBB: Is this figure part of a trend for more LEGO exclusives like the Comic-Con releases? Or do you think we’ll see fewer exclusives in future, as with the recent move to make regional sets available globally?

Sine: Everyone is looking for exclusives — people like them. But we have to balance that with our desire to provide bricks to as many people as possible, wherever they are. We will continue to do the occasional exclusive or more limited pieces, either through events, or small runs, or sometimes through price. Something like the UCS Millennium Falcon for example — it’s pretty exclusive, even if it’s not “an exclusive”.

TBB: The figure is described as the “first in a new series”. What can we expect to see from the LEGO Originals range in the future? How frequent might Originals releases be?

Sine: I have no idea! This is the first one. There will be more. But as for what they are, that will depend. We have lots of ideas, and we had some concepts which could have been the first launch. However, this is the first time we’ve done anything like this. We want to see how it goes, how it’s received, and hear what the fans say about it.

TBB: When it came to developing this first release, what was the prototyping process like? Were the prototype figures hand-carved or machine-tooled?

Sine: From the beginning we were machine-tooling the wood. We have our own prototyping workshop in Billund where we’re used to building prototypes for everything we make. They developed some of the initial versions, but we also worked with Room Copenhagen, our design partners on this project, and with their workshops. As you might imagine, there were lots of prototypes made. In fact, most of the decorated figures on display in the gallery are early prototype figures — most of them were decorated six or seven months ago, before the final production versions were available.

TBB: Those designers did a good job of keeping the project secret…

Sine: They certainly did. We locked them away for months and told them to keep quiet!

TBB: How did you decide on the 5:1 scale? Did you look at other possible sizes?

Sine: We’re a systems-thinking company. We have a system of different scales we like things to fit into. It became clear 5:1 was the obvious choice — it would mean the hands could grip a 2×2 round brick, making it easy for people to build accessories for the model. And beyond that, there’s a certain size you have to make it for the wood to remain strong. We spent a long time on scaling because safety is just as important with something like this as it is with our bricks. Any smaller for a wooden model and there would have been an unacceptable risk of the wood breaking.

TBB: The model has moveable plastic hands. Was that always in the plan, or was there discussion of an all-wooden figure?

Sine: We always wanted the model to have a function, some playability, rather than being an art piece which would just sit on a shelf. The figure being able to hold things adds more opportunities for personalisation and creativity.

TBB: With regards to creativity, was the figure always intended to be a blank slate encouraging decoration and personalisation? Was there ever any thought of selling decorated versions depicting classic minifigures from LEGO’s history?

Sine: We went through many concepts in the development of this project. Yes, we discussed classic minifigures, but we’ve launched over 8,000 minifigures over the years. We couldn’t possibly have captured what is “classic” for each individual person. How could we have catered for the different fans of all the different themes? So instead we decided to celebrate the icon rather than any individual character, and to give people a canvas to be creative themselves.

TBB: The development process has obviously taken some time. How exciting is it to finally see the wooden figure on sale, and on display in an art gallery in one of the trendiest parts of London?

Sine: It’s amazing. I still can’t believe it. The brand retail team have done a great job. It’s mind-blowing to see the launch campaign come to life in this way, and to see people’s response to the idea.

TBB: Does LEGO belong in a gallery? Can LEGO be art?

Sine: Whatever you create is art. When a child holds up their brick creation for their parent to see, and they feel proud of what they have built — that is art. And then, with something like this, when you challenge artists and designers with a wonderful blank canvas — it’s just amazing to see the results. There’s no doubt these figures deserve to be in a gallery.
When we gave the two UK artists [Kelly Anna and Tom Harrison] their figures and asked them to create bespoke designs for the shop, they only had a few days. The quality of what they produced was wonderful. 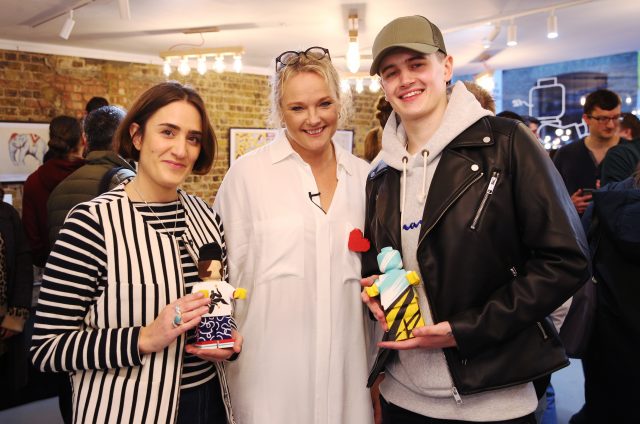 TBB: One last question… Do you have a figure? Will you be decorating it, or will you leave it blank to celebrate the idea of giving people a canvas?

Sine: I don’t have one yet! Obviously I dealt with many of the prototypes, but I don’t actually have one. Numbers were so limited, the designers who were going to decorate them were the priority. I’ve been told there’s one waiting for me back on my desk. I’m really looking forward to having one of my own.

I’m going to challenge myself with it. My original speciality as a designer was in textiles, so I’m going to see what I can do in that area. After working on the project for so long it will be fun to finally decorate a figure!

Look out for the Brothers Brick review of 853967 Wooden Minifigure — coming soon.