When I was a kid, I loved riding in the car on the way to my grandma’s house, watching the railroad tracks that were along the highway for much of the way. It was the peak of excitement when I saw a long freight train chugging along, with what seemed like miles and miles of boxcars or coal cars or tanker cars. The best part was always the graffiti on the sides, full of vibrant hues and indecipherable words. The trains I saw were all diesel, as I am waaaaaaaaay too young to have seen steam engines out there in the wild, but I did watch a lot of Shining Time Station on TV, so you might say I am an expert. One can learn a lot about trains from Thomas the Tank Engine! One could also learn a lot about trains from Alexander, I bet, based off this huge display that he and his crew put together for a LEGO show. It’s got everything, with every sort of train, houses, roads, terrain, and even a massive roundhouse. Check out this slick shot of two engines rounding a bend; they’re so pretty! 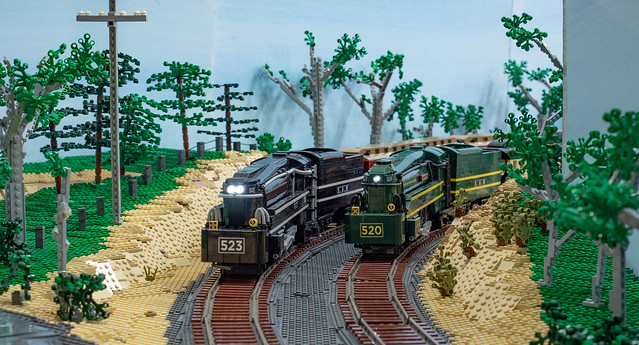 The roundhouse can house I know not how many engines, but it looks like a lot. The alternating dark and light grey on the roof and siding make it look just like corrugated steel, and the rusted patches are perfect. This is one use of studs that is appropriate, approximating the wavy texture of the steel.

Then there is the town, with numerous houses and shops, streets with traffic, a park, churchyard, and a pond (which naturally necessitates a train bridge, because those are cool). I love the sidings and stations, as no train layout would be complete without them. I have played with those wooden train toys with toddlers often enough to know that a railway with no sidings is in for serious trouble, from head-on collisions to someone getting angry enough to destroy the whole set-up.

Then there is the countryside, with a bit of highway. My favorite part here is that bus, which makes my own attempts at a city bus look juvenile. And check out those sheep! That is one huge flock.

Did I mention it moves and makes noise? Watch the video!

3 comments on “Chugga chugga choo choo! All aboard this awesome LEGO train display!”