Post-apocalyptic builds are popular in the LEGO community for some reason. Is it because we are fatalistic about the fate of society, and are certain it is all going to go up in mushroom clouds? Is it because we play video games that are set in a post-nuclear apocalyptic world? Do we just want to watch the world burn? Perhaps it is some combination of all those. hellboy.lego brings us a scene from the video game Fallout 4, which at very least satisfies my second suggestion. The Starlight Theatre, a now decrepit drive-in movie theater, serves as the camp for some raiders, and is gloriously derelict. Vines and trees are growing up everywhere, and the buildings are all half-ruined. 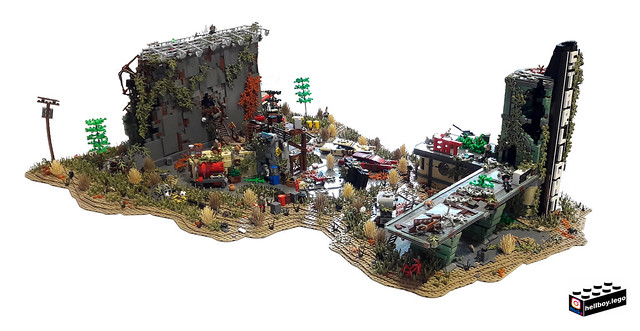 The different textures of disrepair are highly effective, with the lights above the screen all askew, and the brown mixed into the dark grey of the screen giving the impression of rust. I love the hole going into the screen, too, where presumably some of the raiders live. Abandoned bicycles and rusted out cars give a lovely lived-in feel, too. I’m not sure when Fallout 4 takes place, but it seems like the nuclear apocalypse must have taken place soon after the 1950s, since the cars have giant fins on the back. Bits from some Cars sets add some fun details, like the Radiator Springs sign and the Tow Mater box. In fact, there are many such delights hidden throughout the display. 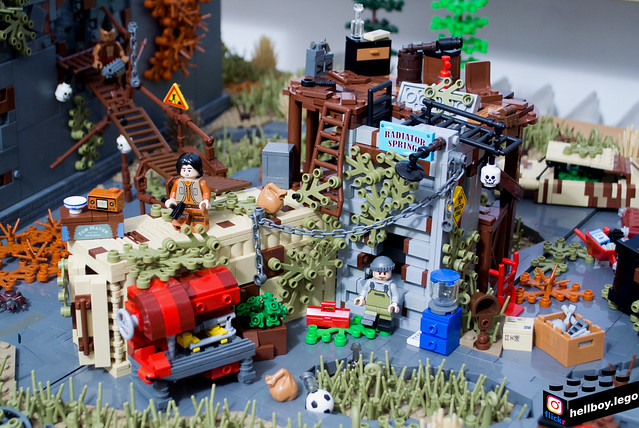 The rear of the screen reveals some slick lettering with a half-stud offset, which complements the vertical lettering at the entrance. This is one nice-looking post-nuclear-apocalyptic world! 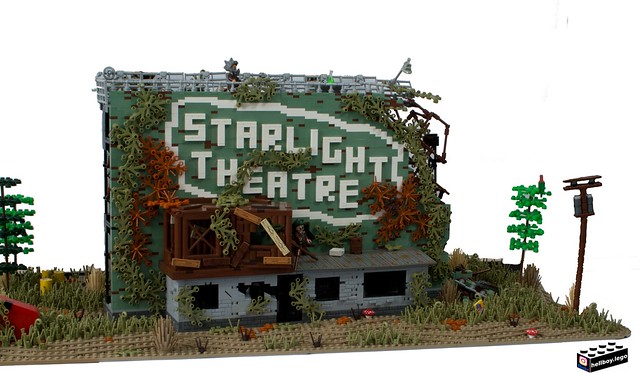