To be sure, there is a motorcycle culture and as anti-establishment as they seem to be, they follow a certain set of rules. The trike is sort of a fringe entity, a head-scratcher, among a group who are already on the fringes themselves. Similarly, there is also a car culture. They may appear to be counterculture but a car enthusiast putting boatloads of time and money into a showstopping “trailer queen” has sort of become “The Establishment.” Enter the rat rod. This is a growling, filthy punk of a car born to flip the proverbial bird at the established norms. You’d want a tetanus shot just to look at one in person, let alone sit in one. What’s great is, with very little money and found parts, they also steal attention, and often top prizes away from the expensive showstoppers. With this in mind, here’s Pat Lacroix’s Rat Trike. 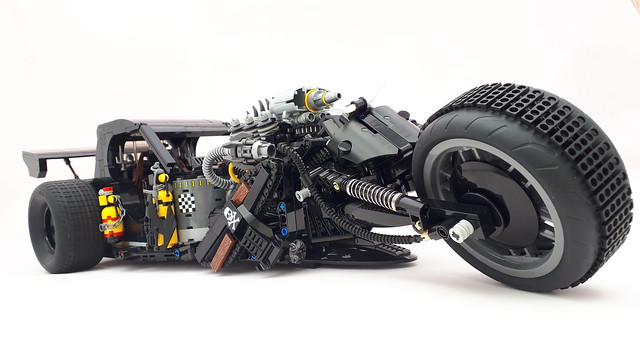 Its very existence is an anomaly. It has a trike configuration, yet you sit in it and steer it as you would a car. Safety and practicality mean nothing with this rat trike, as the engine and front tire obstructs the view from the front windshield. Speaking of front tire, you’re looking at two massive street bikes tires laid side-by-side, but a strip of link treads cleverly gives the illusion that it is one fat tire. The rear tires are pretty pricey but are like gifts from the LEGO automotive gods once you get your hands on a few of them. Liberal use of the skull-and-crossbones logo and other stickers make this one badass ride! 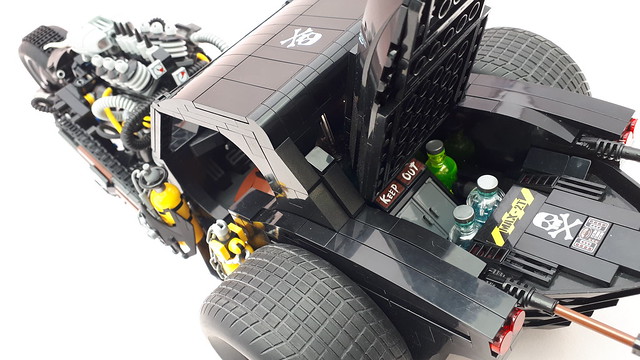 Here is a rear view with the trunk open and a different view of the engine. The contents of the trunk and the engine look like something out of Dr. Frankenstein’s laboratory rather than what you’d find in a regular car. I think we’ve established already, with the title alone, that there just isn’t anything regular about this rat monster. I approve!