In many fantasy tropes there’s that moment where the heroes gather to set off on their grand adventure. Maybe it’s in a tavern, maybe it’s the king’s audience chamber. Sometimes it’s in a mystic glade or just a chance encounter. If you’ve seen this scene once, you’ve seen them all. However, what you might not have noticed was the world happening around the heroes. There are common folk who exist outside of the main narrative, living their fantasy lives as best they can. ‘Sergeant Chipmunk’ brings us a LEGO moment in time that captures the momentous as well as the mundane. 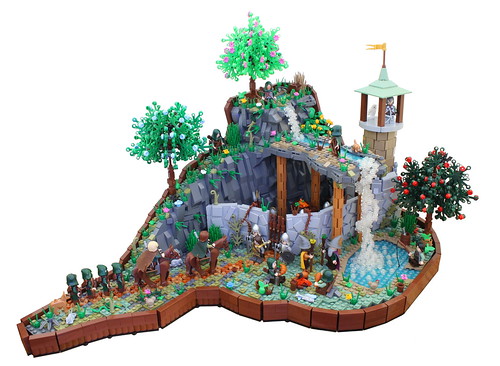 In Unlikely Companions, forestmen, soldiers, and wizards convene at a northern outpost before setting out. The heroes are easy to spot – a knight with gold armor and sword, mounted rangers, and grey-hatted magic users. But the outpost is also populated by common soldiers….the Castle equivalent of Emmet; they are heroes just waiting for a better casting call.

The build for this scene is full of great details. Beyond the path leading to the meeting area there’s a diverted waterfall, cooking pit, garrison and a tower. Critters abound, creating a seek-and-find for fish, spiders, dogs, cats, owls, snakes, and at least two chickens.

The building techniques in play are top-notch. The irregularly-shaped base complements the interesting texture of the cliff face. The trees have a complex connection allowing for vertical placement of the 6×5 leaf elements. What really brings the background to life, though, is the twisting of the transparent-clear plates and 1×1 round elements that make up the waterfall. You really get the feeling this is a moment frozen in time. Hopefully we’ll get to see more of this adventure in the future.