There is something glitzy and glamorous about New York City, shown in countless movies and TV shows and books and magazines and every other form of media through the years, including LEGO sets. Fame and fortune, celebrity status, larger-than-life personalities, all are connected to the Big Apple. Importantly, New York is home to Wall Street, epicenter to the world’s largest financial market, and fortunes are made and lost in moments with bold or rash deals by brokers. If things go well, and a broker gets rich, perhaps starts managing a hedge fund, or otherwise gets a heap of money large enough to make Scrooge McDuck jealous, then he (or she) can afford to buy a condo in 15 Central Park West, built here in 1/650th scale by Spencer_R, the builder of many famous skyscrapers. 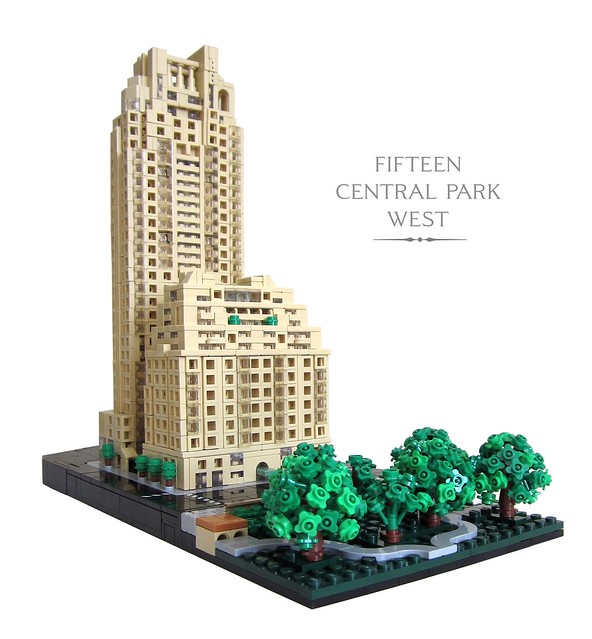 The property was purchased for $401 million, and the total cost of development, including the land, was $950 million, but when they sold the 202 units in the two buildings they went for over $2 billion; that’s about $10 million per condo, for those of you without easy access to calculators or who struggle with mental math (like me). It is one of the most successful real estate ventures in history due to the over billion dollars in profit. It probably helps that it borders Broadway on one side and Central Park on the other. Notable residents, besides those Wall Street hotshots, have included Alex Rodriguez, Robert DiNiro, Sting, and Denzel Washington. Now that is fancy living!

I’m sure Spencer’s version did not quite cost $950 million to make, but he must have spent a bunch of money on tan headlight bricks, since the build features quite a few. The hollow square base and back of that part make for some excellent windows. The stacked 1×2 transparent plates alternating with tan is simple but highly effective at this scale, too. The courtyard is simply constructed, making good use of inset 1×2 grille tiles for the gates and some transparent light blue elements for the glass-bottomed fountain (the pool is underground, lit by the light shining through the fountain, by the way – though Spencer did not build the pool, I don’t think). 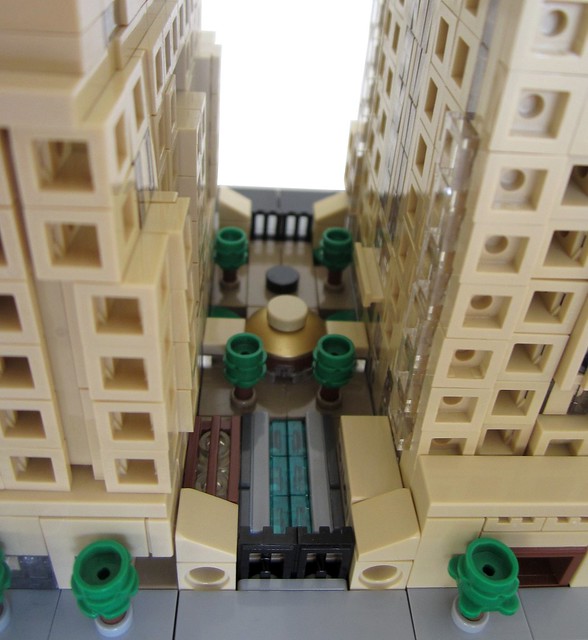 If you love this building and want more, we have previously featured Spencer’s Transamerica Pyramid and a NYC skyline build, as well as the World Trade Center site. We also featured another New York City building, the Hearst Tower, earlier this week, albeit by a different builder.