May the 4th — Star Wars Day. Perfect timing to take an exclusive first look at the new LEGO Star Wars Build Your Own Adventure book. Galactic Missions comes with a new Cloud Car model and Bespin Guard minifigure, and the story is packed with new LEGO Star Wars models and building tips put together by The Brothers Brick’s very own Rod Gillies. The book will be available in August, and can be pre-ordered now from Amazon. 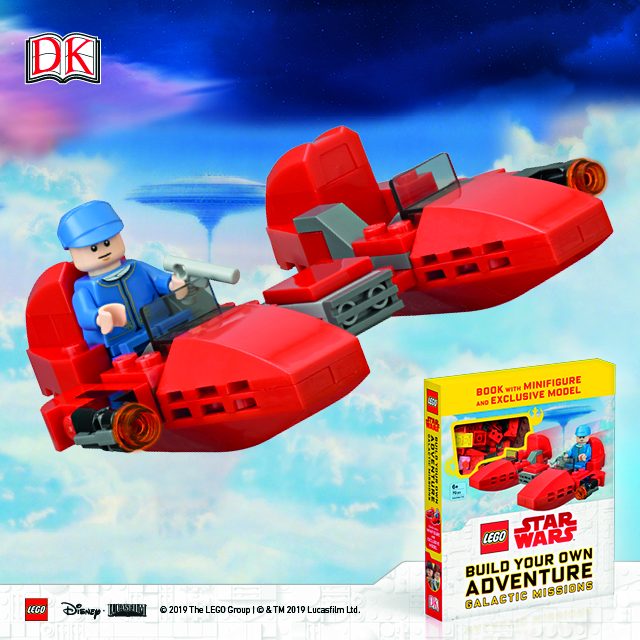 We caught up with Rod to find out more about the new book, and what it’s like for a ‘fan-builder’ to work on a project with the LEGO Star Wars team and book publisher Dorling Kindersley. 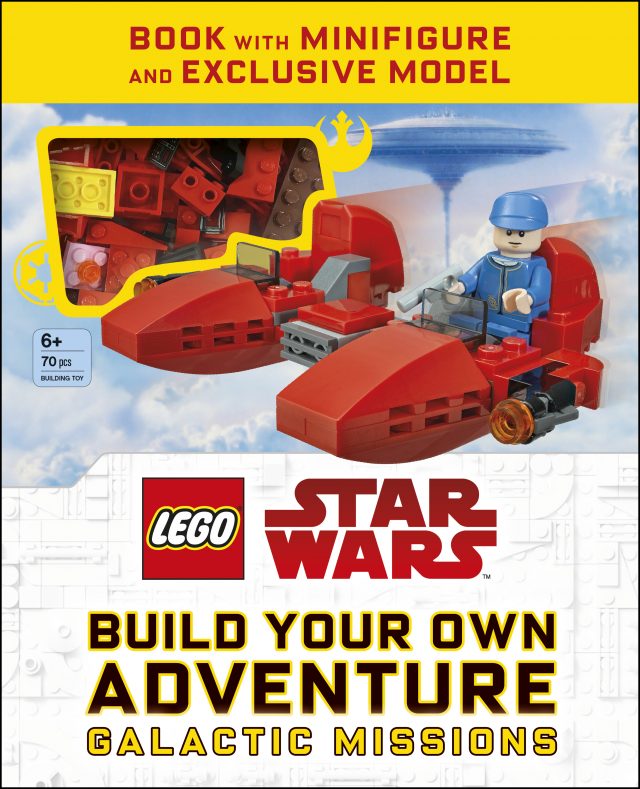 The Brothers Brick: What was it like working on another LEGO Star Wars book, and how is this new one different from the previous titles you’ve worked on?

Rod Gillies: It’s great fun doing these books. I’ve always been a big Star Wars fan, and obviously I also love LEGO. Being asked to do these books represents the perfect centre of the Venn Diagram of my geekery!
This book felt really different from other Star Wars titles I’ve been involved in. The LEGO Star Wars Ideas Book didn’t have an over-arching narrative, and the previous Star Wars BYOA book followed a single character on a mission to different planets. Galactic Missions takes a different approach — it’s a collection of stories about different characters, from different places and eras in the Star Wars universe.
And beyond the story, we’ve done some new things with the models in this book. There are microscale scenes introducing each chapter — something I was really keen to include. Microscale is a great way to build epic Star Wars scenes without needing a massive brick collection. I really hope these models inspire kids to look at their bricks in a new way.

TBB: So where do these Galactic Missions take the reader?

Rod: We visit Naboo during the Trade Federation invasion, see Rey outwit the First Order on Jakku, spend time with young Han Solo on Corellia, tangle with bounty hunters on Bespin, and take a tropical trip to Scarif. It was great to work on such a variety of environments, trying to capture the signature look of each planet in relatively simple models that hopefully inspire kids to build.

TBB: Which was your favourite?

Rod: Probably Scarif. The tropical island feel is something genuinely different in look for Star Wars. And turning it into an Imperial Holiday Resort appealed to my sense of humour. There are some cool models in that section, including a Y-Wing Submarine. And just wait until you see what Darth Vader is up to! When we come up with some of the funnier ideas I sometimes wonder if LEGO and Disney/Lucasfilm will actually approve them — but they’ve been really happy to let us have some fun with things. 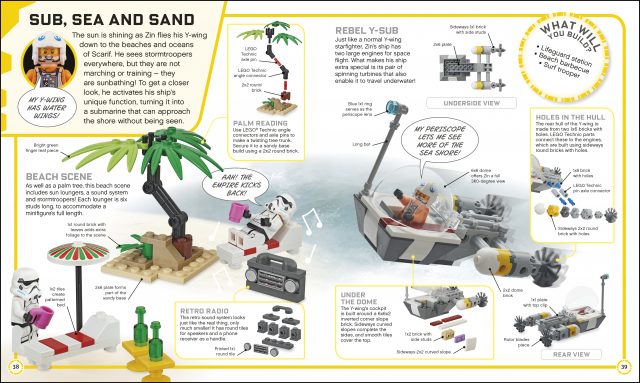 TBB: And what was the most challenging section to work on?

Rod: That would be Corellia. We were coming up with the story for the book, and I had started building models, before Solo had even been released. I’d had to sign an NDA (Non-Disclosure Agreement) before starting on the book, but even then, the guys from the LEGO Star Wars design team were very careful not to give anything away about what was coming. All they could really give me was rough ideas and colour suggestions for the scenery elements. Luckily I was sent a couple of the Solo sets just prior to their release, so I could build vehicles etc in the style of the movie. I’m particularly pleased with the two Corellian speeders you can see in the spreads below — I was trying to give them the striped styling and colouring seen on Corellian spaceships in many of the Star Wars movies and games. 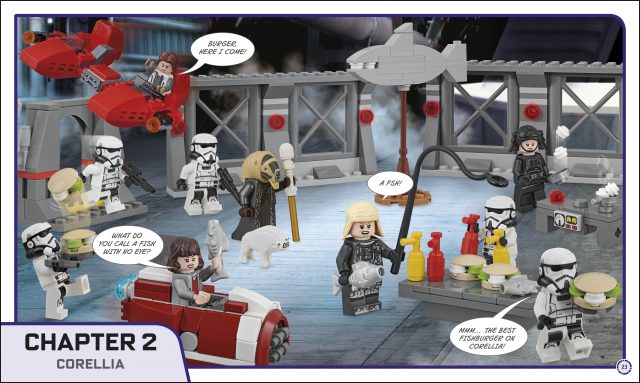 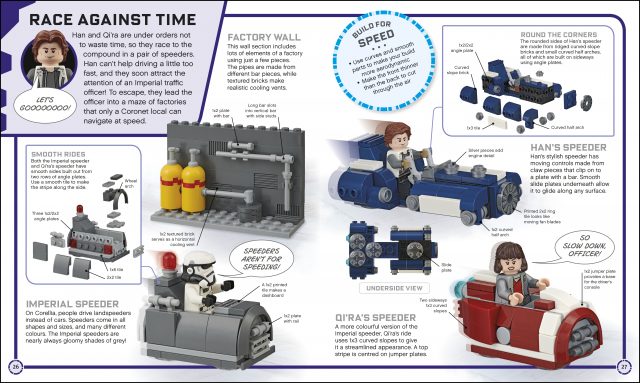 TBB: How long does the creative process take on one of these books? When do you start building?

Rod: The initial discussions happen about 18 months before publication. The guys at Dorling Kindersley will come up with an initial plot synopsis, which we’ll kick around. I might make model suggestions which could affect the story, changes which in turn can prompt more model ideas. I’ll complete a series of sketches of what I’m thinking about rather than building anything at this stage. The plot synopsis and model ideas then need to be approved by LEGO and Disney/Lucasfilm. Once we’ve got that sign-off I’ll get to work.
The building process usually takes about two months, and then it’s the dreaded Model Review! This is where the LEGO Star Wars design team and some of the model coaches will take a good look at the things I’ve built — checking the building techniques and solidity, the fit with Star Wars, and that they’re not too complex to inspire kids to build their own versions. It’s a nerve-wracking meeting! After that, there’s invariably another month of tweaks and changes, and then all the models go off to Dorling Kindersley for photography. My work is done, and 6-9 months later the book gets published.

Here’s an example of the process on two models from the Scarif section of the book — my initial sketches, and the final models. Whilst my drawings are clearly terrible, and the details will change during the building and review process, the sketches are really useful, allowing us to talk about ideas at an early stage… 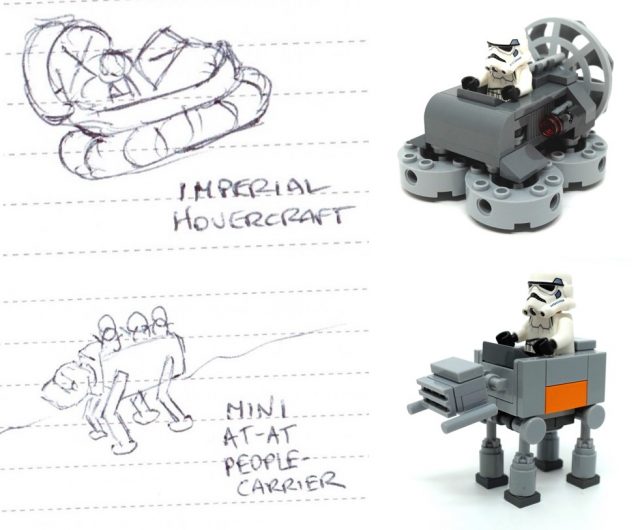 TBB: Those are nice little Imperial vehicles! Are the LEGO Star Wars team happy for you to come up with new things like the hovercraft?

Rod: Yes. They’ve always been really open to things like this. It’s always surprising how willing they are to have some fun with such a tightly-managed license. As long as what we suggest fits the universe, and looks the part, they’ve been okay with us introducing vehicles or spaceships that haven’t been seen before in Star Wars. The mining pod from the Bespin spread below, and the multi-wheeled First Order vehicle on Jakku, are good examples of this… 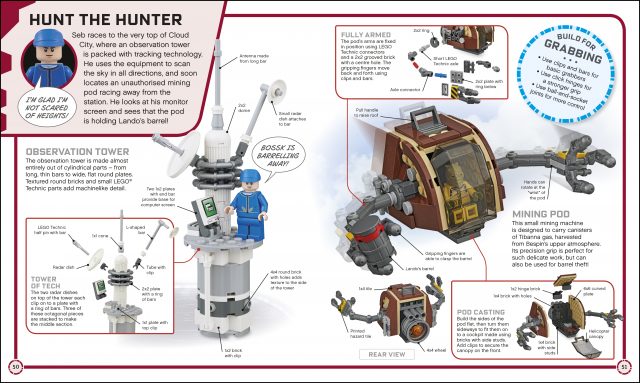 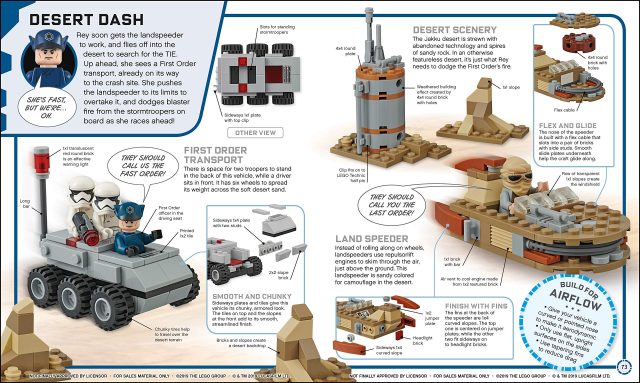 TBB: Sounds like you’ve enjoyed yourself working on this book. Are there more Build Your Own Adventure titles in the works?

Rod: I loved working on this book — it was a blast. And I’ve just started work on some new stuff with Dorling Kindersley for publication next year. I could tell you what it is, but then the terms of the NDA say I’d have to kill you. Sorry!

LEGO Star Wars Build Your Own Adventure Galactic Missions will be available in August, and can be pre-ordered now from Amazon.