What’s a city layout without the staple vehicles: police, fire, ambulance, bus, delivery, mail, garbage? You gotta have them all! LEGO has released a few generic garbage/recycling trucks, but none of them are this cool. At first glance this build by Scott Hasse looks a bit like an average set. But up close it’s pretty nifty. Rather than the typical manual dump action displayed in the City line, you get a truck that works much more like the ones you see on the street in real life. 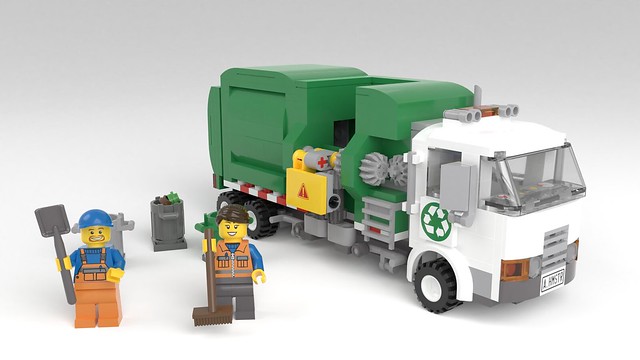 A simple turn of the knobs not only grabs and dumps the bins, but also compacts the refuse into the dump collection in the back. The whole thing is really smooth and works like a charm! An if you had a fleet, you could put tiles on the sides to indicate garbage vs. recycling or compost. Would anyone else besides me get hours of entertainment from playing with this thing? My next step would be to motorize it!

This could become a real set one day, you never know. But in the meantime, you can use some simple instructions to build your own little garbage truck.