Years after being discontiniued, Bionicle remains a strong and very much autonomous theme in LEGO fan builds. Unique pieces and almost complete freedom of angles set it apart from most other styles, but was it always so? Jayfa and Andrew Steele bring us back to 2002, a time when Bionicle was still searching for an identity and was for the most part a sub-theme to Technic. The glorious titan set Cahdok and Gahdok was a load of gears, rubber bands, liftarms and most importantly, play features. I do not think this re-imagining has much of those, but it does capture the spirit of the Bohrok queens.

Jayfa’s and Andrew’s Cahdok and Gahdok are very true to their source, but what I find the most impressive is how consistent the two builders made them. There is a bit of unique style in both of them while still giving the appearance like they came from the same universe. The flowing curves are a stark contrast to the official set, and yet they look incredibly natural. The purple and turquoise hoses under the neck and tail are reminiscent of the Competition theme which has a lot of parallels with early Bionicle play functions and this set in particular.

Gahdok has an interesting little detail that I am particularly in love with (besides all sorts of little mechanical bits on the legs) – the hips have red Bohrok shields taken directly from the official set, possibly as a nod to the original design. 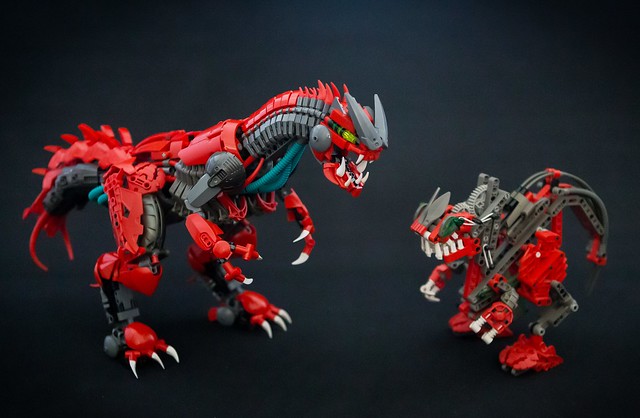 It is interesting how Jayfa changed the colour scheme of Cahdok. It looks interesting and is probably beter overall, but one could understand that the original set was made with recombination in mind.