LEGO seldom makes changes to their sets once they’re already in production, but it does happen from time to time, usually to correct a section of a model that’s discovered to be too fragile for play. However, the most recent case is an oddity even in this rare class of updated sets. Nearly a year after its release, set 75188 Resistance Bomber has been updated with a minifigure swapout, changing one of the pilots from a generic “Resistance Bomber Pilot” figure to Finch Dallow, a named minifigure sporting a new head and helmet. So, why did Finch Dallow suddenly become important? 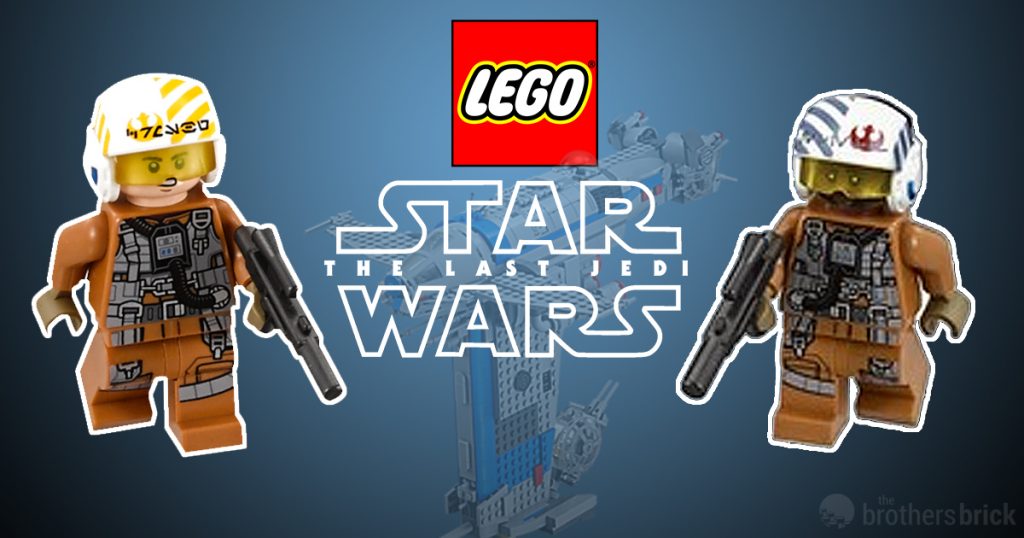 Who is Finch Dallow, why is he important in the scheme of things?

Finch Dallow was the last standing pilot of the Resistance bomber fleet that took down the Fulminatrix (Dreadnaught) in the opening sequence of The Last Jedi. He appears on-screen for less than 5 seconds in total, but it’s a significant scene, with Finch’s final bomber taking the Dreadnaught down. 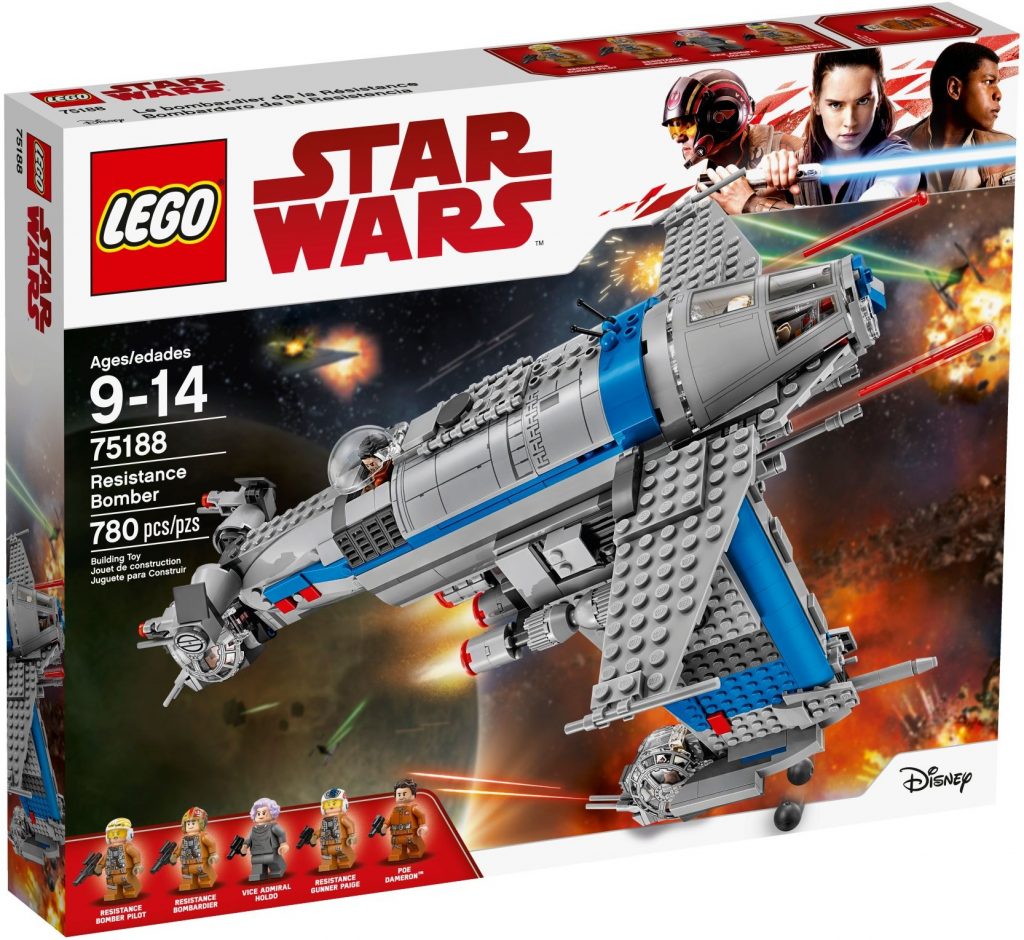 If Finch wasn’t named in the film credits, how was he identified as the pilot?

Black British actor Kevin Layne, who played the character in Star Wars: The Last Jedi, was simply credited in the film as “Resistance Bomber Pilot #1.” Finch was first named in The Last Jedi: Cobalt Squadron novel, which covers more about Rose and Paige Tico’s adventures and is a storyline that is a canon in the Star Wars universe. 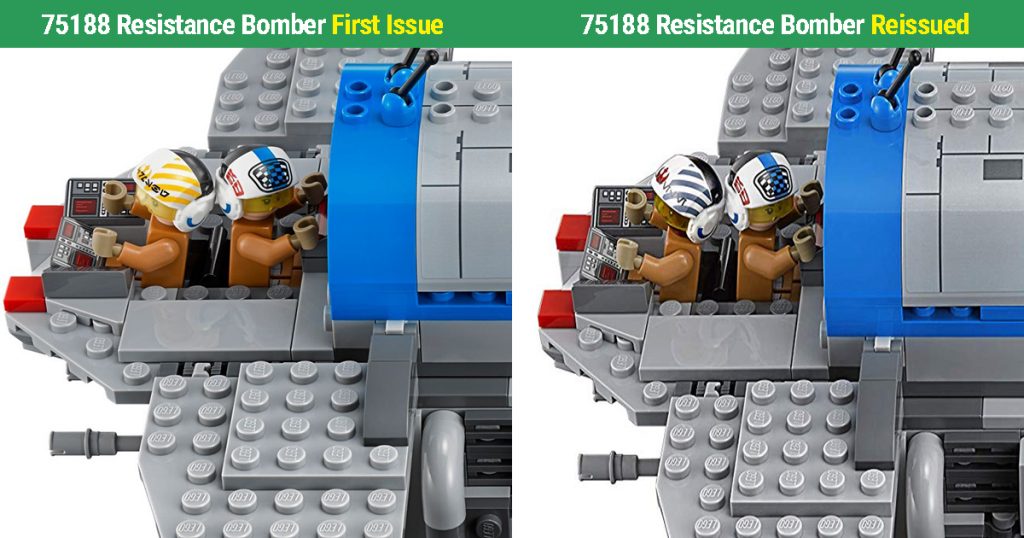 How could have LEGO made that mistake?

It is likely that LEGO wanted to be film accurate with the minifigures for this set, especially given that the character’s skin tone and that of the generic minifigure didn’t match. It’s well known that LEGO designers do not get full details during their design phase, and only partial shots or stills of the movie to work with. With new Star Wars films in particular, there’s an unusually high level of secrecy, so sometimes the designers are working with even less–sometimes rough concept art or pre-production images of things that may change in the final sequence. The scenes in The Last Jedi are rushed and even as I researched to write this article, it was easy to miss who’s who in the bigger scheme of things. After noticing the minifigure update, LEGO fan Piers Jon wrote to LEGO and received this response:

“When we develop LEGO sets based on movies, we aspire to make minifigures and models that reflect the iconic characters and scenes in the film. For this reason our products are most often developed by LEGO designers using reference material from specific movies – still images, sketches, as well as in the actual movies as inspiration. We developed The Lego Star Wars Resistance Bomber set (75188), based on “The Last Jedi” movie and discovered after the film was released that one of The Lego minifigures in the set doesn’t reflect the movie scene properly. As a result, we decided to adjust the set accordingly, true to our motto: “Only the best is good enough”. We hope Star Wars fans across the world appreciate this attention to details” 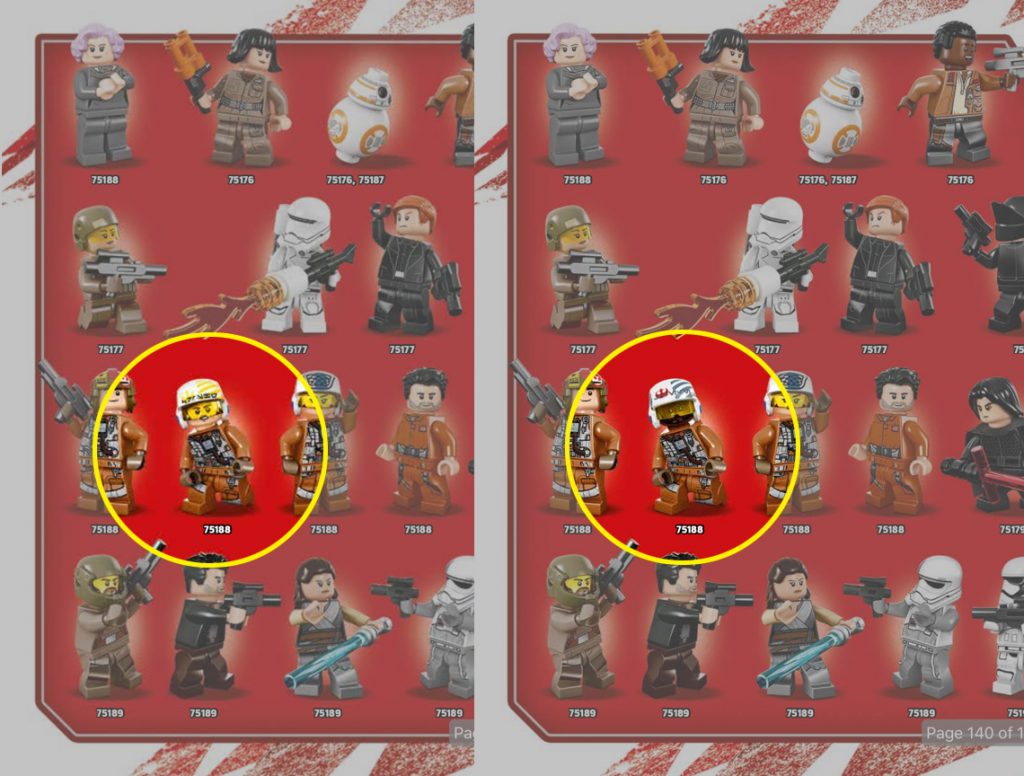 To understand the significance and importance of this minifigure, let’s look at the scene. Each Resistance Bomber has a crew of three: the Pilot (Finch Dallow), the Gunner (Paige Tico) and the Bombardier (Nix Jerd). Everyone remembers Paige, Rose’s sister who has the suspenseful scene in which she releases the bombs.

Nix never had a scene with a spoken role, though we hear his name called out by Paige when he was already dead.

Nix, barely visible at the top of the platform

Finch, however, has his 5 seconds of fame. He first appears in the scene right after Blue Leader piloting an A-Wing, in which Tallie says “Bombers, keep that tight formation. Fighters protect the bombers. It’s not every day we get a shot at a dreadnought, so let’s make this count!”

At exactly 7 minutes and 59 seconds into the movie, Finch responds with “Copy that, Blue Leader,” and as the scene pans off, we hear his voice from off-screen saying “You get us there, we’ll give it to ‘em!”

At 10 minutes and 4 seconds, we see him for a fraction of a second screaming “Look out!” before his demise from the attack blast of a TIE fighter. It’s an emotional scene in the movie, since these are some of the first characters the film follows.

What changed in the set?

The outer box art, the manual insert, and two printed elements have changed in the set. We’ve seen photos (but don’t have a great clear photo of it just yet) of a new printed box swapping the image and name in the minifigure lineup. On the inside, changes only occurred for two parts, which are the printed helmet and the newly printed minifigure headpiece. Obviously, a reprint of the manual is required for a number of pages. The helmet element 6200971 is replaced with 6252047 and the headpiece 6200960 is replaced with 6252065. Since the old versions of both the head and helmet were only used in the generic bomber pilot figure from this set, they appear to be out of production now. 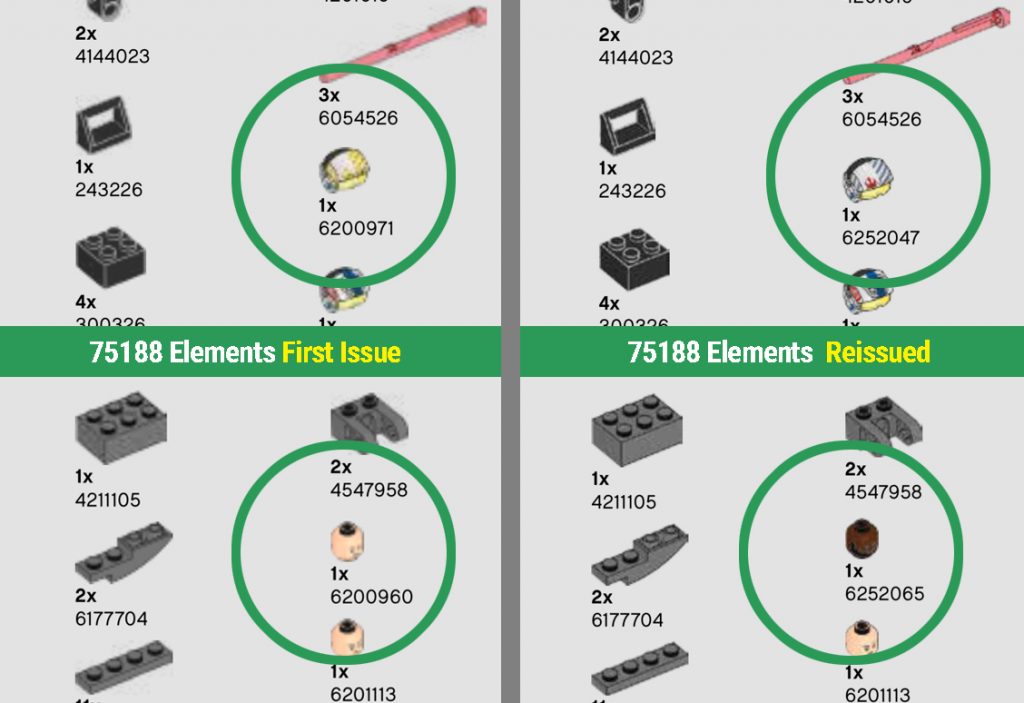 When was the change?

While it’s not clear precisely when LEGO made this change (they certainly didn’t announce it), the earliest indication of this getting out into the wild is from late November 2018 when Finch’s actor Kevin Layne shared an Instagram post. Kevin received the new minifigure directly from LEGO, so it’s logical to assume that he’s been aware of this all along. Given the long lead times in the packaging process, the actual decision from LEGO and manufacturing must have taken place months before. Perhaps Kevin was the one who spurred LEGO to make the update.

We can definitely feel and understand Kevin’s excitement. Who wouldn’t be over the moon to be featured as a minifigure? The statement of “Ltd Edition,” however, is hard to define. It’s limited for sure, but then again, isn’t every single LEGO set and figure out there limited? They all eventually become sold out. In fairness though, it may be harder to source this particular revision since some retailers have already stopped carrying the set, let alone getting in new stocks from LEGO. 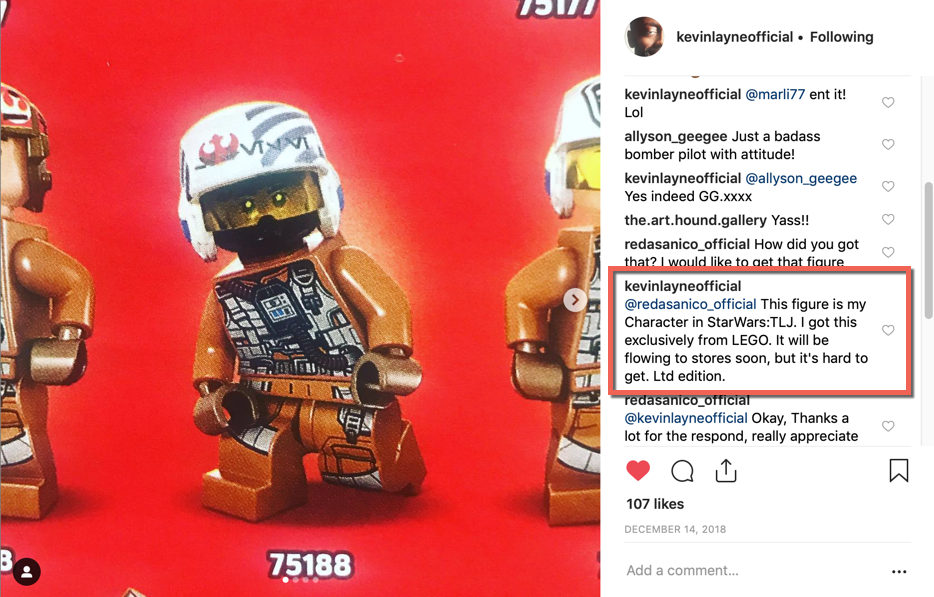 What’s written on the helmets of each figure?

Written in the Star Wars language Aurabesh, the generic pilot’s helmet translates to CRMSBG, while Finch’s says STEIE. Aurabesh lettering in LEGO sets usually translates to something meaningful, even if it’s just something simple or a clever easter egg. The meaning here isn’t obvious, though. If any sleuthing fans out there can tell us something more, let us know in the comments. 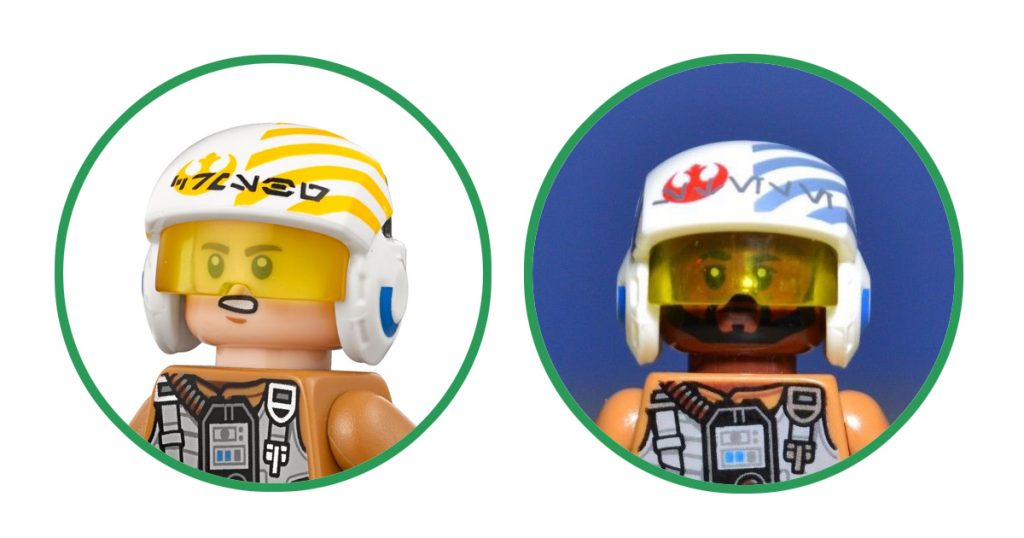 Where can I get one of the new printed pieces?

We’ve seen many instances of the reissue sets cropping up, but getting your hands Finch may prove tricky short of simply going on eBay or Bricklink and paying a huge collector markup. Ordering the full set online (including at a discount, as in the US and Canada at the time of writing) will be hit-and-miss as to which version you’re going to get. The only sure way to tell is to buy from a savvy seller who can verify the version (something LEGO and other major retailers are unlikely to do) or to find the updated version for yourself in a store.

With most previous set updates, LEGO has been happy to provide the updated elements to fans who already own a set and request the update. However, in this case we’ve seen reports of mixed success talking to customer service via phone or chat, with LEGO sometimes refusing to provide the new elements. Fans in countries with LEGO Shop Online Bricks & Pieces program have had varied success ordering the individual parts via that method. Last but not least, for countries without the official LEGO online stores, you could write to LEGO Support and we’ve seen reports of some success with that approach. 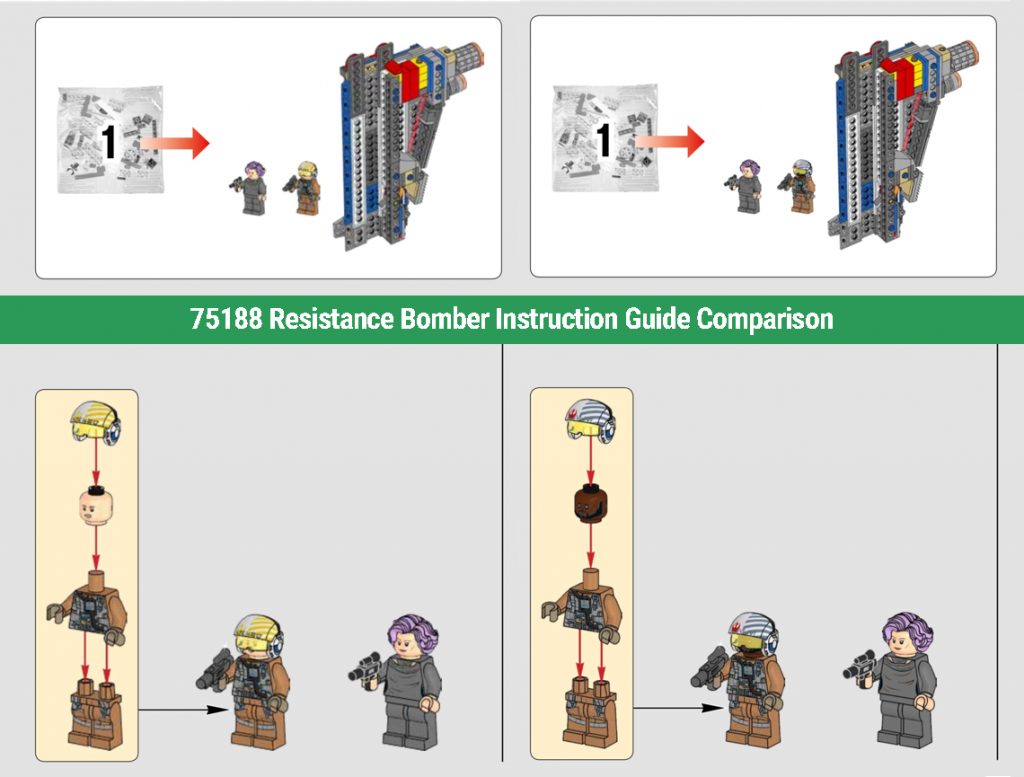 This isn’t the first time this happened, right?

As we mentioned at the outset, redesigned sets do happen, and perhaps more frequently than you’d expect. There are many ways that LEGO addresses the issue. Sets have been reissued with totally different numbers like the Shuttle Adventure 10213 and Shuttle Expedition 10231. In that case, owners of the original version were provided an update in the form of a Supplemental Pack. Other times LEGO never acknowledges the issue at all and simply makes a quiet update, such as with 75053 The Ghost, where Kanan Jarrus’s headpiece was changed to a dark brown instead of black during a production run. When opening that set, you may end up with one or the either without any indications on the box. 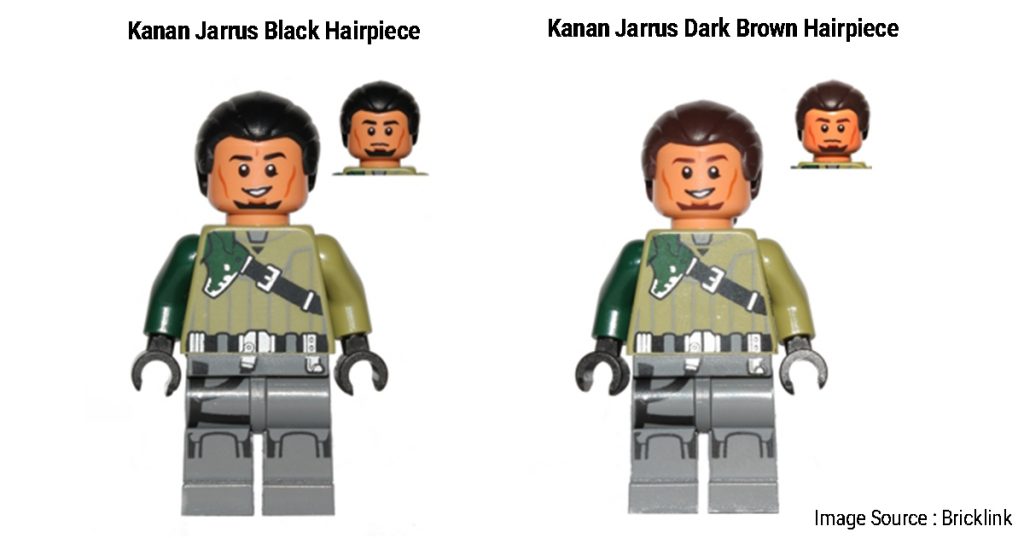 It’s great to see Kevin Layne get his character’s minifigure and we applaud the change and recognition for his importance in the movie. However, while we can understand that many LEGO Star Wars fans are first and foremost minifigure collectors — and collecting one of each unique figure is an important piece of the hobby — we think that the frenzy we’ve observed in some collecting circles is overblown. That hype is definitely reflected in the secondary prices — the Finch minifigure has been selling for well over $100 in recent weeks. The process of change is not something new, and it is a cost and manufacturing decision to eventually decide how much is going to be changed during a production run, be it just a element swap without notification or a full reprinting of the box art and instruction booklets.

But one thing is sure: LEGO isn’t doing this simply to create scarcity. The fact that this set is no longer on shelves in some regions just makes it a little more in demand. The fear of missing out and the ease of sharing and spreading news on social media has just made it exponentially more visible than this change might otherwise have been. Then again, that is also a great part about what keeps the LEGO fan community active and alive with such strong passion, and we count ourselves among the most enthusiastic members of this great community.