For decades, the Long Island-based Grumman Corporation was the US Navy’s primary aircraft supplier. They built a range of now-famous aircraft, including the Wildcat, Avenger, Hellcat, Cougar and, of course, the Tomcat. Starting in the early seventies, they also built the EA-6B Prowler; a four-seat electronic warfare aircraft for jamming enemy air defenses. I’ve had a model of one of these since 2007. In recent days I rebuilt it using new parts and techniques. Thanks to curved slopes and a lot more sideways building, I’ve been able to improve the shape. 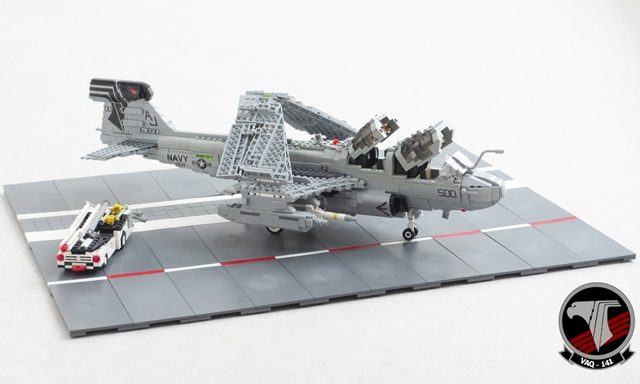 Prowlers entered US Navy service in 1971 and, after a career of more than 40 years, the US Marines have only just retired their last examples. Their longevity is a testament to the quality of the design. Because its products were famously well engineered, Grumman was also known as the “Iron Works”. Their aircraft, however, aren’t exactly famous for their elegant looks. Even the Tomcat, arguably one of the prettiest fighters ever to grace an aircraft carrier’s deck and certainly one of the company’s prettier products, looks quite ungainly from some angles. Also known as the “flying drumstick”, the Prowler is no exception. It has a fairly large front end, which houses two separate cockpits, each with side-by-side seating for two crewmen. The large “football” on top of the vertical fin contains jamming equipment, as do wing-mounted pods. The wings fold up for use aboard aircraft carriers. For air-to-air refuelling, it has an oddly-cranked probe just in front of the windscreen. It all makes sense, but it’s not pretty. I think “purposeful” is more appropriate.

5 comments on “Behold the purposeful lines of the pugnacious Prowler”