Back in 2013 Tyler Clites contributed a fantastic tutorial to the Brothers Brick on how to photograph your LEGO creations; and his latest creation proves once again that not only is he one of the LEGO community’s most talented builders, he’s also a master at presenting his work. Of course the featured spaceship has all the hallmarks you’d expect from Tyler: nice piece usage throughout, wonderfully shaped engines, and appealing splashes of colour for detail. However, as he notes, he wanted more for this craft than a shot of it flying through space. With a repurposed rock base, and the creation of some creepy bug aliens, we now have a story to be told. Hunkered down for repairs in the middle of nowhere, the ship’s auto turrets save the day. Mix in ace lighting effects and a swirling mist, courtesy of a vape pen, and you have what I have previously written about, the perfect marriage between LEGO and photography. 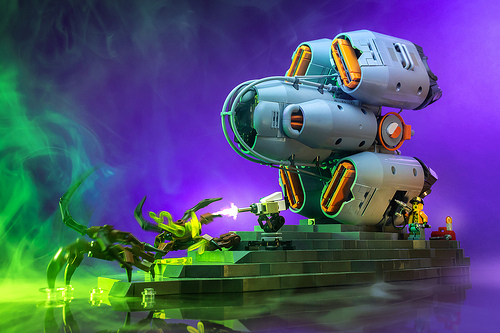