One of the most fun games I play with friends is Tom Clancy’s Rainbow Six Siege, a tactical multiplayer game of attack and defend resolving bomb defusal or hostage situations. In the attack phase, I like playing as French GIGN operator Twitch, who is equipped with her own hand-crafted camera drone outfitted with a taser. To show some love for this game, I built the Shock Drone with LEGO in 1:1 scale. 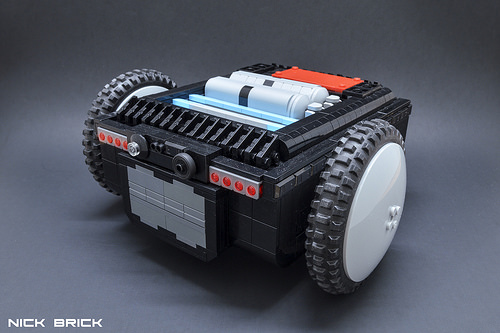 The bulky design of the Shock Drone compared to other operators’ standard camera drones allowed enough room internally for Power Functions. Each front wheel is powered by a motor and controlled by SBrick, which, just like in Siege, allows me to control the drone with my phone. You can see it in action, as well as a glimpse at the internals and a gameplay comparison for those unfamiliar with Siege, in the video below.