Every October since 2009, Toys R Us sold exclusive LEGO sets, issued throughout the month. This year, in some parts of Asia where Toys R Us (TRU) stores are still open, the “Bricktober” offerings remain available, but due to TRU closing in the US, American LEGO collectors have been left wondering where these may show up instead. This particular set of four Harry Potter minifigures are available to our Stateside readers at Barnes and Noble. 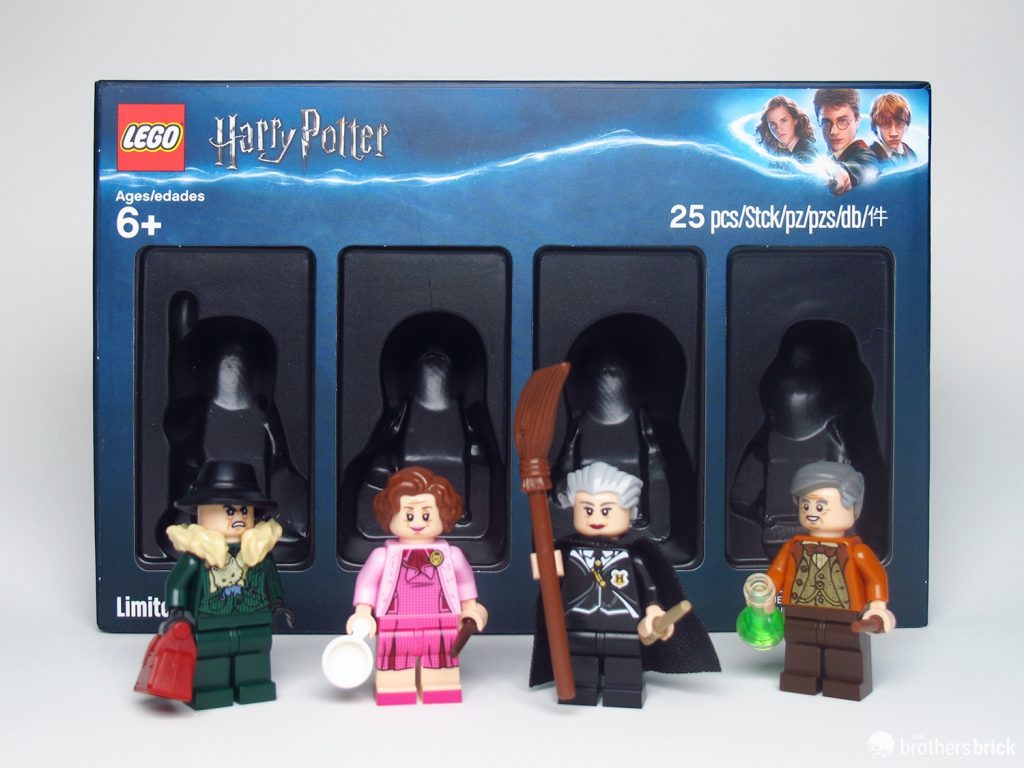 We got our hands on these from Toys R Us in Asia. Let’s take a closer look at the four exclusive minifigure characters for the 2nd week of “Bricktober.”

First up, we have Rolanda Hooch whom you may remember as the Quidditch match referee. This is her third appearance in minifigure form. The first release was in Qudditch Practice [4726] back when LEGO minifigures for licensed themes featured yellow skin tones. The more recent minifigure release was from Quidditch Match [4737], featuring light flesh skin tones. This Bricktober version is very similar to the last version in terms of overall look. She has the same hairpiece with only an updated version of her robe-like outfit. 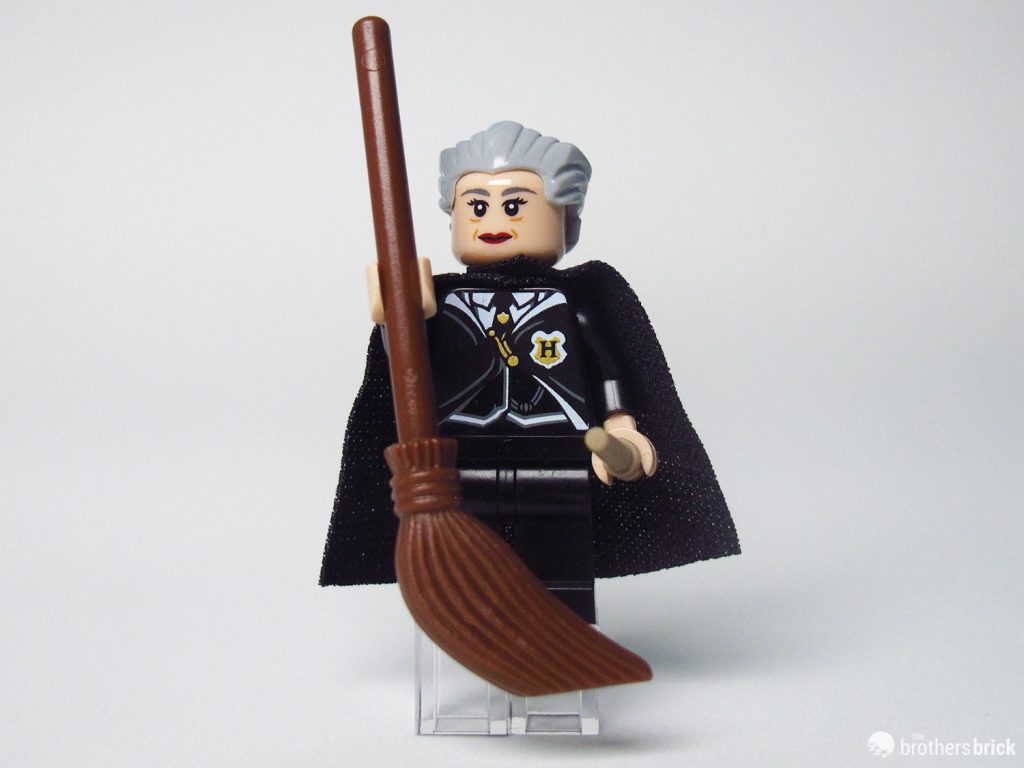 Her face print is updated to feature a smile and an alternate face print features her with her goggles on. She carries a broom as an accessory in one hand and a wand in the other. The wand — unlike the recent LEGO sets and Harry Potter collectible minifigures does not come with the sprue intact with an extra wand, but only a single piece held by the minifigure. 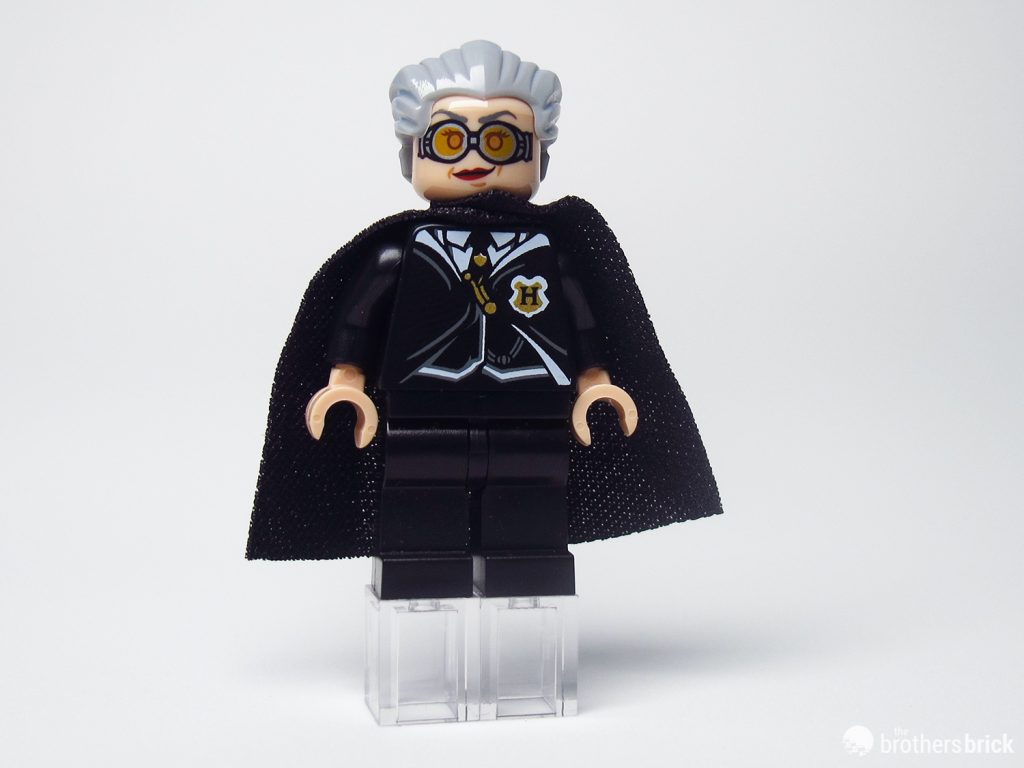 The back of the torso features her waistline and a simple finishing of her outfit with lines printed across the hips and neck. The leg pieces are totally void of any print. 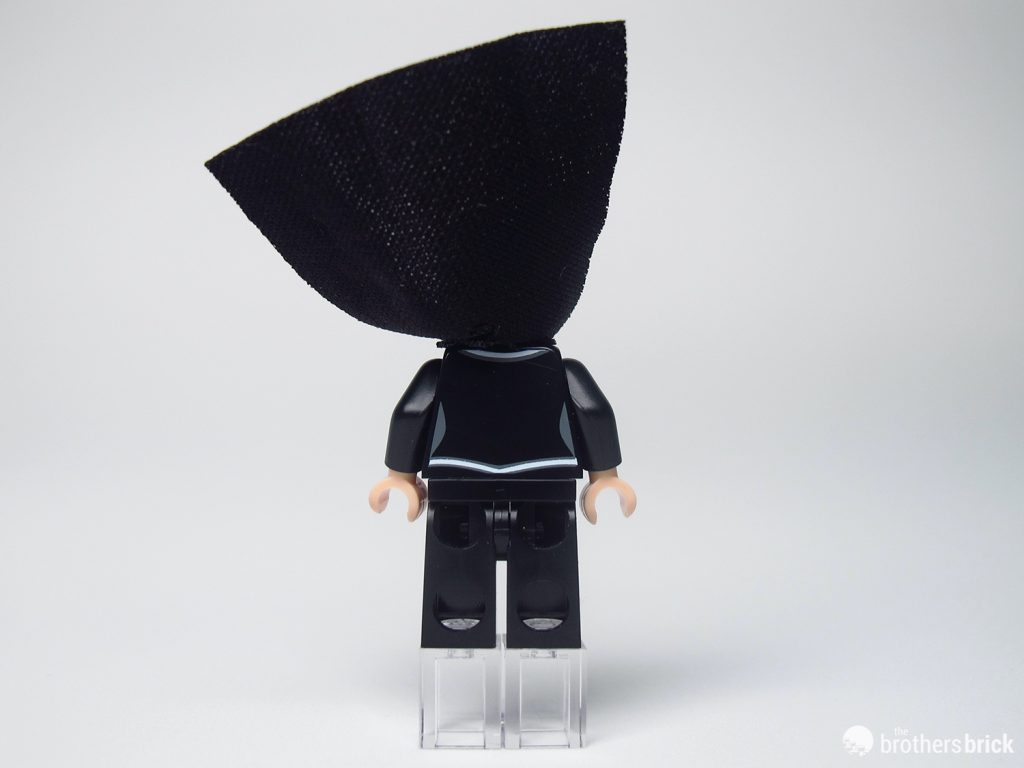 This is Horace Slughorn’s first appearance as a minifigure in the LEGO Universe. As the potions master, he sports an Erlenmeyer Flask with Trans-Neon Green Fluid and a wand. He has greying hair together with a bowtie and a tweed waistcoat, very much like his character in the movies. 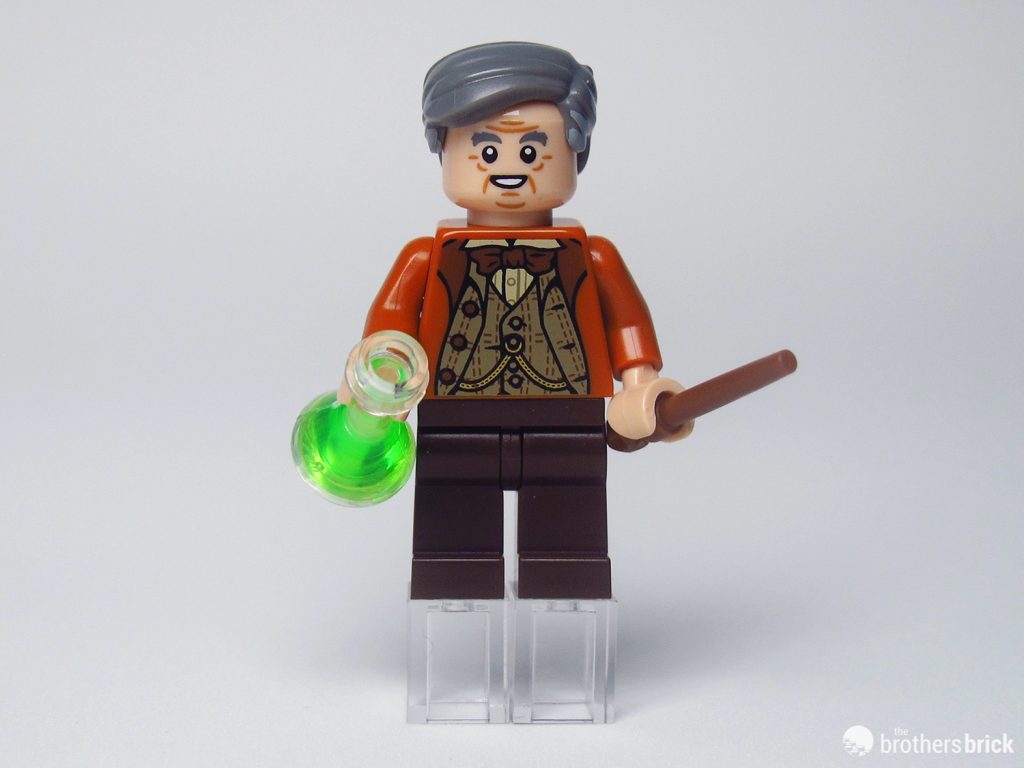 The back of the torso has printed buttons from the coat he wears. Once again the legs are void of any printing. Horace has a second face print with a slightly worried or tense look. 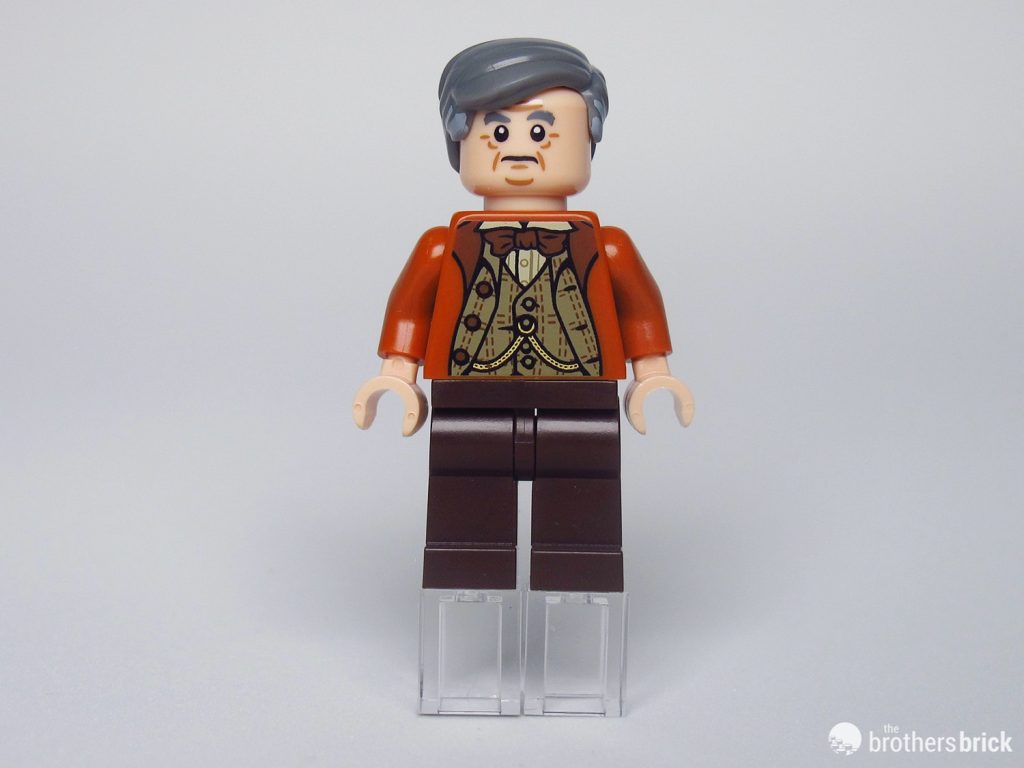 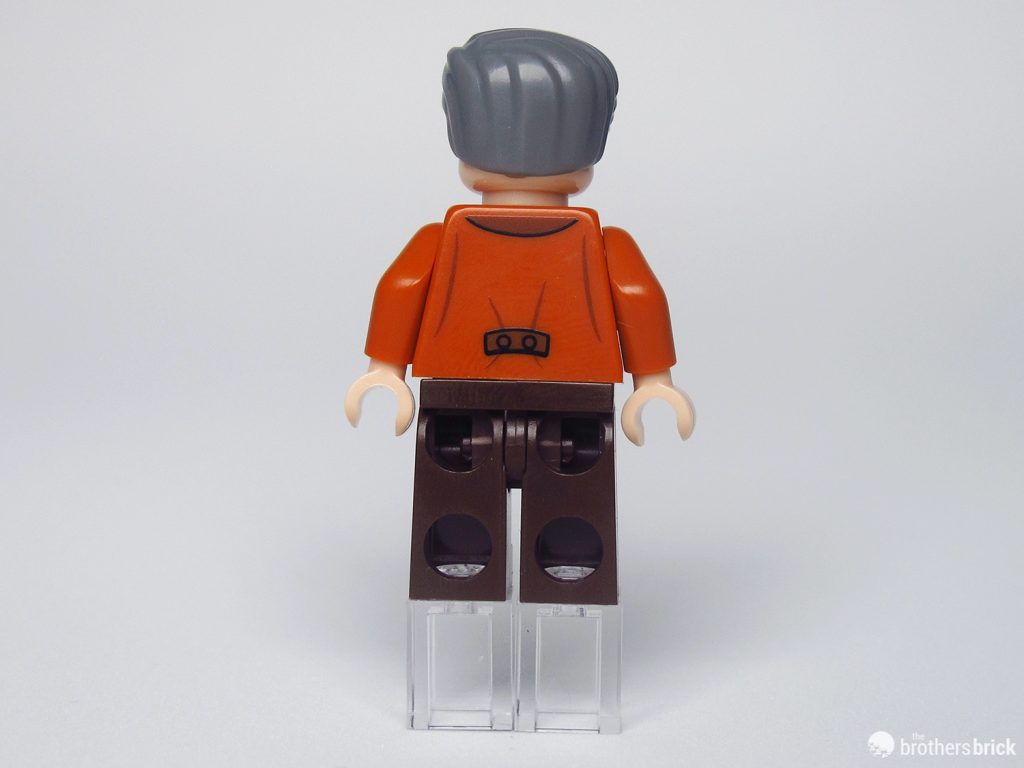 Dolores Umbridge makes here second appearance as a LEGO minifigure with this release. Her last appearance was back in 2007 from the Hogwarts Castle [5378] and fetches quite a hefty price on Bricklink. This new edition is certainly a great improvement with a new hairpiece and more detailed prints on both her torso and legs. 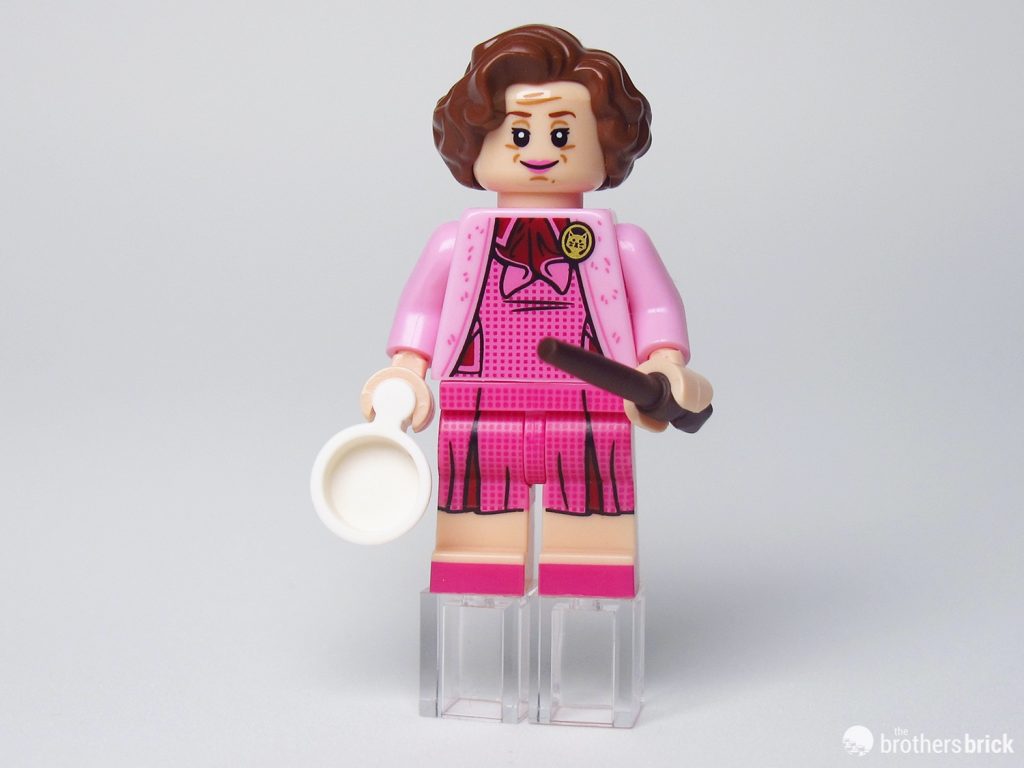 Umbridge has a dual face print — a smile and an angry or evil-looking sneer. I do however prefer her previous minfigure face as I think it represents her nasty character much better. 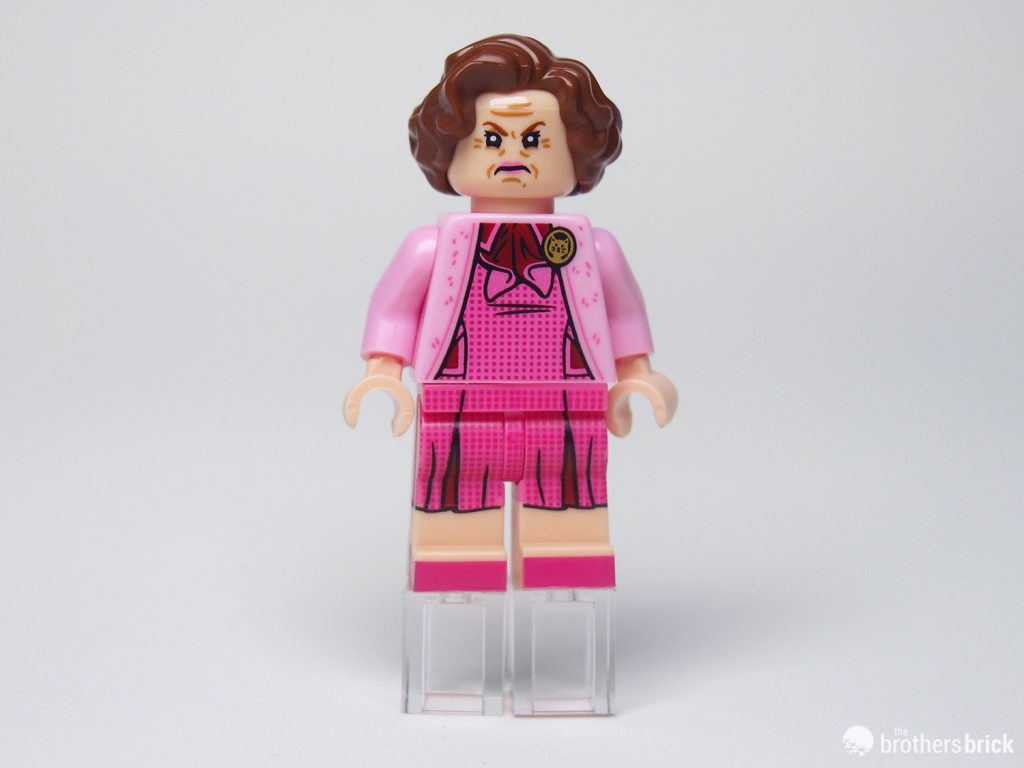 The new version is now more movie-accurate, with a cardigan printed with random texturing and a pink dress with pink shoes to match. She wields a wand and her signature teacup as the accessories. The tea cup was first featured as an accessory for Sybil Trelawney from the recent Harry Potter Collectible Minifigure series. 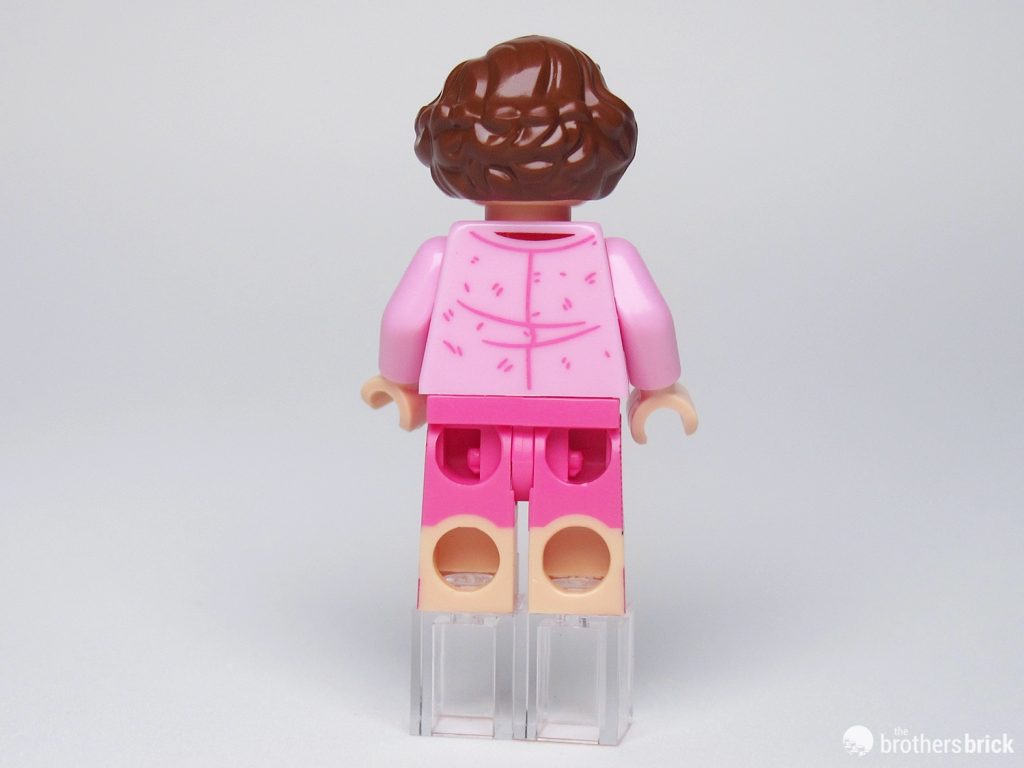 This minifigure version of Severus Snape is rather unique, appearing for a particular classroom scene in the movie and book series for only a short period. This version is a major improvement over the version released in 2004, which had a silly glow-in-the-dark head, no hat, and no purse. Boggarts are a type of non-being that takes on the form of the viewer’s worst fear, and only by making them ridiculous can you defeat them. Potions professor Severus Snape is Neville Longbottom’s worst fear, so Neville defeats the Boggart by making it wear his grandmother’s ridiculous outfit. 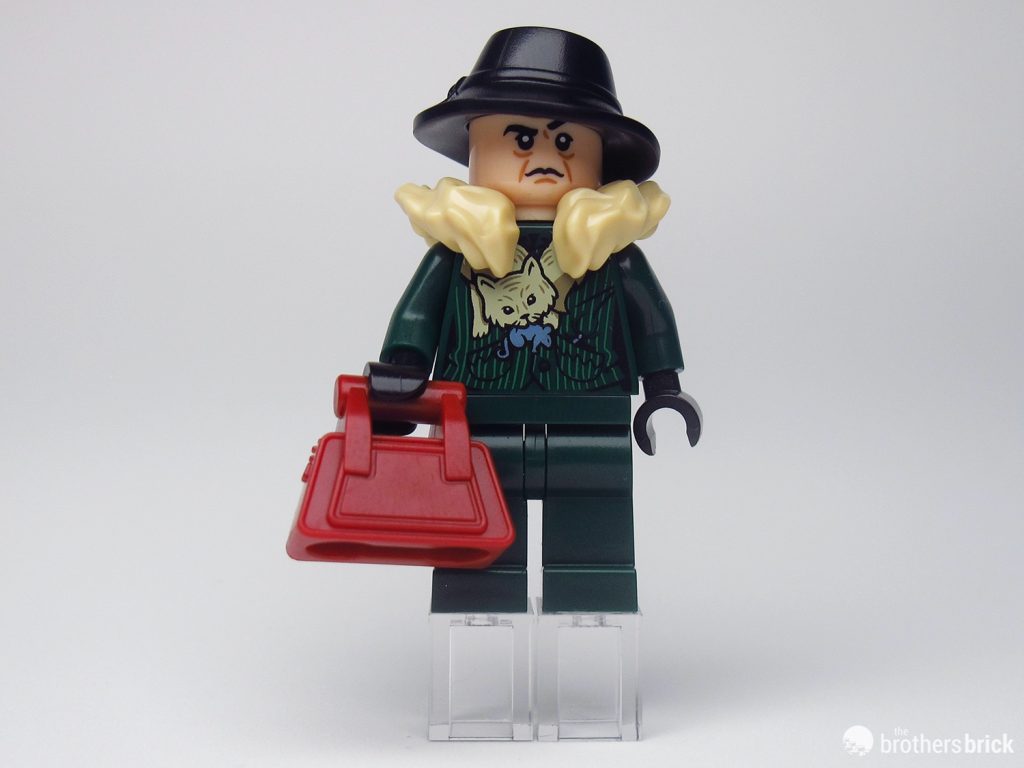 Boggart Snape dons a fur collar (in the same color as the piece used for the Occamy nest in Newt Scamander’s Case of Magical Creatures) in the form of a cat and holds a red purse while wearing an old lady’s broad-brimmed hat. The torso printing is perfect, with the fur collar merging into the print of the cat. I never noticed a mouse held captive before in the movies, but it looks like this torso print has captured it all. 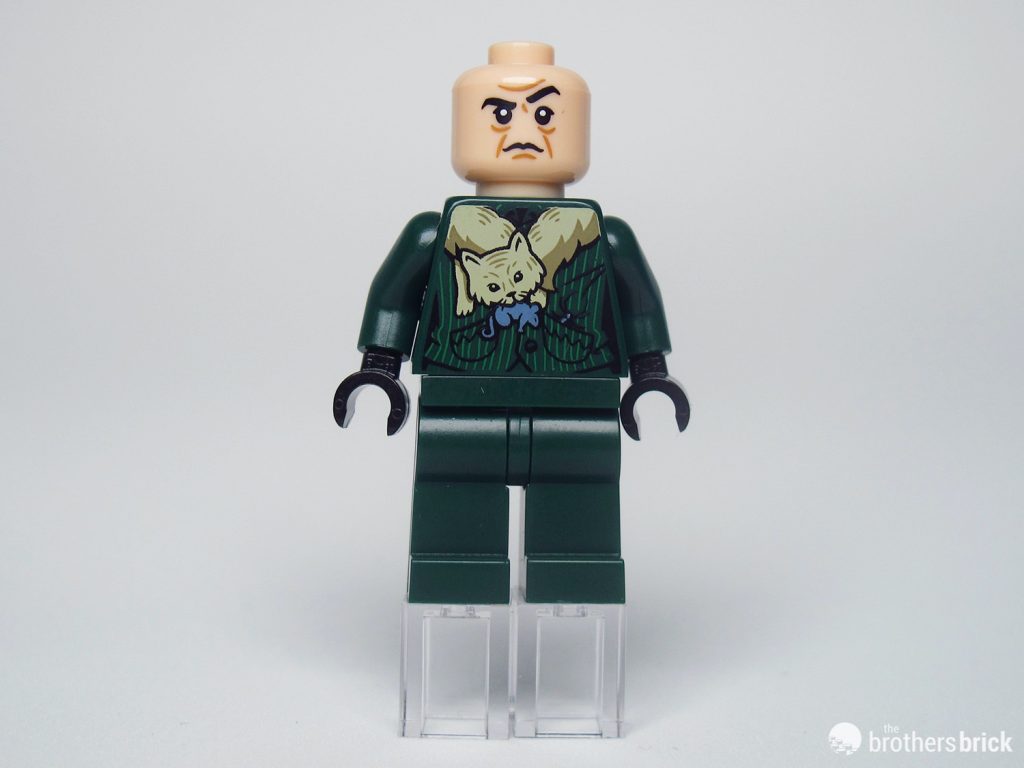 The black hat appears in a new color, previously only available in brown with printed details. Though it very much captures the essence of the character, it is missing the scrawny-looking bird that sits on top of the hat from the particular scene from the movie. (Interestingly, the hat itself has a small hole in the top, and had a crow piece when it appeared on the Series 11 Scarecrow, so this version could certainly have accommodated such an accessory.) 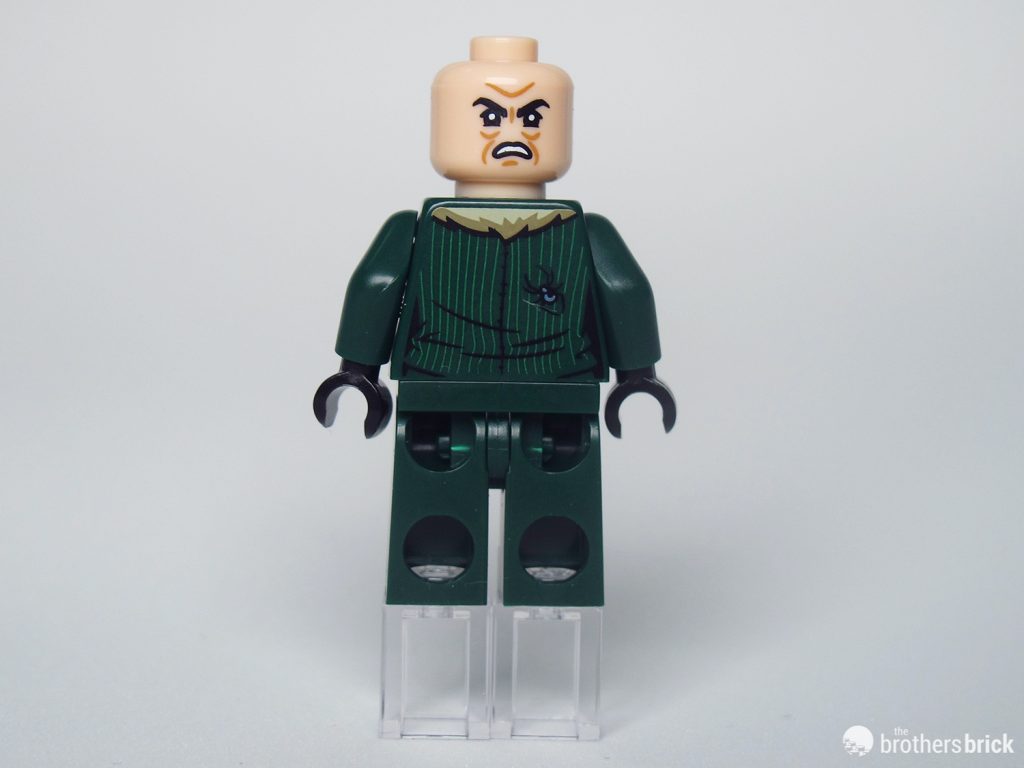 Finally, Snape’s headpiece is reused from Hogwarts Whomping Willow [75953] and Quiddicth Match [75956]. It features a dual expression — one of an angry face, and the other with a surprised look with an eyebrow slightly raised. The back of the torso continues the striped print with a spider crawling on it, but the legs are not printed.

These four minifigures are unique enough to add to any hardcore Harry Potter fan’s collection. They may not feature great accessories, but the figures alone are unique and feature new, never-before-seen characters such as Professor Horace and major updates to characters like Boggart Snape and Dolores Umbridge. 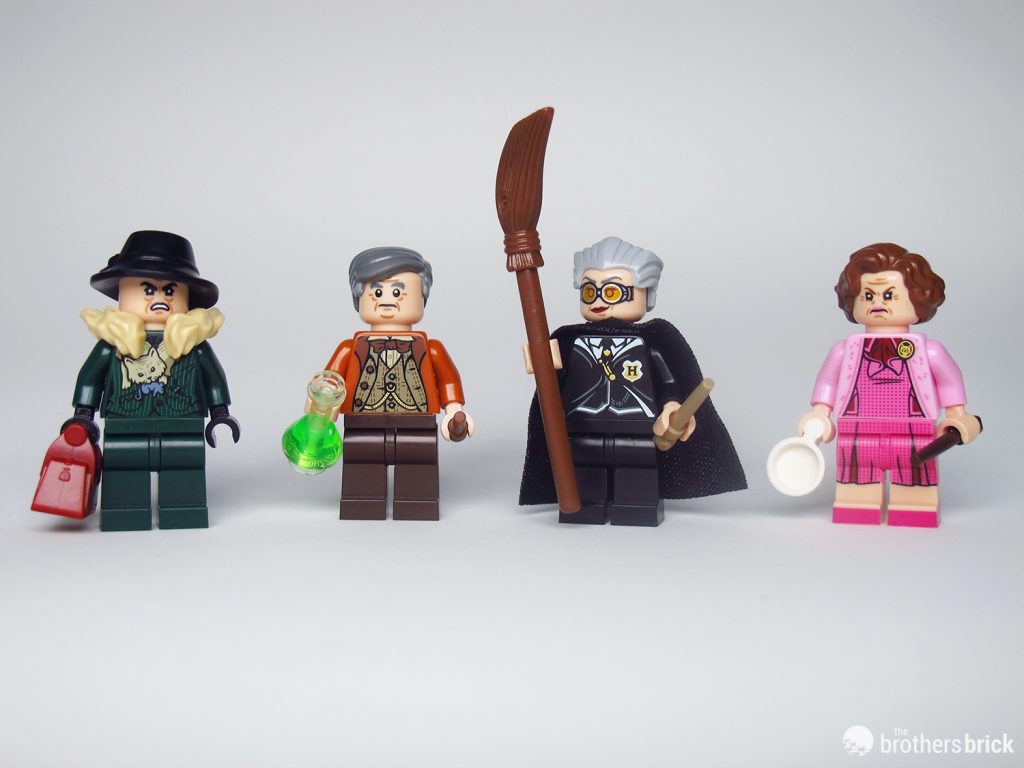 If you want to collect these, though, doing so may be rather tough, since these will only be available for a limited time and at limited locations. Nevertheless, they’re great figures, and acquiring them will be a no-brainer for competionist collectors. If you haven’t gotten yours already, perhaps getting them from third-party sellers (at a bit of a premium price) may be possible, including sellers on Bricklink, eBay, and the Amazon.com marketplace. 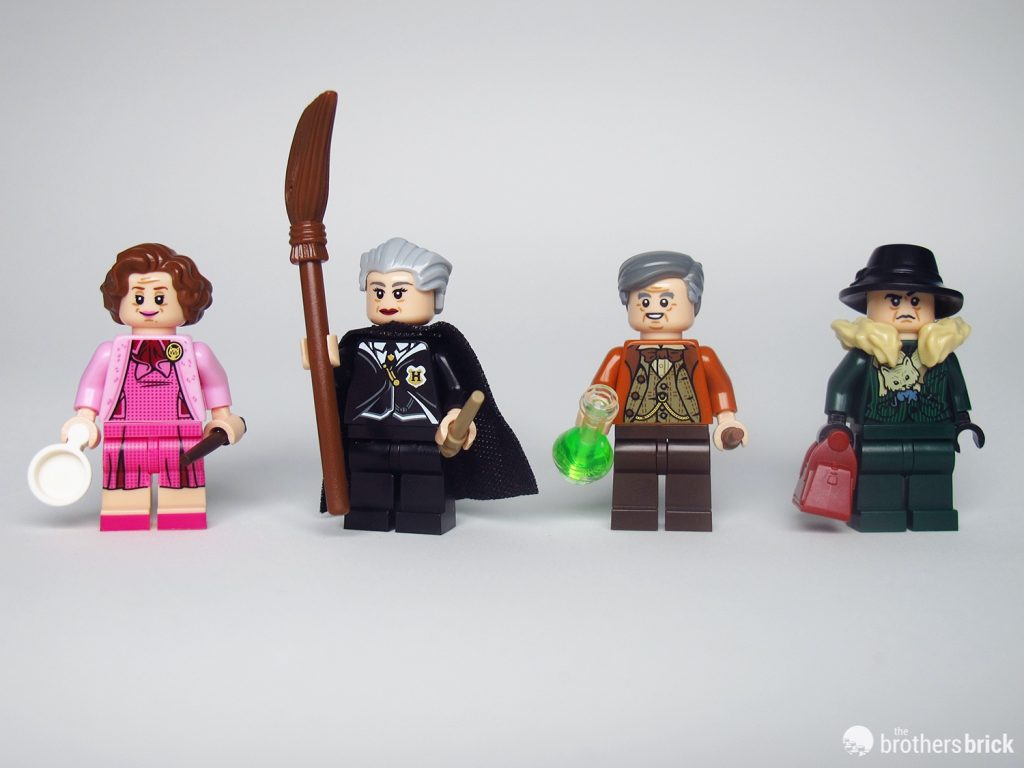 Check out our Harry Potter Collectible Minifigure Review or if you’re still hunting them in stores, download our Feel Guide.