This dark and mysterious figure by Fedde Barendrecht represents a powerful evil from H. P. Lovecraft’s horror stories. While not as well known as Cthulhu, Nyarlathotep is just as terrifying. In the stories and poems he is said to have a thousand forms, and Fedde has decided to build possibly the most sinister of them in LEGO; a tall, slender man with coal black skin and clothing, with tentacles spreading from underneath his robe. 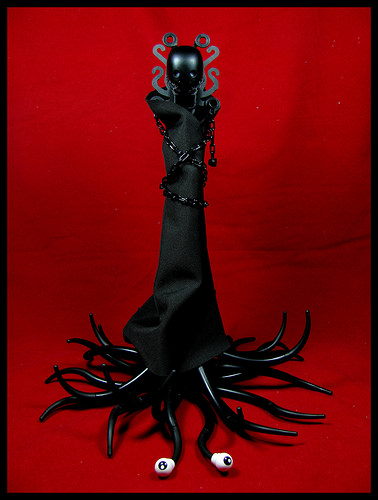 Most of Fedde’s builds are small with a funny theme, generally centered around an imaginative new use for an exotic brick. Every now and again, however, a nightmare-inducing creation like this one pops up. The build itself is simple, or at least it uses very few pieces, apart from the numerous tentacles. My favourite part usage is the octopus used as Nyarlathotep’s mouth and the tentacles behind his head.