For years LEGO Harry Potter fans have been asking for a complete model of Hogwarts Castle. LEGO has made more than 20 sets depicting various parts of the wizarding school, some with just a few rooms or a bit of wall, and some with large parts of the structure. Some were excellent, and some were not. Now LEGO has finally created the whole castle in a single set, using a massive 6,020 pieces to sculpt 71043 Hogwarts Castle in microscale, including 27 microfigures and 4 minifigures. The set is available beginning today for LEGO VIP members (signing up is free), and will be available to everyone beginning Sept. 1. It retails for $399.99 USD. 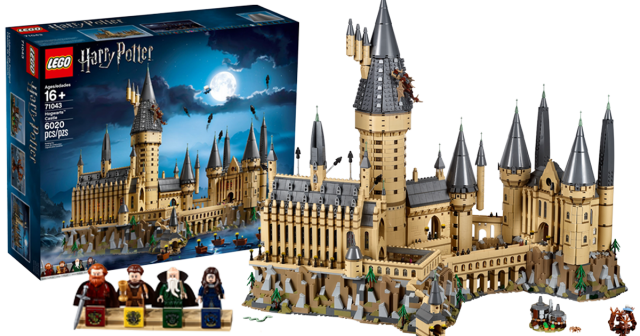 Wondering if you should spend your hard-earned cash on a set this big? Check out our hands-on review of 71043 Hogwarts Castle, or see more of the official photos in our announcement article. You can help support The Brothers Brick by purchasing this set and others through the links below.

Note that you must be logged in to the LEGO Shop Online as a VIP member to purchase the set before Sept. 1. Additionally, although LEGO generally rolls out its releases beginning at midnight for each region, it appears this one may be slightly delayed in some regions.

While it remains to be seen if LEGO has produced enough of this set to fulfill demand, if the sales of the even-larger Ultimate Collector Series Millennium Falcon were any indication, this Hogwarts will be hard to find for quite some time. The Millennium Falcon was only available for a few hours at a time before going on backorder, until nearly 6 months after release.