Not all LEGO creations begin with a brilliant flash of inspiration. For instance, earlier this week SuckMyBrick was stumped. An attempt at building a famous celebrity using LEGO bricks didn’t turn out quite as planned, so the builder turned to their flickr followers for suggestions of how to salvage the build. Lucky for us, a couple commenters suggested that the character might work as Guybrush Threepwood, the protagonist of the Monkey Island video game series. 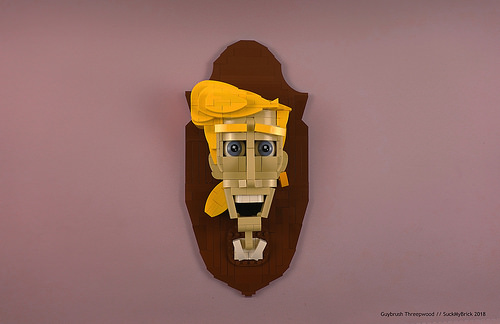 The BrickHeadz eye tiles make fantastic pupils when paired with the 2×2 and 3×3 radar dishes. A variety of curved slopes and curved arches are used to recreate Guybrush’s signature pompadour.

This just leaves us with one question: why is his head mounted on a plaque? I don’t know, but if this was an adventure game, I would definitely check behind it for secrets.