I don’t know why, but I love hovercraft. They are to me like spaceships are to Benny. Are they boats? Or planes? Or something else? Regardless, I really wanted 42076 Technic Hovercraft to fill the Technic hovercraft-shaped void in my soul, an emptiness left unfulfilled by previous Technic Hovercraft (8824, 42002). The Hovercraft retails for $89.99 and includes 1,020 pieces. 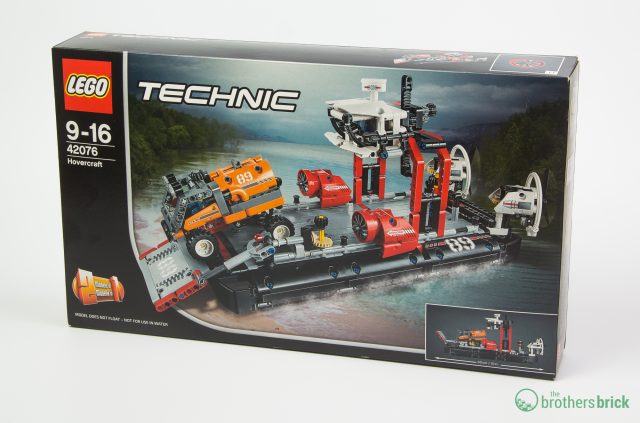 Was this kit worth the $90 to build and play? Read on to find out. 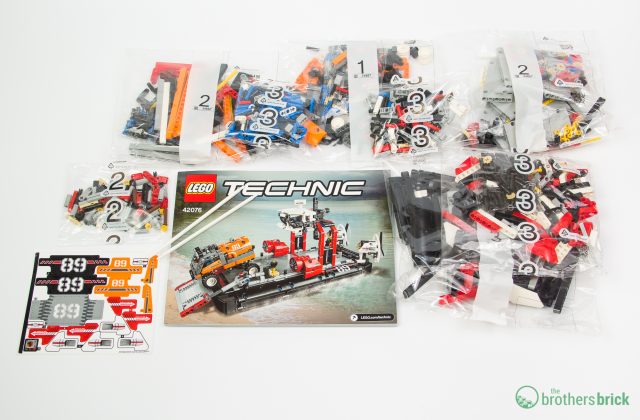 Unlike some other Technic kits that I’ve built recently, like the Rally Car, the pins are mixed together with other parts in the bags, instead of being pre-sorted in their own bag. After opening each bag, I spent the better part of five minutes sorting out all the pins. 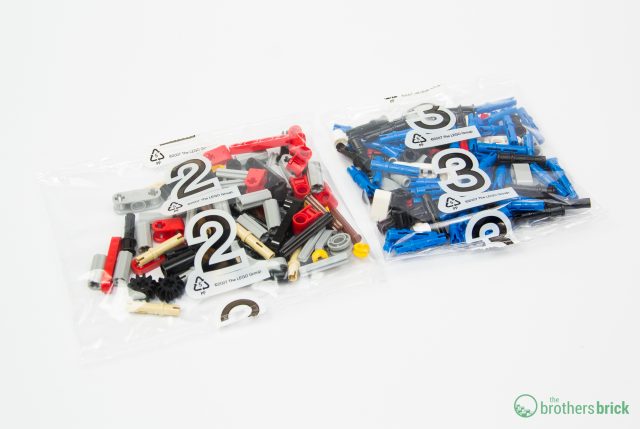 This model has a modest collection of orange parts. Otherwise, it contains a typical assortment of Technic parts in red, white, and black along with the ubiquitous blue pins. 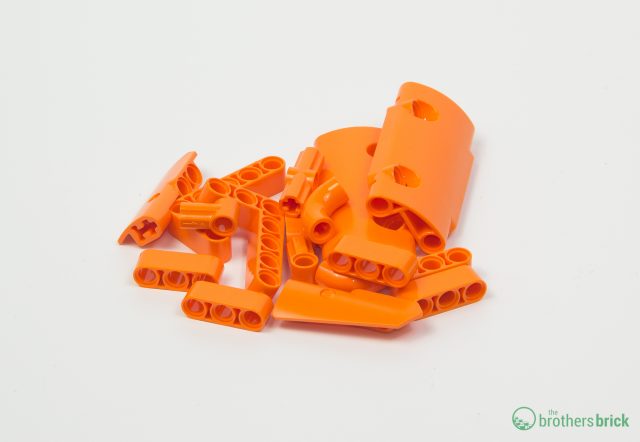 There are a small number of parts in new colors, including 3L axle pins in red as well as axle pin connector hubs and 1 x 2 Technic beams in white. 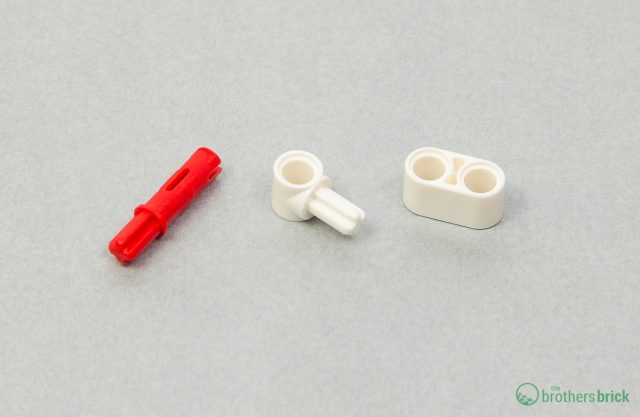 If you want to stock up on gray or black panels, this model is for you. The kit contains a plethora of gray panels (9) and long, 11 x 3 curved panels (12). 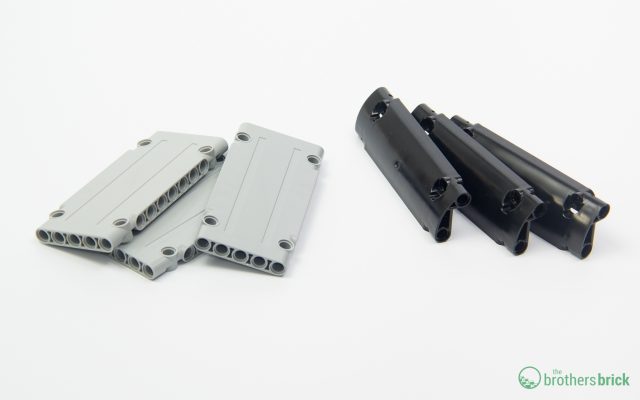 Admittedly, I don’t normally use stickers on my models unless I’m reviewing a set; I strongly prefer printed pieces. In the case of this model, the stickers don’t really add much to the overall design, and on their own, the stickers are rather plain and not terribly interesting.

That said, all of the stickers are large and applied to large parts, making them fairly easy to apply.

Side note: the box shows the vehicle’s number as “89,” although it could just as easily be “68” (depending on how you arrange the parts). I almost applied one sticker upside down before I took a close look at the box art. 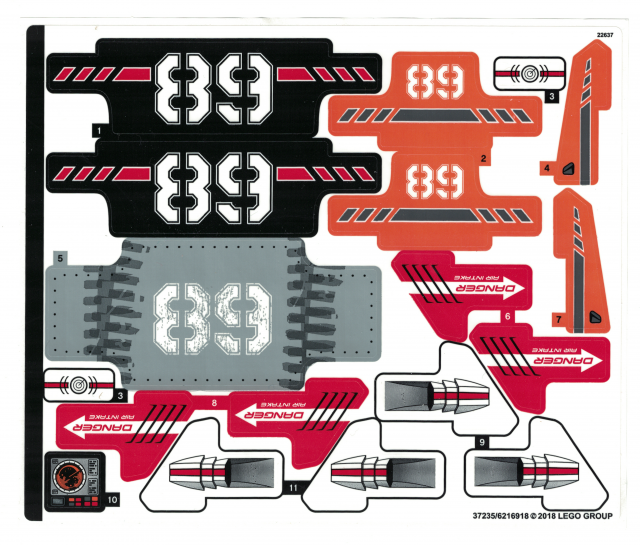 Overall, I enjoyed building both the main hovercraft model and the additional service truck model included in this kit, although neither is terribly complicated. The hovercraft design consists mainly of a flat deck and curved side panels covering the axles, gears, and wheels beneath. It didn’t take very long to complete the model.

The small truck model from the first set of bags drives on and off of the hovercraft. The construction of the truck model is more involved than I had anticipated, as it requires a lot of small parts. The instructions seemed needlessly complex for a minor complementary “play” component.

That said, the little truck does have some interesting design choices. It was strangely satisfying for a complementary/secondary model in a kit, and turned out to be very “vroom-able.” It shows a lot of versatility for a small Technic model, and in particular, I admired the building techniques used for the seats of the truck. These use several thin liftarms pinned side-to-side to form the seat surface. 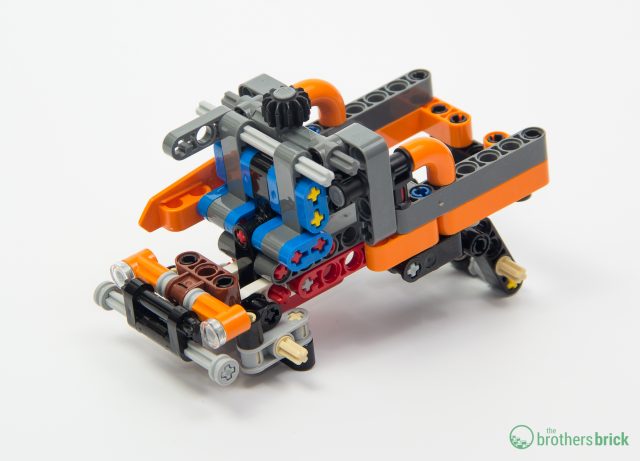 The cargo box itself comes together a bit wobbly. To allow the hovercraft’s crane to pick up the cargo, the cargo box nestles onto the back of the truck without any pins or other connections, relying on a couple of exposed studs to create enough friction with the bottom of the truck to keep it from falling off. Spoiler alert: it doesn’t work so well … 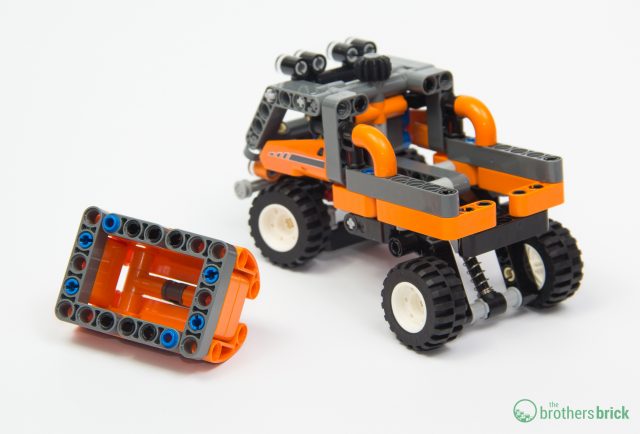 It’s quite fiddly to get all of the long axles to line up under the deck of the hovercraft. The power wheels (that is, the wheels that generate the torque that spins the rotors) seem needlessly far forward of the rotors themselves. 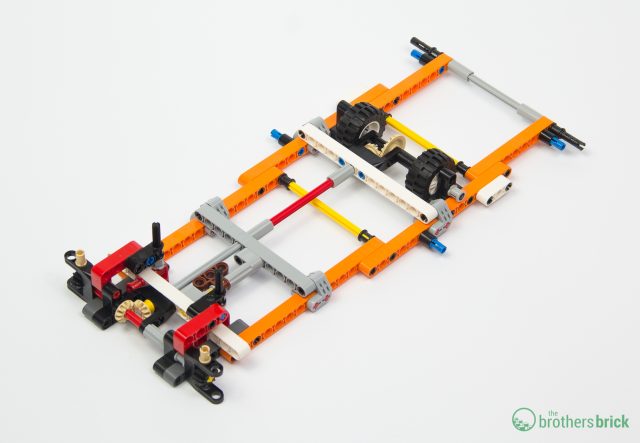 At the end of bag 2, you have a hovercraft sandwich that feels like it’s going to fall apart if you look at it wrong. The two gear assemblies on either side of the top of the deck, in particular, wiggle around most un-Technic-like. Typically, the inside-out building style of modern Technic models produces solid assemblies, even at the midpoint of the instructions; not so in this case. 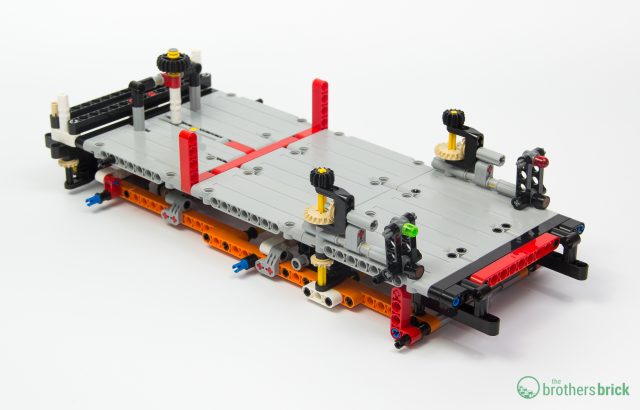 The pontoons and cabin of the hovercraft come next with the third set of bags. With the addition of the pontoons, the model finally gets some torsional stability. The undercarriage of the hovercraft remains open, however, allowing the wheels to spin (and accordingly spin the rear rotors). 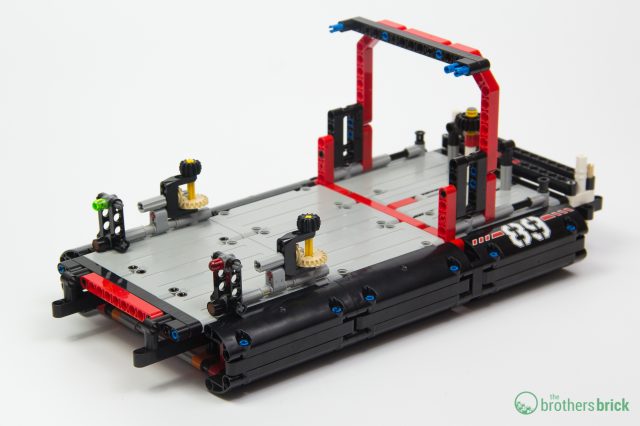 The open undercarriage and the narrow pontoons are visible when turning the model upside down. 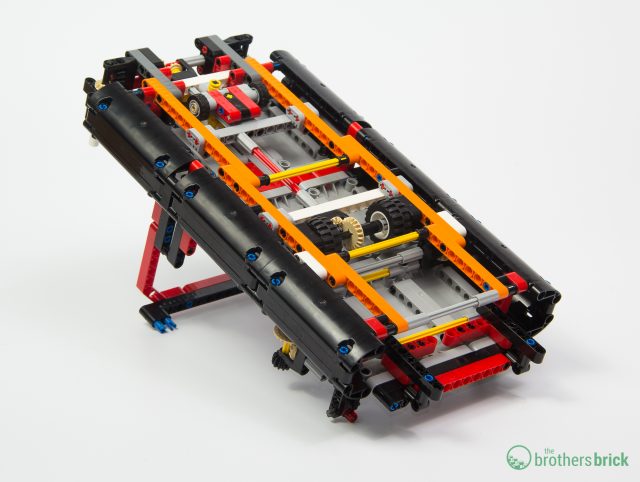 Finally, however, we have some payoff, where we connect the front ramp of the hovercraft. Ideally, this would secure the railings of the model, which it does to a degree. However, the railings still feel flimsy.

Confession: Dropping the ramp should have been easy, except that I installed one of the gears below decks that operates an actuator upside down. Taking this part of the model apart to repair was no easy task. Based on that experience, I don’t envy future me when I need to disassemble this model to put it away.

Taking apart the pontoons on the side allowed me to fix the problem, but raises a logical issue: why not wait to place the pontoons until after the front ramp has been assembled? 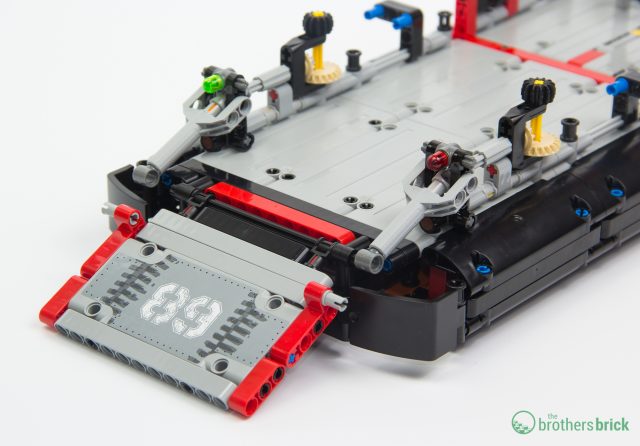 This model becomes cooler as I install the actual rear rotors. Not only do the rotors spin as you roll the model along the floor, but they even change direction as you turn the model from side to side. So awesome. 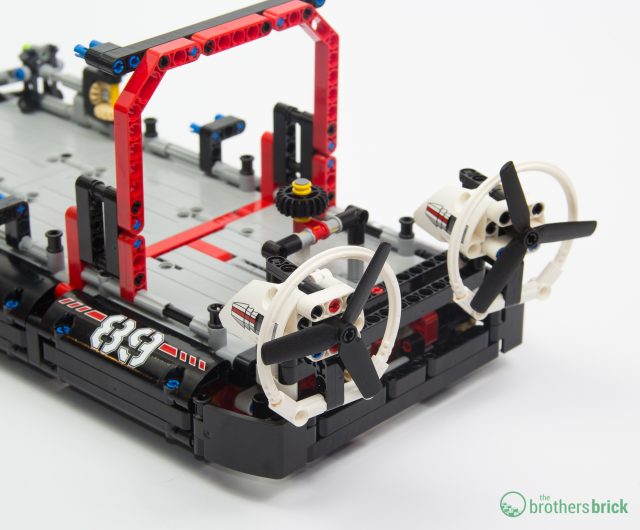 On the other hand, flimsy doesn’t begin to describe the crane assembly. Seating the crane arm requires trapping the crane arm against the raised horizontal arm with another horizontal liftarm. After this step, I thought “Surely the instructions will direct me to secure this more firmly somehow, installing a guide or brace or something later.” Nope, that’s all for this crane: simply a vertical liftarm with gear teeth that’s sandwiched between two other liftarms. 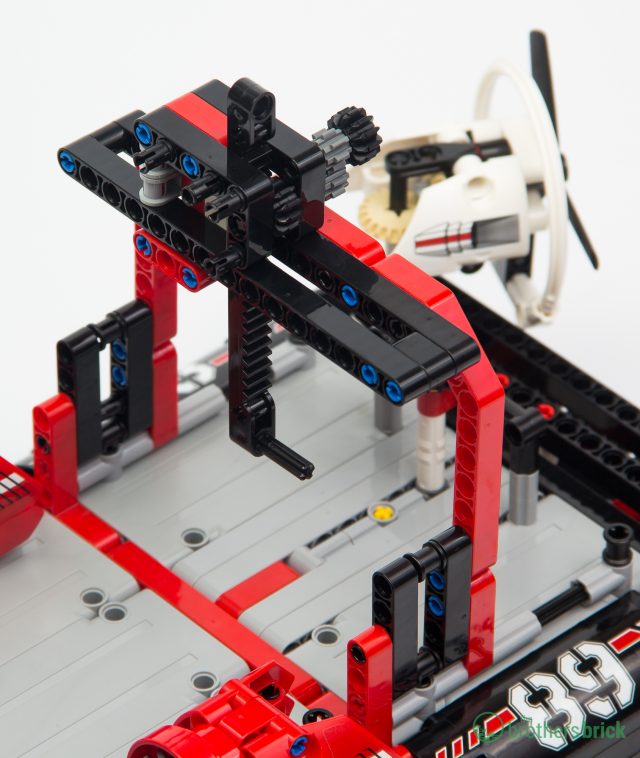 Finally, we get to the pilot’s house of the hovercraft. Thankfully, here there’s another really clever little build, showing off some of the detail you can create using Technic parts. 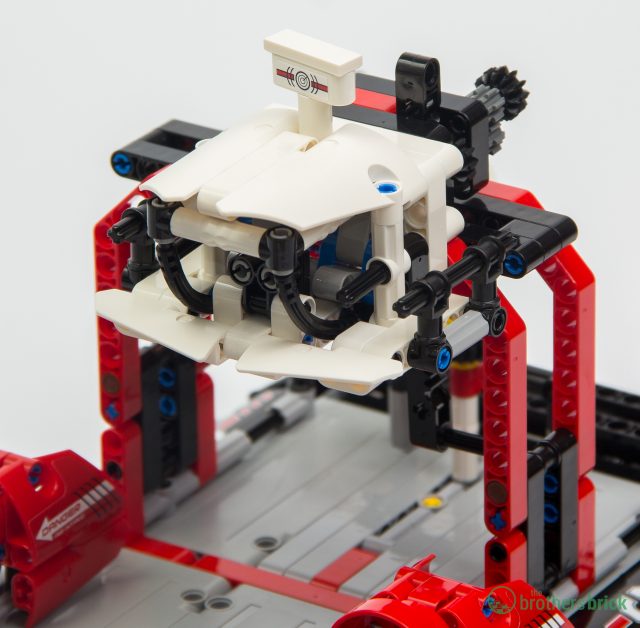 The finished model and play features

This model is easily the largest hovercraft model released by LEGO, certainly larger than both previous Technic hovercraft kits or any of the City ones. 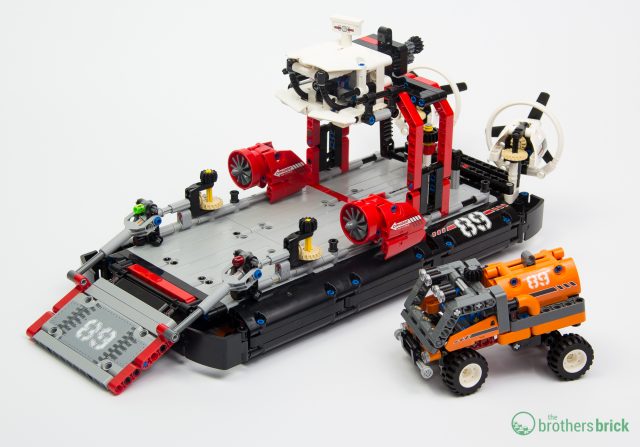 I love that the propeller rotors spin when you roll the hovercraft along the floor. It’s a nice detail that adds to the play functionality of the model. 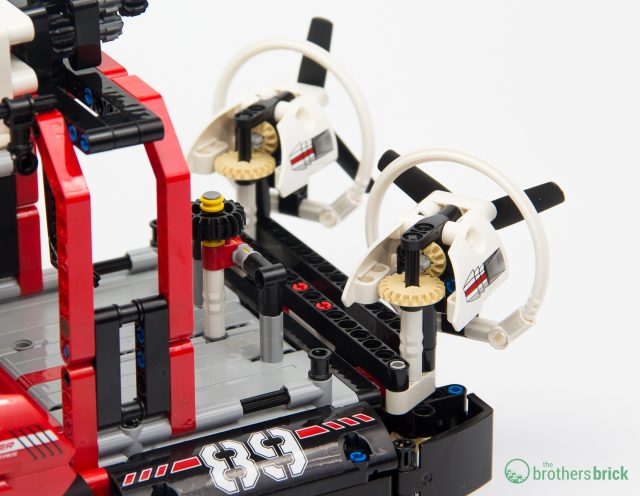 This gear at the rear of the hovercraft’s deck allows the rotors to turn as if steering the vessel; the gear also turns a small pair of wheels under the deck. I love the feature and turning the rotors, but the steering gear disturbs the clean, flat surface of the deck. 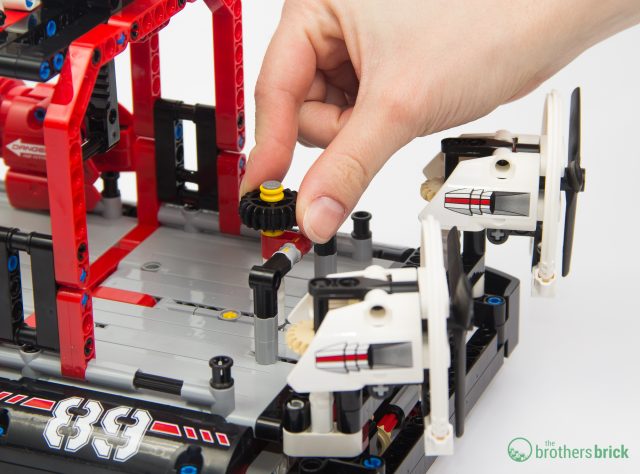 After the first mishap on installation, the ramp has become a favorite feature on this model. The two gears on either side of the hovercraft’s deck allow the ramp to raise and lower. The motion is surprisingly smooth. 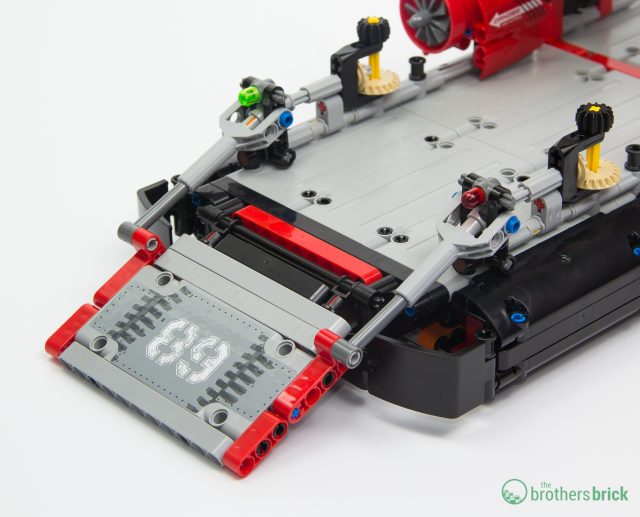 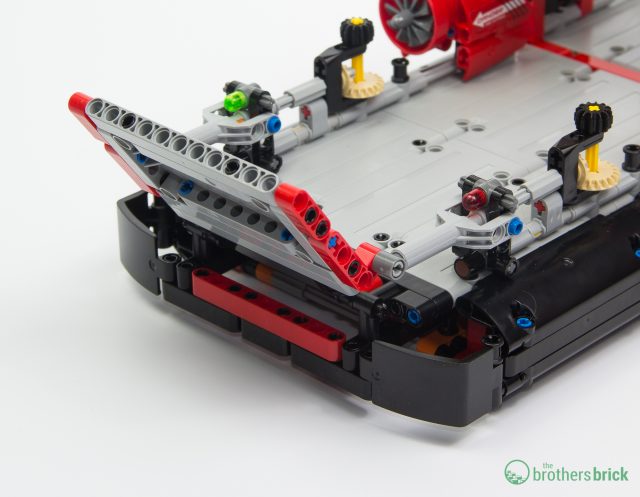 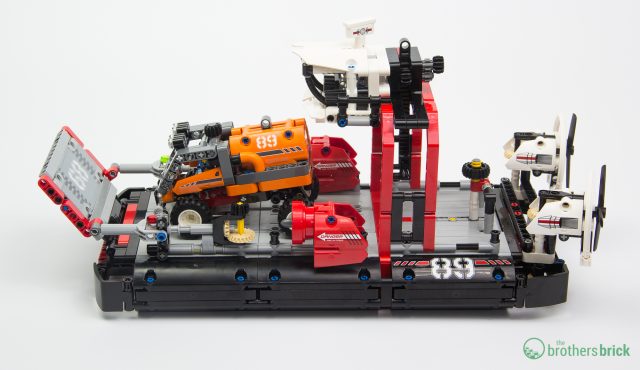 Moving the hovercraft on the floor, my hands struggled to find an appropriate hand grip. The cockpit feels flimsy and wiggles in my grasp when rolling the model on the floor. The side rails are no help here either, as they are even less stable than the pilothouse. 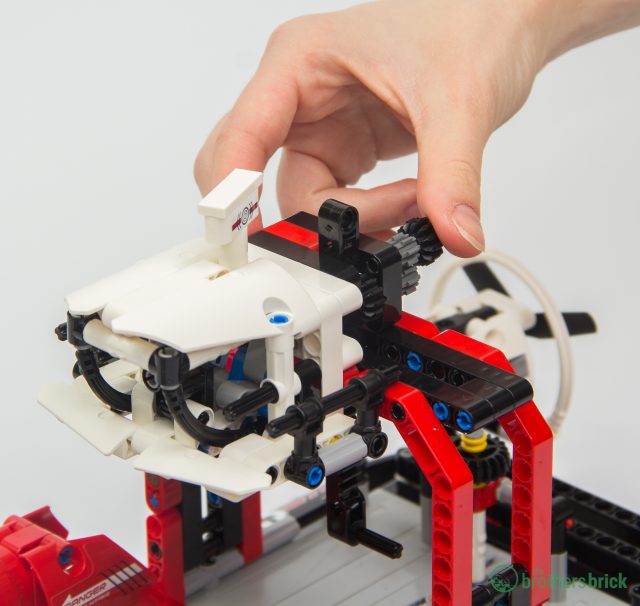 As I mentioned earlier, the little service truck has some excellent features of its own. The front wheels turn when you spin the gear on top and the rear suspension is pleasantly springy. 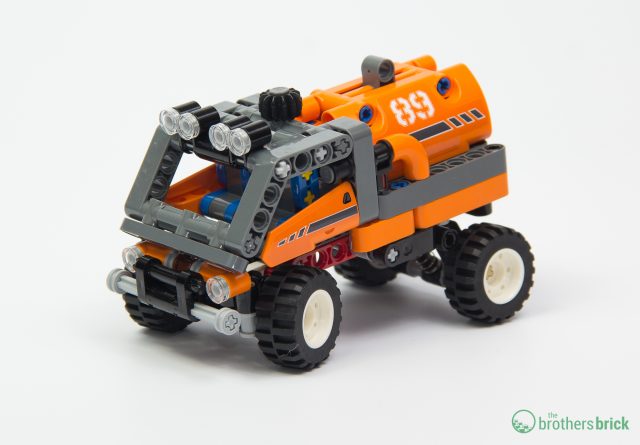 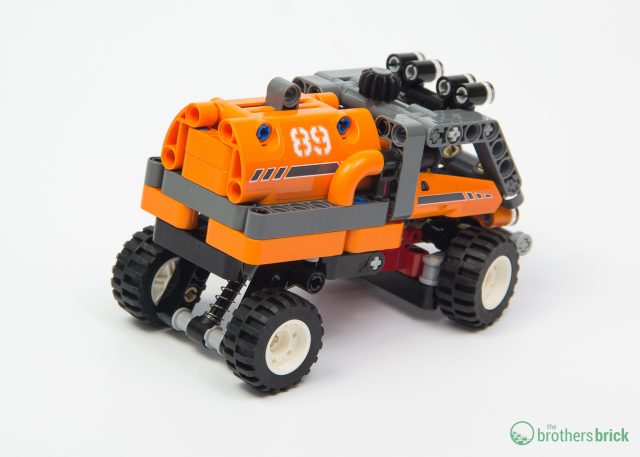 The crane connected to the pilot house raises and lowers the cargo box into the service truck. The pilothouse shuttles back and forth on its arch towards the rear of the craft, allowing the crane to be aligned with the pin hole at the top of the cargo box.

Overall, I like the idea of this play feature as it combines the two models in a meaningful way. Even so, lining up the crane arm with the grommet at the top of the cargo box requird some finesse and was often frustrated by the wobbly crane. 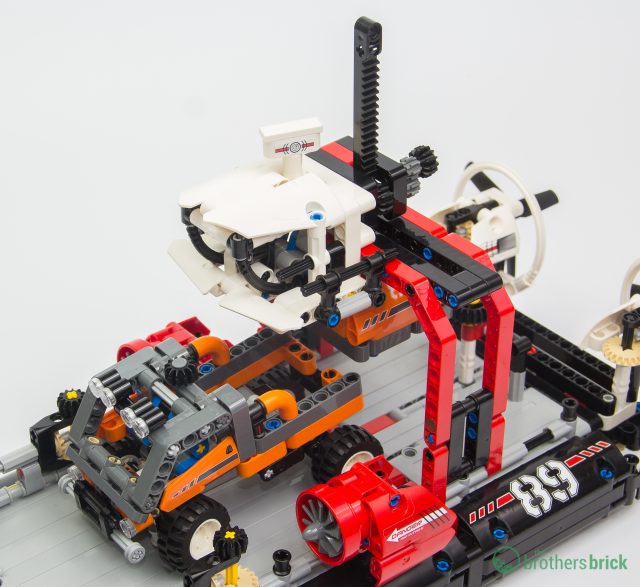 On the whole, the Hovercraft is good, but not great. The primary design elements of this model provide the play features that I would expect and want from such a model. I love the spinning rotors, the front ramp, and the cool pilot house. The service truck complements the hovercraft quite well.

However, the model has some significant blemishes too. The crane and cargo box interactions seems like a great idea with mediocre implementation. Quite frankly, the deck features on the hovercraft are simply flimsy, definitely not at the same level of stability I’ve come to expect from Technic models. This model wobbles in weird places more than most of the other kits I’ve recently put together.

The design elements of the model are solid but not amazing, leaning towards functional rather than elegant. The model has a distinctively “hovercraft” silhouette. I admire the attention to detail evident in the cab of the truck and pilothouse of the hovercraft (to the degree that detail is feasible with Technic at this scale).