Until our review of 10759 Elastigirl’s Rooftop Pursuit yesterday, The Brothers Brick had not done a review on a LEGO Juniors set. But with the new Incredibles 2 movie coming out this June, there’s a small wave of sets being released in May that will not be featured in their own regular theme. Juniors sets also often include some pretty nice parts, so we thought this would be a good opportunity to share our reviews. In this article we’ll take a look at one of those sets: 10760 Underminer Bank Heist. This set retails for $24.99 USD, with 149 pieces, including three unique minifigs: Elastigirl (Mrs. Incredible), Mr. Incredible, and Underminer. 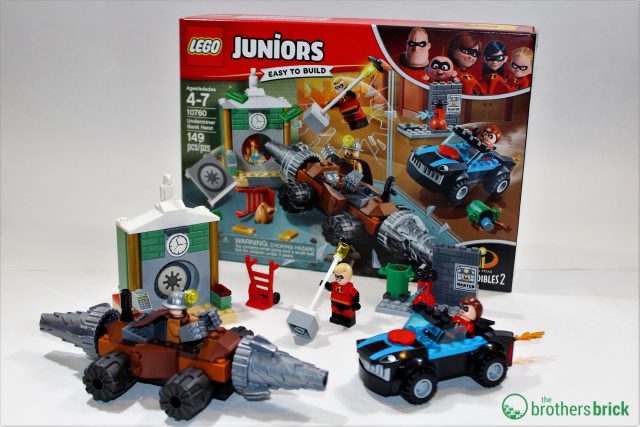 The front of the box showcases Underminer using his giant double-sided drill to break into a bank vault. Meanwhile Mr. and Mrs. Incredible are on their way to save the day! 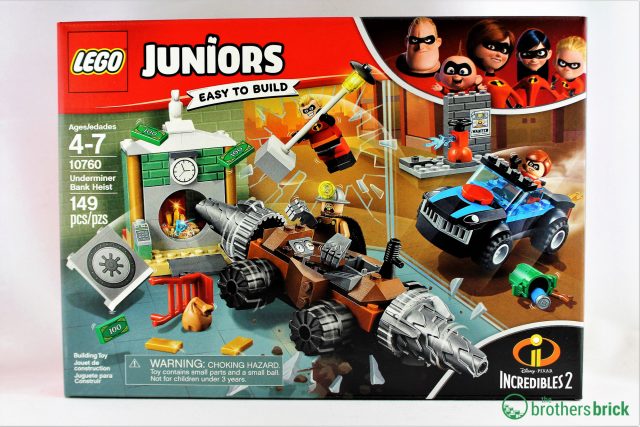 The back of the box displays the easy-build components, as well as the couple thwarting Underminer’s evil plans. Like most Juniors sets, it shows all the parts spread out so it’s easier to see what’s included. 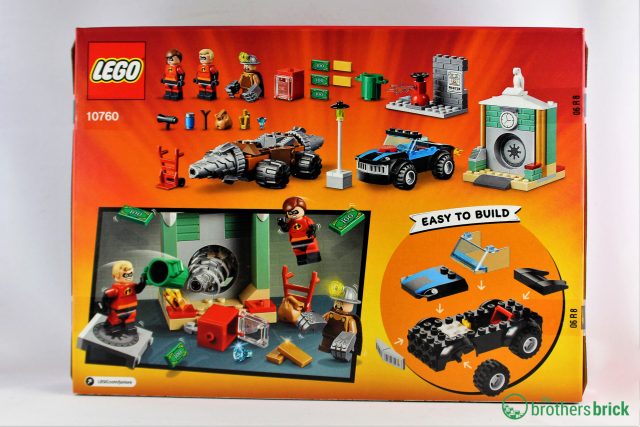 The box contains a folded instruction booklet and three numbered bags (the third including a small parts bags inside). It also contains a few of the larger, easy-build, single-mould parts that are characteristic of Juniors sets: a car body, another vehicle chassis, and a modified baseplate. One of the best parts about this and most other Juniors sets is that there are no stickers. Instead, all decals are printed, and the bigger the set, the better it gets! Woohoo! 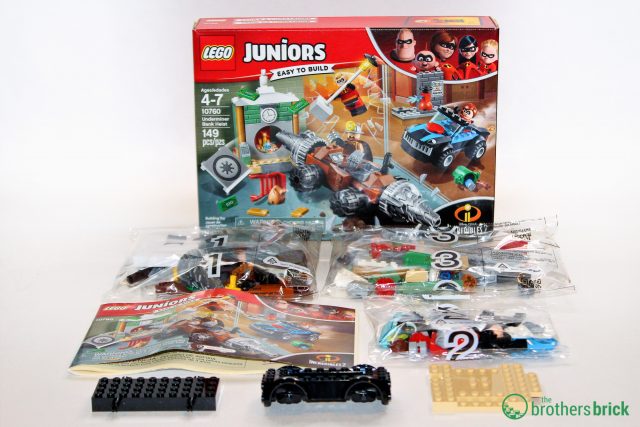 The instructions in many Juniors sets have a cartoon or comic in the back, depicting the story behind the model. This one shows the Incredibles hanging out prior to taking down Underminer. Apparently Mr. Incredible enjoying a fully-clothed bath from a fire-hydrant is perfectly normal behavior. 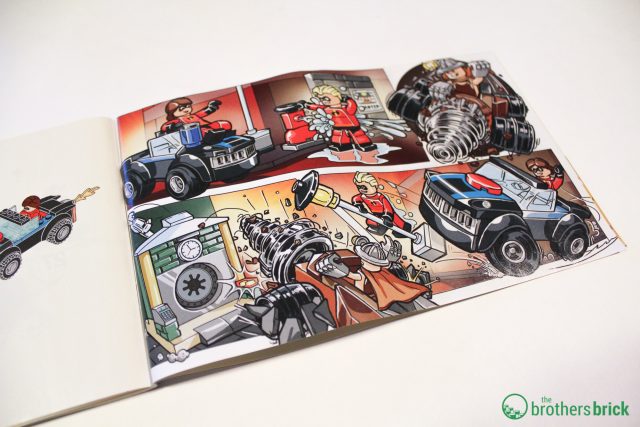 Bag one of this set includes Mr. Incredible, a lamp post, Underminer, and all of the parts that go into making his super villain drilling machine. Another great thing about Juniors (at leasts from a junior’s perspective) is that most aspects of the build are pretty symmetrical, making them super simple and fast to build. The vehicle has a place for Underminer to sit, complete with a control panel, a megaphone (or phaser?) and a crate to hold his loot. The drill pieces on either end rotate for play. 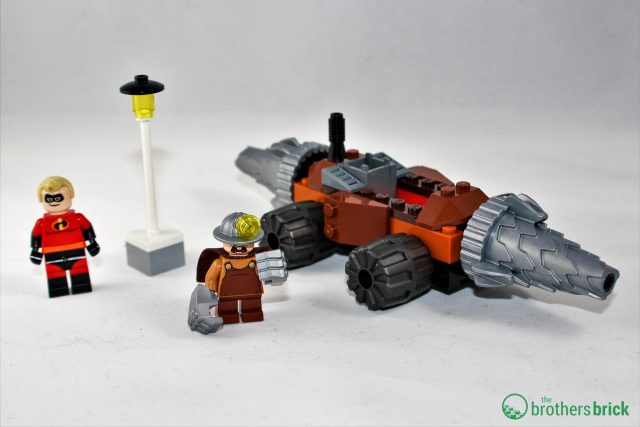 The dark brown 1×5 supports used to hold the drill bits have only been in this color in one other set, released this year. (LEGO City 60173 Mountain Arrest) There are two parts used on this driller that haven’t been seen in several years. The 1×4 dark orange bricks used on the sides of the vehicle haven’t been around for 13 years and last appeared in the Star Wars 10144 Sand Crawler. Also, the 1×6 dark brown plates have not been around for 8 years, and last appeared in Disney Pirates of the Caribbean 4193 London Escape. 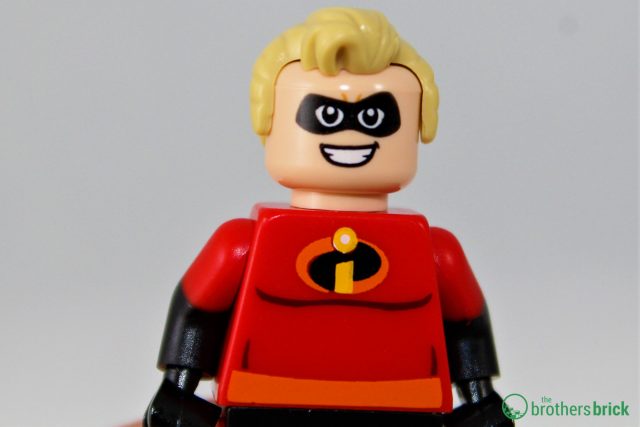 You might recall that Mr. Incredible was one of the characters released with the Disney Collectible Minifigures series. Interestingly, they chose not to use the same figure. While the hair is the same, the rest of the minifig is new. The differences are slight, but most notable, the orange part of his waistband is printed onto the torso instead of the legs. This allows his spandex to be a little bigger and perhaps slightly less like a speedo. This version also has a two-sided face (a smirk and a toothy smile) compared to only one in the CMF version. 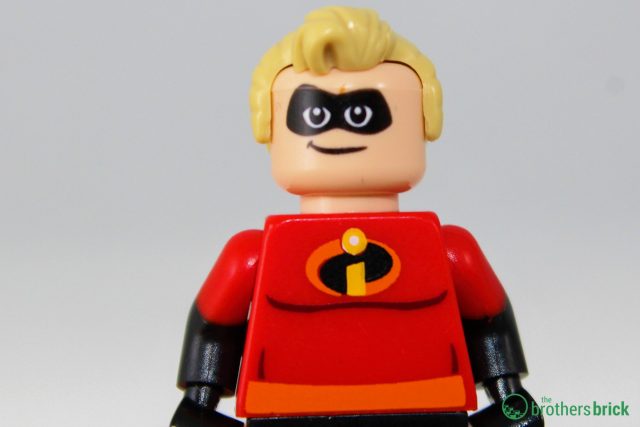 The Underminer minifig torso, head, and cape are all brand new. Almost all capes up to this point have had two head holes, but this cape only has one, which is interesting and pretty nice. A single hole means the cape tends to stay more horizontal, but I think it works well in this case. It’s more “flow-ie.” I also really enjoy the print for his mole-like face. 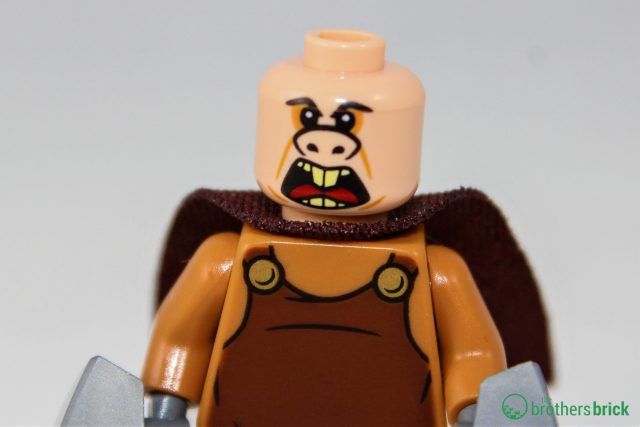 Bag two includes Elastigirl and all the components of her superhero car. The easy-build car body made this one extra quick. It sports a flaming turbo-booster, and a custom printed hood to match the dark azure stripes on the sides. Elastigirl herself is completely new. In this set she has normal-sized arms, vs. set 10759 Elastigirl’s Rooftop Pursuit, where she has her elongated “elastic” arms. Like Mr Incredible, her face is also double-sided. 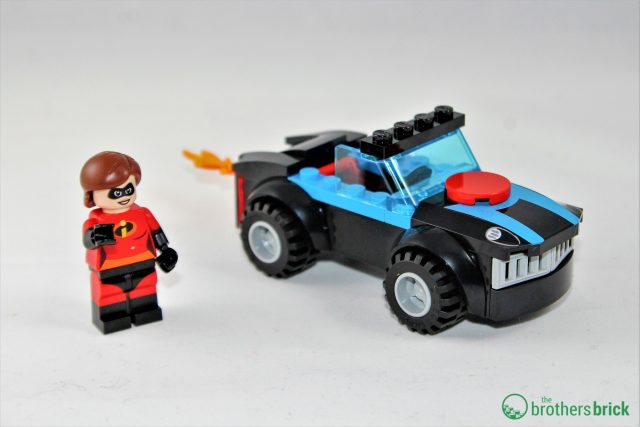 Bag three of this set contains all the parts for the bank vault, as well as a little fire-hydrant street scene complete with gold, money, and garbage (soda can and stick). Again, symmetry made this one pretty quick. Interestingly, there is a red dolly that has plenty of playability potential that isn’t displayed very well on the box-art. 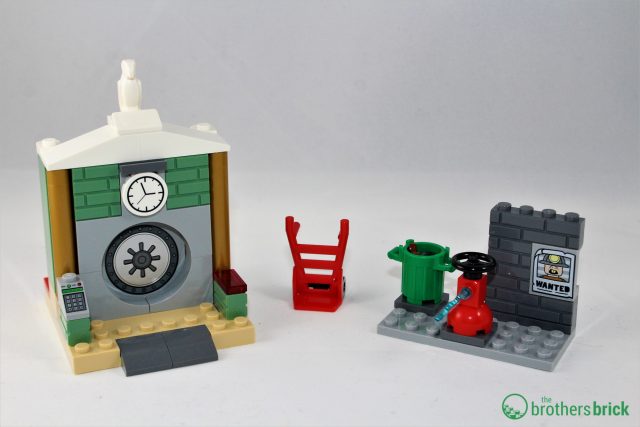 This set is loaded with parts that have never been seen before in terms of specific color or print. The first is the white parrot, which is showing up in this color for the first time. The same is true for the 8×8 tan modified plate used as the base. Both the 1x2x2 panel depicting a wanted poster, and the 1x4x3 panel depicting the bank safe door, are also new. While the wanted poster is pretty set-specific, the latter could happily be used in many other creations. 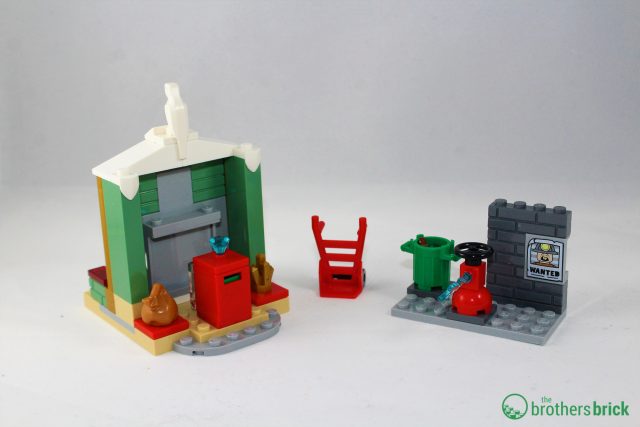 Of course, the large parts that are meant for small hands and shorter attention spans are not ideal for the adult builder, but I think this build is pretty cute. Not many young children will say no to a toy car that they can put their favorite character in. My personal favorite part is the bank vault. I think it’s a perfect little use of parts, and as a kid I was always a sucker for the money and gold pieces. 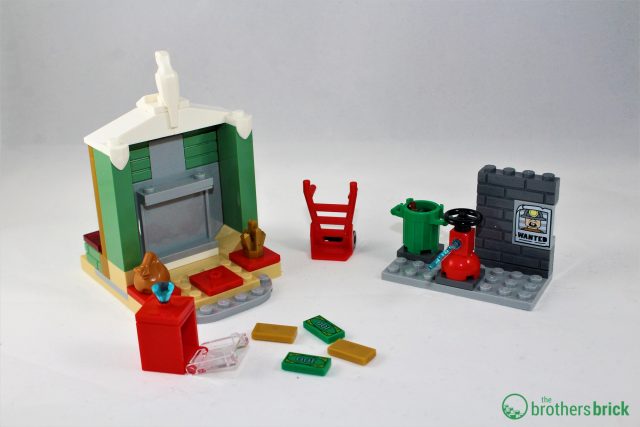 My least favorite part is probably the Underminer drilling vehicle just because I’m not as much of a fan of the clunky drill-bits and wheels. They do work well here, but if I were buying this as a parts-pack for myself, they would be a turnoff. 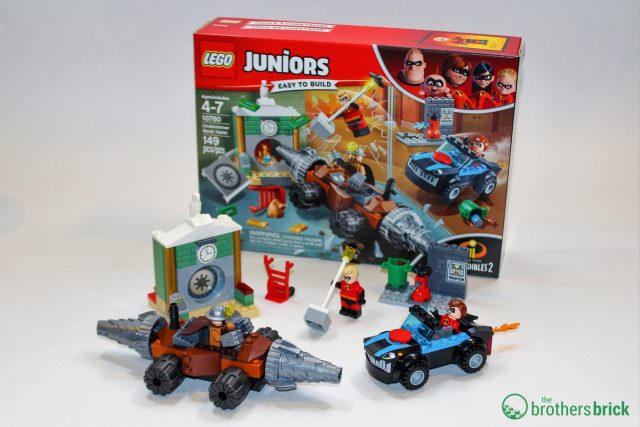 Like many adult builders I’m a fan of the modified “brick bricks,” and I love that this set comes with a nice little handful in two colors. I would also love to have a gazillion of the white parrot… just because they’re rad. That being said, if you are looking at this as a parts pack, it might be good to wait until it goes on sale. Over $0.16 per pieces isn’t a great deal, even if a few of them are rare. I also have a feeling we might see more of these unique parts in the future.

As with the other Incredibles 2 sets, probably the most enticing aspect would be the minifigs. If you’re one of those people who loves to collect figures, then this might be for you. For now, it’s the only set in which you will ever find these exact figures.

I actually built this set twice and the second time was with my 5 year old neighbor, Wylie. I asked him what he thought about it and naturally, he told me his very favorite part was Underminer’s drilling machine. He loved to repeatedly put up the shiny vault door and smash it in with the drill. It was fun to see how he recognized this play feature on his own, without help from me, the box, or the instructions. Wylie also really liked Underminer’s claw-hands and all the gold in the bank, and was oddly partial to the lamp-post. He giggled quite a bit at the comic strip in the instructions as well. Of the two sets we built together (see 10759 Elastigirl’s Rooftop Pursuit), this one was by far his favorite.

Bottom line: You might be able to get away with waiting on this one for yourself, but my guess is that it will be lots of fun for your kiddo! (You can just “borrow” the cool parts when they are done!) 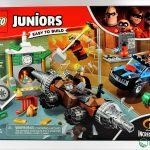 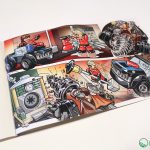 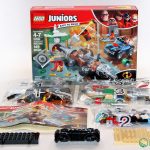 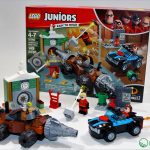 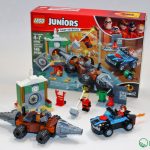 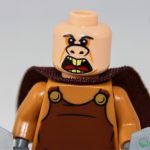 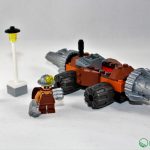 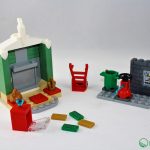 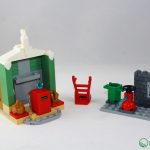 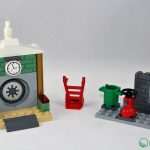 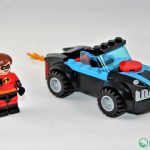 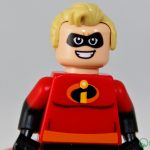 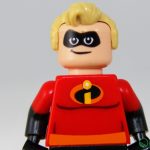