Until now, The Brothers Brick hasn’t done a review of a Juniors themed set. But LEGO’s small wave of tie-in sets for Disney Pixar’s new Incredibles 2 movie will only feature Juniors sets, and since we can’t help but cover LEGO’s official sets based on one of our favorite superhero universes, we decided to pick up them up and see what Juniors has in store. We’ll start with 10759 Elastigirl’s Rooftop Pursuit. This set retails for $19.99 USD, with 95 pieces, including two unique minifigs: Elastigirl (Mrs. Incredible) and Screenslaver, and is available from LEGO Shop at Home. 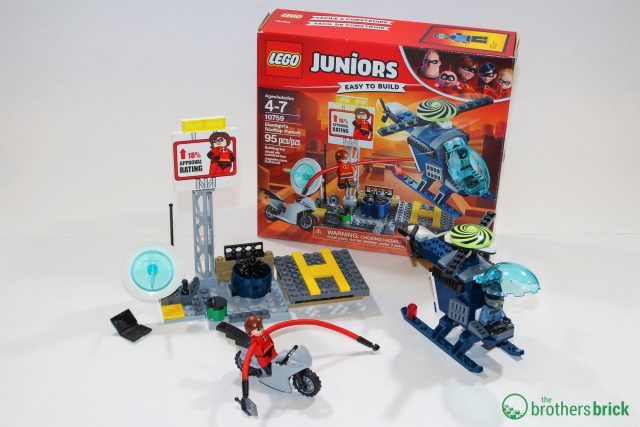 This review will be mostly spoiler-free, but we can’t guarantee the set doesn’t give anything away.

The front of the box appears to depict a specific scene from the new movie, and shows off the play feature of Elastigirl’s arms in action. 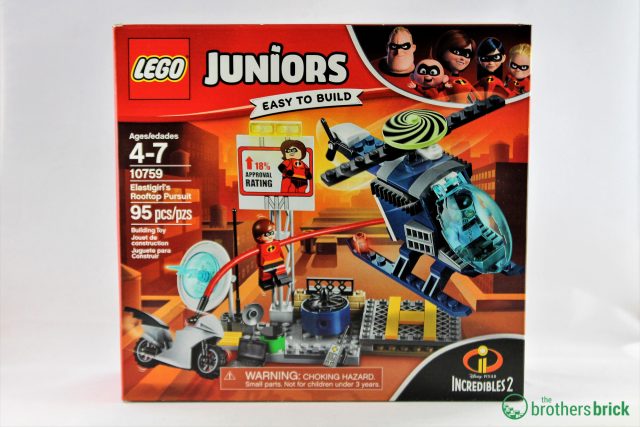 The back of the box prominently displays the easy-build components, as well as some of the play features. Also characteristic of Juniors sets, it shows some of the parts spread out so it’s easier to see what all is included. 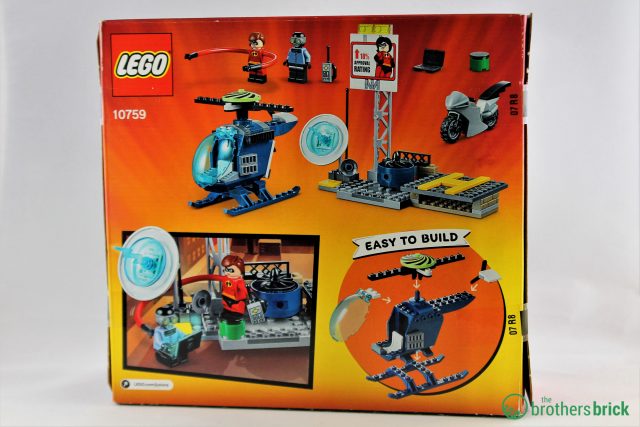 The box contains a folded instruction booklet, two numbered bags, both with small parts bags inside, and a bagged Elastigirl torso. It also contains a few of the larger, easy-build, single-mold parts that are common in Juniors sets: a helicopter body, helicopter skids, and a modified baseplate. One of the best parts about this and most other Juniors sets is that there are no stickers. Instead, all decals are printed. 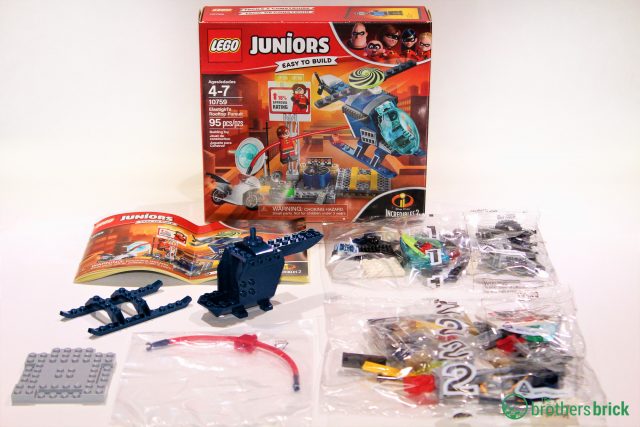 The instructions in many Juniors sets have a cartoon or comic in the back, depicting the story behind the model. This one shows Elastigirl being called in on her motorcycle to take down Screenslaver. 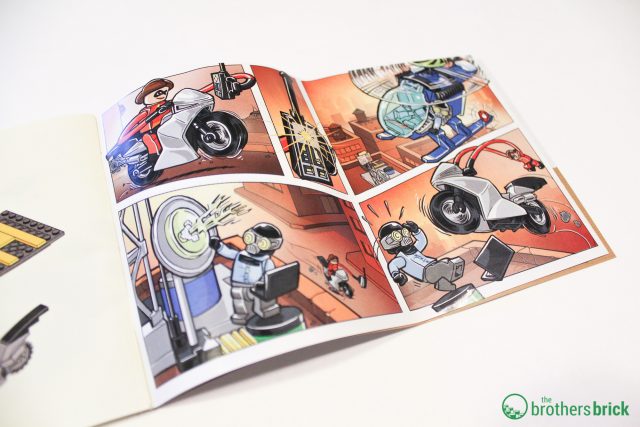 Bag 1 of this set includes the rest of Elastigirl’s body (aside from the separately bagged torso), as well as Screenslaver, and all of the parts that go into making the helicopter and motorcycle. 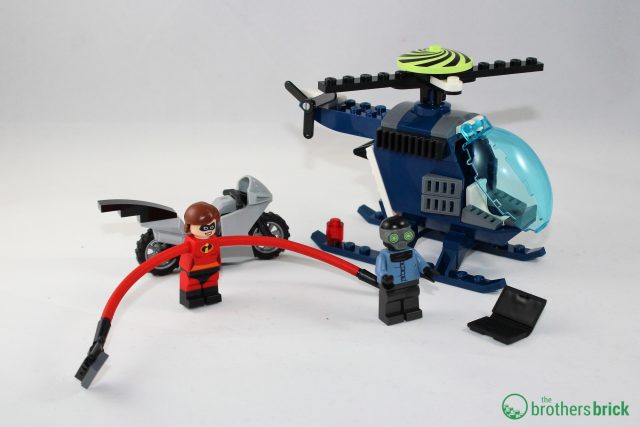 Because the helicopter body comes as one large piece, this is a very quick build, perfect for your five-year-old to master. It includes spinning rotors, a door in the back that folds down, and a cockpit with a windscreen that opens to fit Screenslaver inside. The helicopter body has never appeared in dark blue before, nor has the 4×4 dish been in yellowish-green. This part also has a brand new hypnotic pattern printed on. In addition, the motorcycle has never been in light bluish-grey until now. 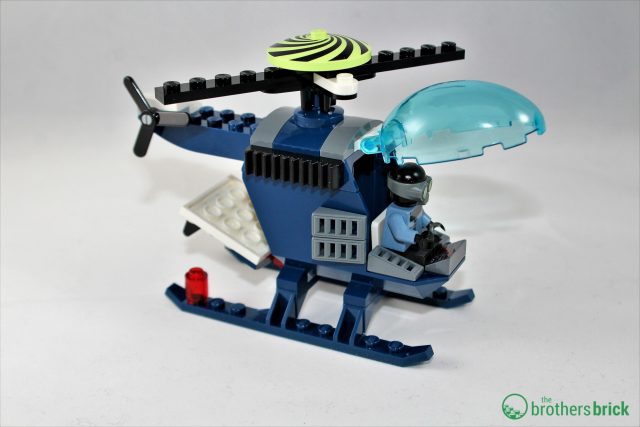 Bag 2 included all the components of the helicopter landing pad. At first glance it looks a little boring, but it has a pretty nice selection of parts, which includes a large printed 6×6 tile for the billboard. The satellite dish and fan both spin, adding additional movement to the play features. 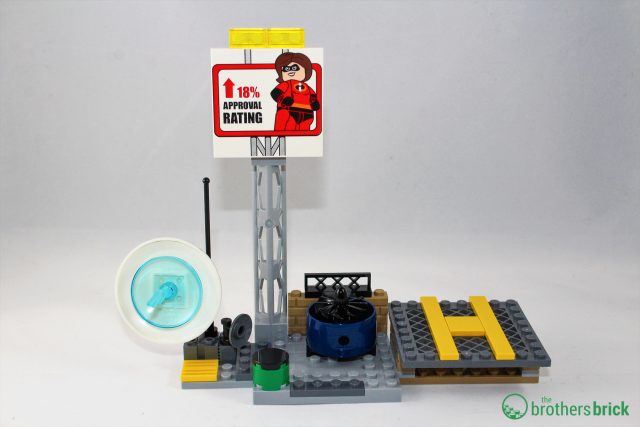 The minifigures are the primary reason most older builders will be interested in this set, and both minifigures are unique to this set. Elastigirl is also included in Underminer’s Bank Heist, but it’s a different design from this one. Elastigirl’s long-armed design used for her torso was only in one other set, as part of Ms. Marvel from Captain America Jet Pursuit. Her brown hairpiece is also new. 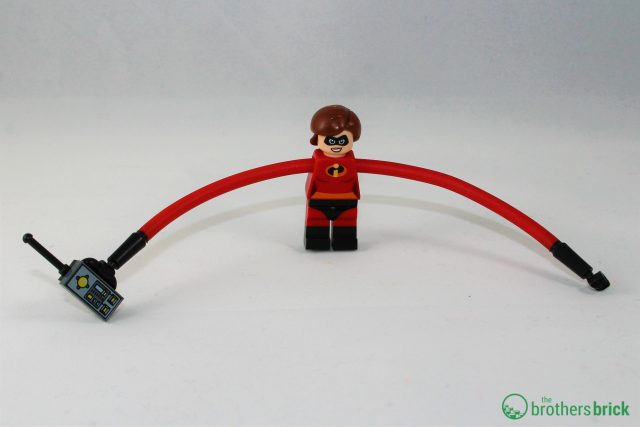 Despite her name, this minifig’s arms are not stretchy. Instead, the arms are a long, rubbery tube, making them ultra flexible. The torso actually slides along the arms, giving the appearance that she can hyperextend one arm at a time. It’s simple, but certainly adds to the fun. 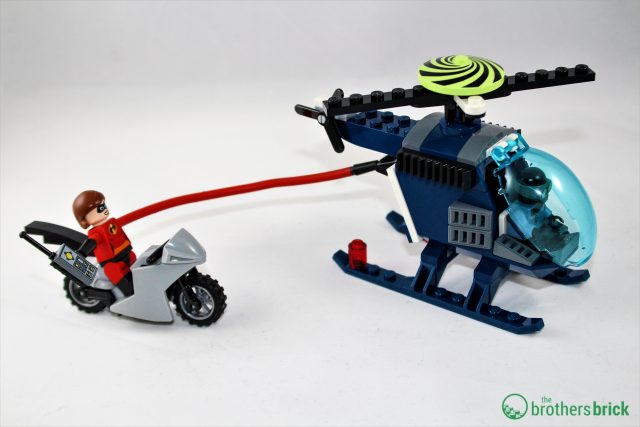 Screenslaver is new except for his pants, and his headpiece is very interesting. It looks a bit like a robot gas mask. He carries a single-piece laptop that can open and shut. 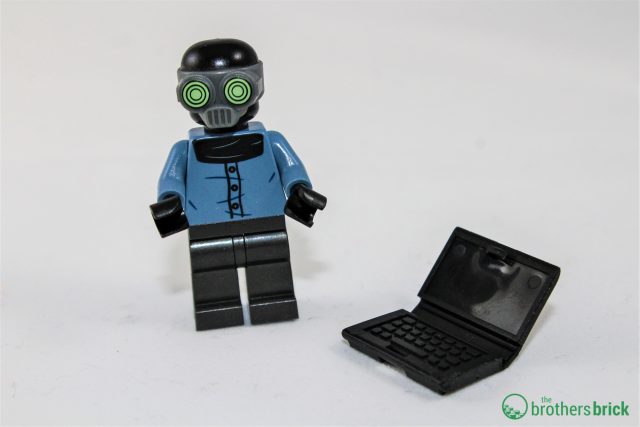 His face underneath is actually sort of creepy. 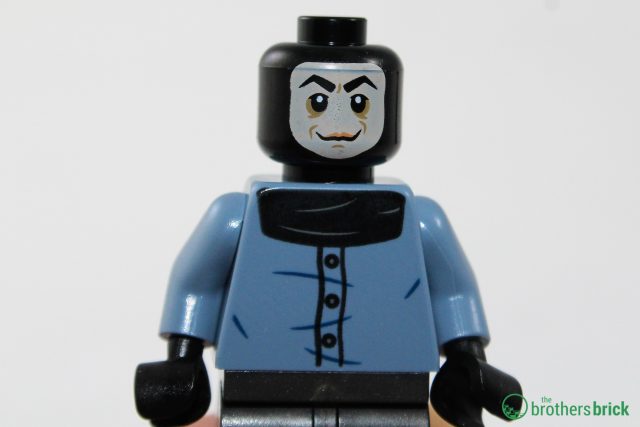 If I were a five-year-old, I would find this set pretty fun! In fact, even though I’m twenty years older than that, I still find it fun, as the helicopter has great “whoosh-ability.” But of course, the large parts that are meant for small hands and shorter attention spans are not ideal for the adult builder. As a Juniors set, it simply lacks the more complex building techniques you’d find in regular System sets, but that’s intentional. The new part colors are cool, but unless you are specifically looking for those combinations, they aren’t that exciting either.

The most enticing aspect of this set is the minifigs. If you love to collect figures, then you will want to keep an eye on this set. For now, it’s the only set in which you can find Screenslaver or Elastigirl’s special torso.

If you’re looking at this as a parts pack, we recommend waiting until this set goes on sale. Some of the pieces are great, but at an average of over $0.20 per piece (about double most sets’ average), this set definitely doesn’t fall into bargain territory. While all the new pieces, printed parts, and color variations in Juniors sets are certainly awesome, often it means they cost more for LEGO to make, and that is reflected in the final price.

I decided to ask my 5 year old neighbor, Wylie, to help me build and get an idea of what he thought about this set. His favorite parts are the “lightning dish,” Elastigirl’s arms, and the way the swirled pattern on the helicopter’s dish hypnotizes you when it spins. Interestingly, while he did enjoy that you can open the door to hold cargo in the back of the helicopter, he wasn’t as much of a fan of the single piece that makes up the body. He thought the best part about that piece was just that it had studs on the sides so he could customize it however he wanted. But overall he really liked the set and pronounced, “There are no least favorites!”

Bottom line: Fairly spendy for the part-count, but lots of imagination and play potential for your kiddo! (Then you can “borrow” the cool parts when they are done!) Also worthwhile if you’re wanting to complete your collection Incredibles minifigures.

10759 Elastigirl’s Rooftop Pursuit is now available from LEGO Shop at Home and various other retailers.