Brick-built aquariums are often extremely cool, but how many can say their LEGO sea-creatures actually move? My guess is not too many. But one clever builder, Mark Smiley, has managed to create an adorable little “LEGO Clockwork Aquarium” that does just that! With the turn of a crank, the fish move in a circle along the tank perimeter. There’s also a crab that hops up and down, and a starfish that spins! If you look closely, you can even see a little Easter Island head in the corner, and a shrimp in the helmet. The whole thing is modular and customizable. But just wait until you see it in action! 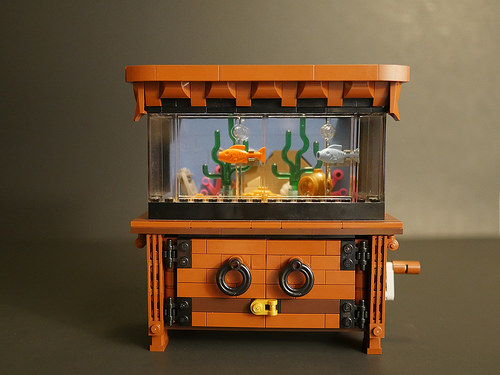 It’s so compact you could easily take it with you! The handsome cabinet even opens up for easy storage of your fish net. Mark has decided to submit it to LEGO Ideas. We don’t often announce when creations we feature are on LEGO Ideas, because so many wouldn’t work well as official sets. However, this is one adorable project we wouldn’t mind seeing on the shelves!