It makes a nice change to see a Norse god depicted in LEGO and for it not to be a version taken from the Marvel pantheon. However, Loki himself might not agree, as Pacurar Andrei‘s latest vignette shows the trickster god trapped in his eternal punishment — chained in the entrails of his own sons, with his faithful wife Sigyn shielding him from dripping snake venom. The legends had it that when Sigyn was forced to take periods of rest from holding the bowl, the venom would strike Loki’s face, causing him to shake and struggle, causing earthquakes. Nice. As for the model, the rockwork on display is very smartly-done (and reddish brown makes a pleasant change from the usual grey), and the colour gradient on the lava is lovely. All-in-all it’s a sweet little scene depicting an anything-but-sweet story. 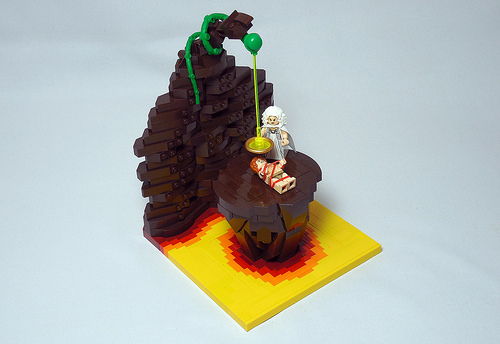