Matthew Hocker has been on the LEGO scene for quite a while now and has had his builds featured right here on TBB. What you may not know is that he has an extended love and appreciation of collecting LEGO ephemera. The term is derived from the Greek word ephemeros, which means “lasting only one day, short-lived.” An ephemera collection consists of the paper materials that frequently get thrown away or lost because of their short-term usefulness or popularity, such as letters of correspondence, sales literature (brochures, pamphlets, catalogues, etc), postcards, ticket stubs, etc. Matt’s love for his LEGO collection enhances his appreciation of the hobby and its vast history. 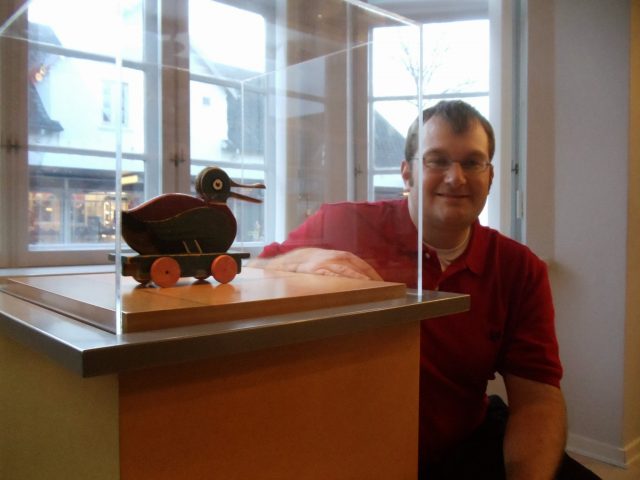 Matt in 2014 together with the wooden duck in Idea House

Matthew has contributed digitized literature and write-ups to Brick Model Railroader and digital contributions to the library section of Brickset. His research skills and appreciation for a collection of this nature stems from his day-to-day role as a librarian.

Our curiosity got the better of us, and we ended up having a long conversation with Matthew, learning a lot about what he does and why he does it. Here’s an insight into Matthew and his collection. 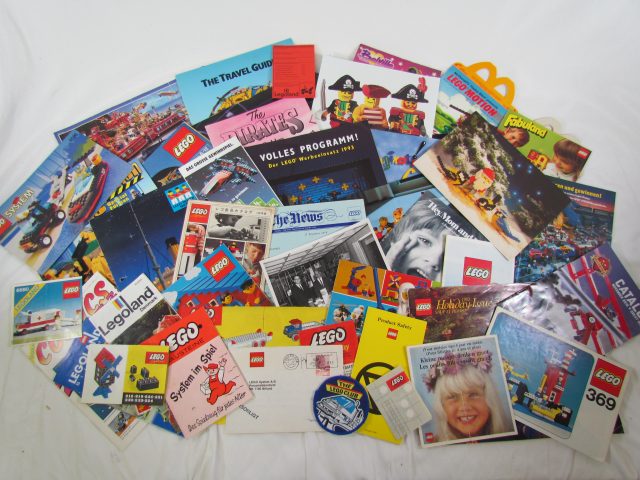 A portion of Matt’s collection of Brochures

TBB: What kind of collection do you have and how long have you been collecting?

Matthew: I have been collecting throughout my adult life but started seriously collecting LEGO ephemera over a year ago. The bulk of my collection is organized into files by year of release and/or publication. The materials in these files date from the 1950s through the present and include building instructions, brochures & catalogues (including some dealer catalogues/flyers), magazine advertisements, informational booklets on the company, decal/sticker sheets, etc. Once the files get into the mid-1980s, there are two folders for each year – one for advertising materials and one for instructions. 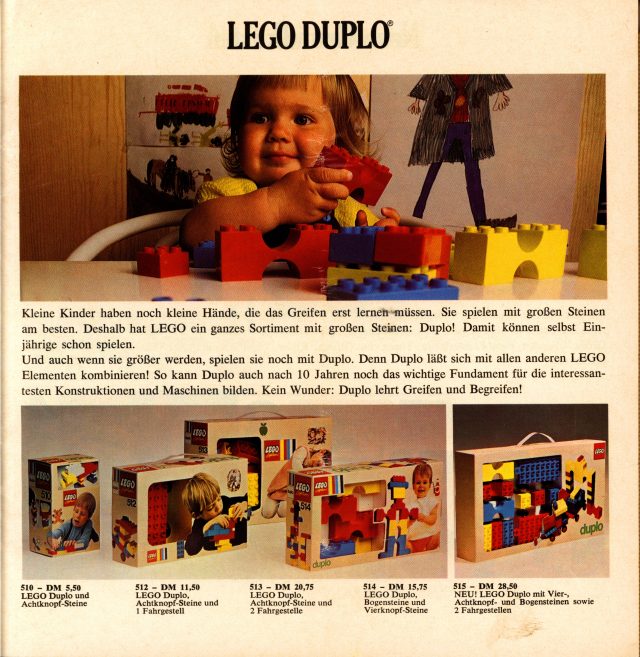 I also have what is known in the library world as the “flat files.” They are called such because the items are pretty flat…which most other things in the boxes are, but they get their own name! These files consist of topical materials which seemed worthy of separating from the advertising/instruction files. These include files with materials on LEGOLAND parks, fan event programs, LEGO-sponsored exhibitions, 3rd party accessory/kit manufacturers, the official LEGO clubs, and more. I also have files on construction toys other than LEGO, with an emphasis on building toys similar to LEGO bricks.

There is a periodical portion of the collection with AFOL magazines (mostly BrickJournal), official LEGO Club magazines (from the U.S., England and a few from Canada. I also have some UK Technic Club magazines and a handful of LEGO employee magazines. 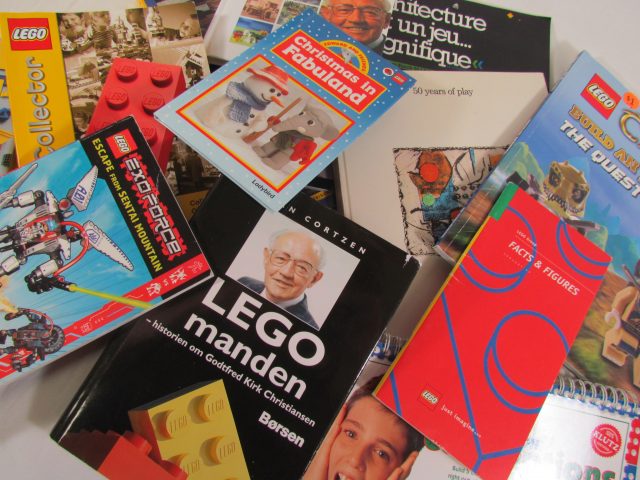 Some of Matt’s books collection

The “cherry on top” is the LEGO book collection. I remember back in the 1990s when there were few printed resources for LEGO fans. The past 17 years have witnessed an explosion of LEGO books covering just about every topic. Because of this, I have resigned myself to the fact that collecting every LEGO book is not possible. I focus on content and emphasize collecting books that are historical nature. These items include LEGO history books, a few books documenting LEGO-sponsored events, foreign language biographies on Godtfred Kirk Christiansen (son of Ole Kirk), some Fabuland books, and even a set of hardbound auction catalogues (back when LEGOLAND Billund was auctioning off its antique toy collection). 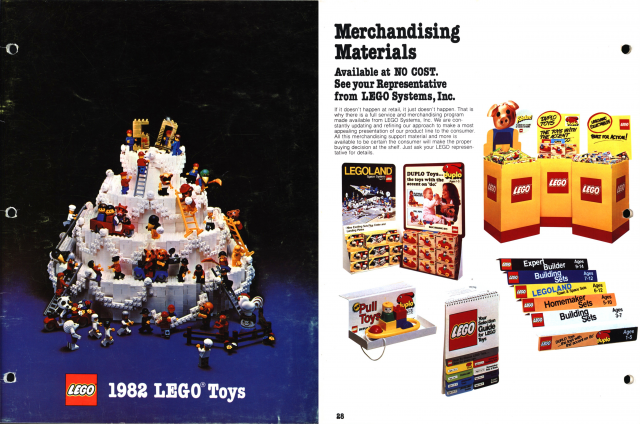 TBB: That’s simply an amazing collection Matthew, what got you started in the first place?

Matthew: I have multiple motivations for collecting. One of them is an interest in LEGO history. I had a chance to visit the Idea House in Billund a few years back, and I fell in love with the wooden toys. I had been aware of their existence, but something about seeing them in person made me want to get some. Since then, I have built up a very modest collection and also bought one of the plastic Chevrolet trucks. For wooden toys, I have the LEGO Garage, Esso Garage, 1940s “quacking” duck, 2 little ducks, 3 medium ducks, and a 1946 or 1947 red convertible that resembles a classic late ’40s Cadillac. 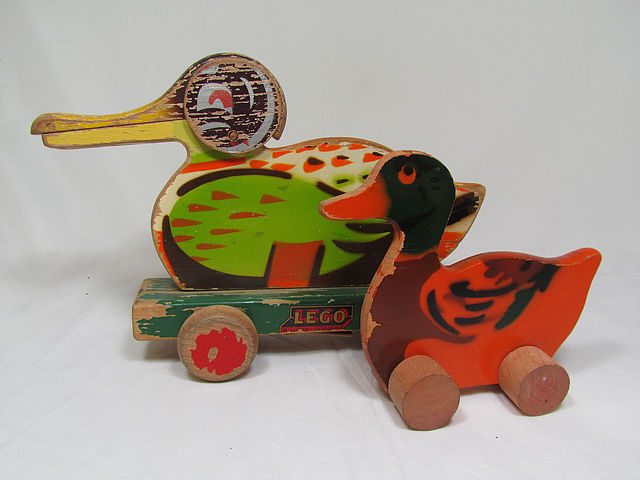 A pair of wooden LEGO duck pull-toys, including the famous “quacking” duck (circa 1940s)

The wooden toys led to a lot of research, but I was disappointed to find very little information online. Miniland.nl is a fantastic resource, but I have been told by some collectors that the information is not always accurate. You can sometimes find illustrations and/or historical information in books, but the information usually lacks real depth. When collecting the wooden toys, I ran into the issue of companies with extremely similar products, so I became interested in researching those companies as well.

My wooden toy collecting put me in touch with another fan of LEGO by the name of Bruno Todd. Bruno has an incredible collection, and his goal is to eventually open a museum and showcase these items there (the LGauge Museum). The spark that lit the fire of interest in collecting LEGO ephemera was talking to him. Working at an automotive research library, I am familiar with the informational value of what we call special collections. Being a librarian and a LEGO history buff, I decided to start collecting LEGO ephemera and filing it in such a way that might be useful to future research. 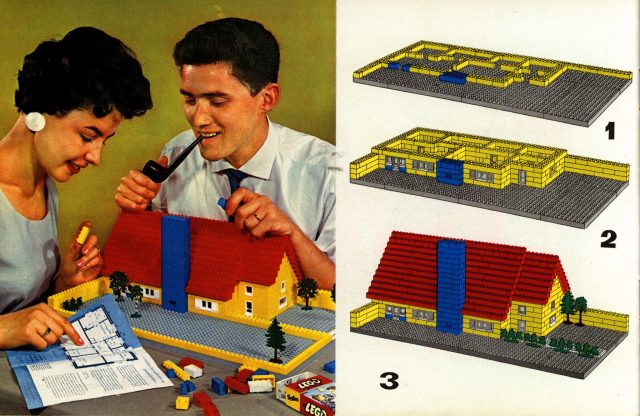 TBB: Have you considered an online digital library of sorts? At least it will be accessible to a wider audience in this new age world.

Matthew: The end goal of this collection is accessibility. I want everyone to be able to enjoy vintage LEGO advertising. To that end, I have been sharing scanned images with LEGO fan websites, such as Brickset.com and Brick Model Railroader. I knew Brickset would be a perfect fit when I came across their virtual library of LEGO ephemera. If any of your readers have some rare LEGO advertising materials they would like to scan and share they should definitely consider reaching out to them. 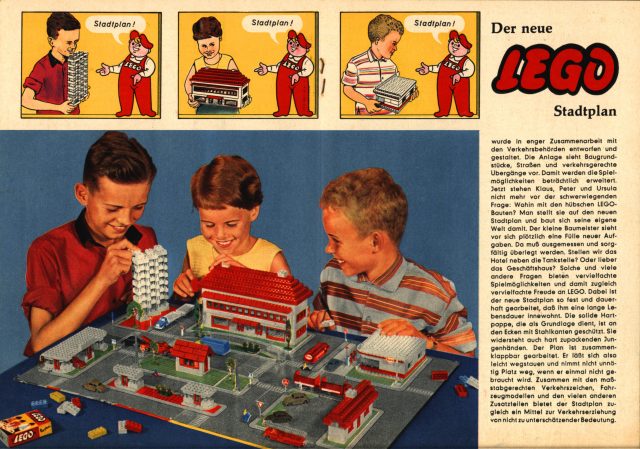 A Newsletter from Germany from 1959

TBB: We really love the noble cause you have and hope it all works out. It seems you almost have everything! Perhaps it’s better to ask, what don’t you have?

Matthew: The period of the 1950s through 1960s is probably the weakest part of my collection, so I add items here and there when I can. The 1980s and 1990s are stronger, and materials from the 2000s on up are more voluminous; This is because those items are much easier to obtain. Some regions also prove more difficult to collect for than others. I make an effort to collect regardless of theme or country of origin. LEGO is a global brand, so a LEGO library should be representative of that.

TBB: Where do you acquire your items from?

Matthew: I have collected the majority of items through eBay purchases, most often through bulk lots. I have also privately purchased a significant portion of materials, and friends in my LUG have been generous enough to donate items to the collection. I have to give a big shout-out to Chris Byrne who runs the BrickLink store, Bricks on the Dollar because he gave me a ton of items from the late 1990s-2000s, as well as a few from the 1960s.

TBB: What does the future hold for you?

Matthew: I’m trying to reach a point where I can trade or sell doubles to help build the collection even further. This is a challenge because there are definitely way more LEGO set collectors than LEGO ephemera collectors. I don’t really collect sets because they take up a lot of space, and I’m more of a builder. I do sometimes seek out vintage sets to resell and, again, to help offset some of the costs of building the library. It is really tempting to want to keep some of the items I find, though!

Sharing the collection is what makes collecting fun, and that is my long-term goal….to share with others so they can enjoy looking at this material too.

TBB: Matt, is there anything, in particular, you are looking for? If so, how should they contact you?

Matthew: I am especially interested in acquiring English versions of vintage LEGO Review magazines. Outside of that, I would be interested in acquiring articles and advertisements that appeared in magazines, comic books, and newspapers. It would be great to see what can be found in all corners of the globe. Such documents are a wealth of information! If you have an interesting article, advertisements, or anything else to share feel free to reach out to me via my Flickr account. (Ed: You may also want to visit Matt’s Flickr for more ephemera)

TBB: Thank you Matthew. It’s been a pleasure and delight to see what you’re doing for the greater good and knowledge for LEGO fans out there.