Bungie must have had some fascination with sassy robots when creating Destiny 2. Your Ghost companion, the hunter Cayde-6 (voiced by the great Nathan Fillion), and Exodus Black’s AI “Failsafe” always have something witty to say. Even the sniper rifle D.A.R.C.I. has some shade for actions such as quitting multiplayer when your team is losing. The lore for D.A.R.C.I., as well as its interesting, blocky aesthetic and teal tubing inspired my latest LEGO replica. 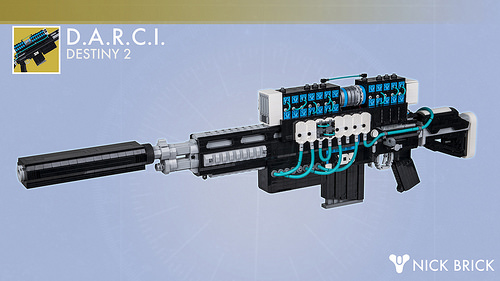 The build measures over 43 inches long and weighs 9 pounds. It took almost three months to build, but this was due to building every other Saturday, when I would be home from school. For a while, I wanted to build a LEGO prop that utilizes teal elements. As most of the rifle is black, gray, and white, the teal and dark azure details really popped, as does the green scope screen. Despite the LEGO-like look to D.A.R.C.I., its build proved difficult in even spacing of its rectangular details throughout. 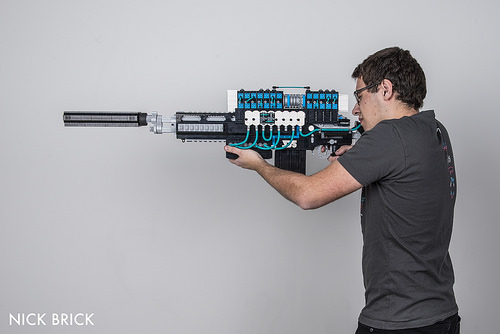 See its moving trigger, sliding charging handle, and removable magazine in action, as well as some D.A.R.C.I. gameplay for those unfamiliar with the game, in this video.

More photos of my LEGO replica are on Flickr.